New Release - SEAL FOR HER PROTECTION (SEALs of Coronado 1)!

By Paige Tyler April 19, 2016
I’m so excited to be here to talk about SEAL FOR HER PROTECTION, Book 1 in my brand new military romantic suspense SEALS OF CORONADO Series. 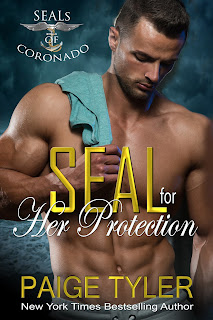 I write a lot of romantic suspense, much of it with military and action themes. But out of deference to my husband—a 20-year Army veteran—I’ve always refrained from writing anything in the Navy SEAL world. I typically lean on him for the guy’s perspective and military expertise in my suspense/action stories, and he was never thrilled with writing about something so far outside his wheelhouse, but then Cat Johnson (she of the Hot SEALs fame) asked me to write a story in her HOT SEALs Kindle World Series and that changed everything!
Cat has helped me out with so much, from boxed sets to promo suggestions, to the best way to increase my indie sales, I simply couldn’t say no when she asked me for a story. Besides I’ve wanted to write something involving SEALs for a while and this seemed like fate calling.
So I plied my husband with compliments and pizza until he agreed to help me, then dived into the world of the Navy SEALs. In between my other book commitments, I knocked out MY SEAL BODYGUARD and had an incredible time writing it. Once I got hubby involved in the research and action sequences, he started enjoying it too (though I’m sure he’ll never admit it).
When I got done writing with that first SEAL story, I knew I couldn’t stop. I was hooked! So I thought about it for a while and came up with the SEALs OF CORONADO, a series featuring the guys on SEAL Team 5 in San Diego and the women who fall for them. I figured everyone was showing all kinds of love to the SEAL guys on the East Coast, so I decided the ones on the West Coast should get the same attention. The first book in the series—SEAL FOR HER PROTECTION—hit the shelves on April 12th and I’m stoked! I couldn’t be more excited to plunge into the world of those hunky Navy SEALs! Hope you are, too!

He saved her from danger once before. Can he save her again, this time from danger he doesn't even see coming?

When investigative journalist Hayley Garner is kidnapped by terrorists, she's sure they're going to kill her. But in sweeps handsome Navy SEAL Chasen Ward to rescue her. After getting her to safety, he disappears into the night before she can even thank him.

Weeks later, while covering a story on the local navy base, Hayley runs into Chasen again. Even though she didn't see his face that night he rescued her, she can't forget his beautiful blue eyes. The attraction is immediate and intense, and Hayley finds herself falling into a fiery romance with the hunky hero out of her dreams. Guys like this aren't supposed to really exist, but Chasen does, and damn is he hot.

But ever since she got back home, Hayley has had the feeling someone's been watching her. Is it post-traumatic stress or does she have a reason to be afraid? Good thing she has a Navy SEAL to protect her. 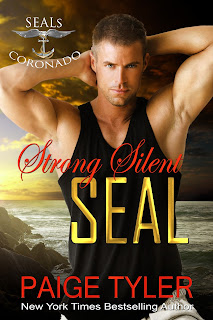 Wedding planner Felicia Bradford is in trouble. Mercenaries are holding her sister hostage and threatening to kill her unless Felicia helps them steal top secret information from the Navy’s Special Operations Headquarters. Having no other way to access the base, she pulls a gun on the first man in a Navy uniform she finds, demanding he get her through the gate.

Navy SEAL Logan Dunn just got back from a mission in Syria and is looking for a little down time to relax. That plan goes out the window when a beautiful woman shoves a gun in his back and begs him to do something he can tell she doesn’t want to be part of. Logan does what any Navy SEAL would do in the same situation—he saves the girl and takes out the bad guys.

But their actions that day kick off a crazy chain of events, including a fast-burning whirlwind romance, an out-of-control sister, an insane covert plot involving a defecting Russian pilot, a mercenary bent on revenge, and a sunrise wedding for a bride who never wakes up before noon.

Getting through her sister's kidnapping will look like a piece of cake compared to what comes next.