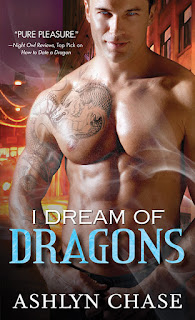 Happy release day to Ashlyn Chase! To celebrate the release of I Dream of Dragons, the first in her new Boston Dragons series, we've got an excerpt to share.

Amber had finally reappeared in the airport bathroom and went straight home to her apartment building. She thought she must be losing her mind and just wanted to lie down—after having a much needed drink. She ignored the sign on the elevator door. It was small print and official looking. Probably a notice that the landlord would be spraying for bugs or something. She spied the same notice on each tenant’s door as she fumbled with her keys. At last she let herself into her apartment and grabbed the notice, intending to look at it later.

Dropping her flight bags outside the kitchen, she waltzed in and took a wine spritzer out of the fridge. She glanced at the notice on her way to the living room and almost dropped the bottle of spritzer. An eviction notice?

“I’m right behind you,” a woman said.

That caused Amber to whirl around and repeat herself, loudly.

“I said, I’m right here!” The white-robed woman slapped her hands over her ears. She had long, thick, white hair. Her robe was belted with a vine of ivy.

“Hey, aren’t you the businesswoman from the bathroom? Brandee’s friend?”

“Sheesh. Have a seat, girlie. We need to talk.”

Amber hesitated. The woman wasn’t carrying a weapon, although something about her seemed ultimately threatening. As if to affirm the feeling, thunder rolled and the sky outside her window darkened. She stumbled backward and sat down hard on her beige linen sofa.

“That’s better,” the woman said. “Now, I’m aware you don’t know who I am, so I’ll introduce myself. I don’t have time for your disbelief, so save me the trouble and just go with it. Okay?”

“Good. The truth is, I’m Mother Nature. Those who know me better than you do call me either Goddess or Gaia. That’s my name. You should begin by calling me Mother Nature just to drive the point home.”

Amber heard herself say, “Okaaay,” in a little girl’s voice.

“Here’s the good news. You won’t have to worry about that eviction notice. I have a job for you and it won’t matter where you live. I know you’re getting disenchanted with your job as a flight attendant.”

The woman smirked. “Really? I’m Mother Freakin’ Nature. If people were meant to fly I’d have given them wings.” She cocked her head. “Why did you become a flight attendant anyway?”

“You mean you wanted to meet a rich businessman and do a little traveling before you settled down. How’s that working out for you?”

Her back went up. “He doesn’t have to be rich.”

“But relationships with men in general aren’t working out. Right?”

She sighed. “Not so much. Every guy I get close to assumes I’m cheating when I’m out of the country and eventually finds a ‘back-up’, or he’s just pissed because I’m not around much. And don’t even get me started on the pilots.”

“So, how much of the world have you actually seen?”

Amber grimaced. “Pretty much the same routes over and over again.”

“So…nothing but the same foreign airports and hotels.”

“Of course I have a point. I always have a point. I don’t chat with mortals for my health. Speaking of my health, spreading all that noxious jet fuel so close to my ozone layer is the most harmful thing you can possibly do to me. Did you know that?"

When Rory Arish and his two fiery dragon siblings are driven out of their ancestral Irish home, it seems their luck has run out—until they arrive in Boston and find a paranormal-friendly apartment building. Finally, Rory has a place to call home. There’s only one problem: Rory’s new lair has simultaneously been rented to an infuriating woman who is as stubborn as she is beautiful and will not leave ‘her’ apartment matter how steamed he may be…

Amber McNally is a down-on-her-luck flight attendant. She needs this apartment, and not even a fire-breathing dragon with his Irish charm and scorching good looks is going to scare her away. Holing up in their respective corners, a battle of wills ensues. Who will be the first to blink…or give in to their off-the-charts chemistry and decide to make this unorthodox living arrangement a little more permanent?


About Ashlyn Chase:
An award winning author, Ashlyn Chase specializes in characters who reinvent themselves, having reinvented herself numerous times. She has worked as a psychiatric nurse, and for the Red Cross, and has a degree in behavioral sciences. She lives with her true-life hero husband in beautiful New Hampshire.