He lives by a schedule
Aubrey Burke is on the run from an about-to-be-disastrous mistake when resort owner Hugh Shaughnessy catches her climbing through his office window. Until Aubrey tumbled into his life, Hugh had relied on work and discipline to safeguard a heart damaged by family tragedy. Now his careful world will never be the same.

She lives for the moment
Hugh's approach to life and love is the opposite of Aubrey's, but she soon finds herself falling hard for the handsome hotel mogul. There's a darker reason behind her "live for today" attitude than Hugh could possibly know, but for the first time Aubrey dares to hope this man's love might make it worth taking a chance on the future.

I have to tell you, I am SO excited about this book!  I know, I know, all authors say that on release day but it's the truth.  "Love Walks In" was probably the hardest book that I've written in a long time.  And for the life of me, I don't know why.  The characters weren't talking to me for a long time and I was getting frustrated.  But once they started?  I can honestly say this ended up being the LONGEST book I've ever written because then they wouldn't be quiet!

As the second book in the series, it's still a standalone and this time we're focusing on the second eldest Shaughnessy - Hugh.  He's extremely regimented and a wee-bit stubborn.  Hugh owns a line of boutique resorts and he's on the verge of closing a huge business deal with an exclusive wine distributor when Aubrey falls into his lap.  Almost literally.  She's his complete opposite and no matter where he turns, there she is.

My stories are all contemporaries and fairly light-hearted with minimal angst, but "Love Walks In" is fairly emotional and our couple is dealing with a lot of deep issues - both alone and together. I'm not going to lie to you - I cried. 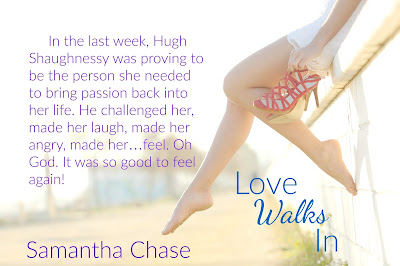 "Love Walks In" comes out tomorrow - April 5th - but here's a small excerpt for you:

Aubrey woke up the next morning and instantly groaned when she realized last night wasn’t a dream. She had cried all over Hugh until she had practically collapsed. Then he had carried her to her bed and gently put her down, kissing her forehead. And just when she thought he had taken his chance to escape, he was back with a glass of water for her. He made sure she was comfortable, kissed her gently again, and then he was gone.

Ugh. The poor man must be wishing he had just let her rob his office and not interfered. She was a mess. A stinking hot mess. How in the world was she supposed to face him this morning, knowing he must think the same thing of her? Aubrey eyed the balcony, but it was too high to escape that way.

“No more running,” she murmured as she climbed from the bed, still wearing last night’s clothes. It wasn’t particularly early—eight a.m.—but she wasn’t sure if Hugh was an early riser or not. Hopefully he was already down at the office. She’d shower and get herself feeling human again before seeking him out.

Thirty minutes later, dressed in one of her new outfits—black capris and a sky blue sleeveless blouse—Aubrey stepped out into the living room. And froze.  Hugh was sitting at the breakfast bar drinking a cup of coffee and reading the paper.

“Good morning,” he said. “I wasn’t sure if you were big on breakfast, so I had them send up an assortment of food—fruit, cereal, muffins, that sort of thing. If you’d like something hot like eggs or pancakes, we can have them sent up, too.”

He wasn’t asking her to leave.

He was offering her breakfast like everything was completely normal.

Nervously tucking her hair behind her ear, she straightened in her spot. “Listen… Hugh, about last night…”

He waved her off. “Today is a new day,” he said with a sincere smile. “Okay?”

There were so many things Aubrey wanted to say, but she took the lifeline he extended, returning his smile. “Okay.” She walked over to where the breakfast tray was. Her practical side told her to have some of the fresh fruit, but the other side urged her to have one of the giant muffins.

“There’s banana nut, blueberry, and chocolate chip,” Hugh said as he watched her.

“As much as I would love the chocolate chip one, I don’t think it’s quite right for breakfast,” Aubrey said, sighing as she picked up the plate of fruit. Before she knew it, Hugh was beside her, taking the plate from her hands. “What are you doing?”

He leaned in and spoke to her in an exaggerated whisper. “You’re technically on vacation. It’s okay to have chocolate for breakfast. Besides, I won’t tell.”

She looked at him and couldn’t help but giggle. “It just feels so wrong.”

Now it was Hugh’s turn to chuckle. “It’s okay. Live a little.” Without a word, Hugh put the muffin on a plate, handed it to Aubrey, and took her by the shoulders, directing her to the breakfast bar. “Sit. Eat.”

And she did. It was quite possibly the best muffin—or breakfast—she’d ever eaten. It felt completely decadent, and it wasn’t until she was halfway through it that she realized Hugh was staring at her. Swallowing the last bite, she looked at him. “What?”

His face was resting in his hand and he was smiling—he seemed to do that a lot. At least, he always seemed to be smiling at her.

“It’s good to see you enjoying a meal.”

Aubrey looked at him quizzically. “What are you talking about? I always enjoy my meals.”

Hugh shook his head. “I know I can’t speak for how you normally eat, but since you’ve been here, you’ve been very reserved while you ate. This muffin? It was a completely different experience.”

She wanted to be a little bit offended by his observation, but couldn’t. “If you can believe it, that’s the first time I’ve ever eaten baked goods for breakfast. It was never allowed.”

Hugh’s shocked expression was almost comical. “How is that possible? What about bagels?”

She laughed. “That’s not a baked good.”

“Technically, it is. Bread is baked, therefore toast is a baked good.”

Aubrey rolled her eyes. “Okay, then to be clear, I’ve never eaten the kind of baked goods one would find in an actual bakery for breakfast.”

“That borders on child abuse.”

So there you go!  A peek at tomorrow's new release!  I hope you check it out and fall in love with this family the way that I have.  Happy Reading, my friends!!
BUY LINKS:
Amazon:  http://amzn.to/1TJ0YLB
B&N:  http://bit.ly/1LpuEOp
iTunes:  http://apple.co/1QWdVCA
Kobo:  http://bit.ly/1pmXWTq 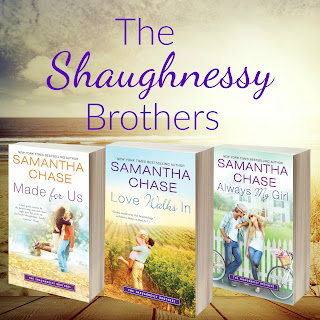