A Little Love on the Oregon Coast

I adore the Oregon Coast...of course, I live here so I may be a little biased. The temperature rarely crosses outside of the 35-75F range. And the weather is always entertaining. We average 85-100 inches a year in most places out here (compare with 35 inches in New York and Seattle), but it bothers very few of us who actually live on the coast. For one thing, it keeps the pollen washed out of the air most days for those of us with allergies and it also keeps the tourist-count down for much of the year (nothing as fun to make jokes about as tourists, no matter how much our town relies on them).

There is a stark beauty here that's hard to deny as well.


And as much as I love the coast, it only recently struck me that I'd never set a story here. Well, I've done better than that: I've new set a whole series and the first book has just been released. 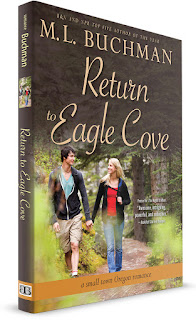 In Return to Eagle Cove: a small town Oregon romance Jessica Baxter has returned for her mother's fourth wedding to her father. It's an eye-roller of an event that has taught Jessica that nothing is permanent. Of course she hasn't counted on the teenage crush that Greg Slater always kept hidden until he'd grown up into a very handsome chef. But Greg is not ready for the moment when Jessica walks into the diner that his father the retired judge runs.


The old brass bell screwed into the top of the diner’s front door rang like a small ship was coming into port. Morning service peaked as usual around eight and had now tapered off to just a few lingering diners.

Greg glanced at the big-face clock above the cash register—9:57—and suppressed a groan. The Judge’s rule was that if you were in the door by ten, you could take as long as you wanted. If it was ten sharp plus a second, you were turned away—“Fair is fair.” Maybe they’d be quick; he’d had an idea for a savory roulade that he wanted to try making.

Greg turned back and had to blink, then blink again. The morning sunlight shone through the front window and silhouetted two dazzling blondes, their hair practically set afire by the sunlight streaming in from behind them.

Then his eyes adapted as they moved farther into the room.

And a woman he hadn’t seen since the day she’d left for college, but he’d know anywhere.

Jessica matched his own five-ten and her hair, instead of being the waist-long waterfall he’d remembered, now floated about her shoulders in choppy wisps that framed a face of high cheekbones, full lips, and eyes that sparkled with mischief.

Halfway across the old linoleum floor, she stopped and looked at him.

And he couldn’t do a thing about it.

“Does he do that to you a lot?” It was starting to get unnerving. In very short order, it would start pissing Jessica off. He’d been three years behind her in school. She’d dated his older brother for a while—he’s the one who earned her first kiss at fifteen, but not all that much more. Her prior visits home hadn’t overlapped with either brother being here, though she’d eaten the Judge’s breakfasts before and had been looking forward to some comfort food since they’d turned west across the Willamette Valley. Her lemon-curd brownie from Loretta’s in Chicago was many hours behind and much too far away.

“Well, it had better be us and not just me. We are two fairly dazzling women after all. Besides, if he does it much longer, he’s likely to get a dinner plate cracked over his skull.”

Greg Slater shook himself like a wet dog and replaced his gape with a cautious smile. He’d done a lot of growing up since she’d last seen him. The gangly kid—who’d spent large portions of his freshman year in the principal’s office—had turned into such a decent-looking guy that she might not have recognized him if they’d passed on the street.

“Jessica.” Her high school nickname was one of the things she’d left behind along with Eagle Cove. She and Jessie Hamilton had been in a lot of classes together and everyone had called them both Jess despite their opposing genders. “I’m not a man, so don’t expect me to answer to a male nickname.”

“No you’re definitely not—” she could see where his eyes were going, along with his smile. She gave him a second to recover, then two. She didn’t give him three.

Jessica picked up a dirty plate from a freshly vacated table. It had a pool of syrup and a large splotch of leftover ketchup on some crispy hash browns. With a quick grab, she captured both the front of Greg’s apron and his belt—maybe his underwear as well but she wasn’t going to think about that. She tipped the plate into the space over his flat abs and managed to shove it half down his pants for good measure.

Jessica ignored his squawk of protest, letting go as he backpedaled away and almost landed on Cal Mason Sr.’s lap right in the middle of eating his tall stack.

“Let’s sit over there, Mom,” she waved hello at the Judge before they sat down. He flapped a spatula back in her direction.

The Judge never whispered, so she and the half dozen other late morning diners could hear him clearly when he told Greg, “Lady’s got your number but good, son.”

Greg had been a real slouch, the classic underachieving little brother. A decade and a half later and he was still in town working as a waiter for his dad. He’d grown up lean and dark. His neat black hair hung to his collar and the close-cropped beard accented a strong chin. He’d have looked Keanu Reeves’ dangerous if it wasn’t for the easy smile that still hadn’t quite gone away. Greg Slater had come a long way from being fifteen…other than being another Eagle Cove failure-to-launch kid.

The last time she’d seen him, he’d been just starting his sophomore year in high school and panting after Dawn something—the hussy of the class. They probably had a trailer down at the end of Shearwater Lane that was slowly returning back into forest in a state of semi-decay, with a half dozen little Greggies bouncing about.

Maybe she should track down Greg’s big brother Harry when she returned to the real world. Last she’d heard he was still single and practicing law in New Orleans…not that she was that interested in living in New Orleans, but it was a great place to visit. Maybe have some fun while she was there. She could even set up a few interviews in the jazz clubs and then write off the trip as well as selling a couple of articles to the trades. A couple of human interest stories, maybe find something unique enough to turn into a feature as well.

Though that was getting harder and harder. A few years ago she’d been able to get an article by the Rolling Stone Magazine editor way more than twice a year. And AAA used to give her bimonthly space in their magazines, but that had dried up as well. The collapse of print journalism was finally catching up with her.

Maybe if she’d been a straight newsie, she’d have stood a chance, but she wasn’t. She’d always enjoyed the special interest story. Someone or some place that had found a way to be exceptional. A hot band, an innovative inventor, an amazing kid…those were the stories that had fascinated her. They’d shaped her career. And now they were “fringe” stories that didn’t command much share in the shrinking print journalism bucket.

E-magazines were worse, paying crap. The Huffington Post had offered her a regular blog column, for no pay at all, which said too much about the state of that part of the industry. Maybe she should do a piece on The Puffin Diner; there was a laugh. That was probably below even HuffPo’s standards.

“So…” she took a deep breath and decided that since she didn’t have a choice about being in town for the whole week that she’d agreed to come for anyway, she might as well put a good face on it. It wasn’t like the editors of the world were in a bidding war for her next story.

She and her mother settled at a clean table beneath a watercolor painting of The Puffin Diner, one of Ma Slater’s last, based on the date. “Not for Sale” was in bold type on the little card taped to the wall close beside the frame.

Greg retreated. Hell, he didn’t retreat, he ran away. The old Monty Python gag about “That’s one nasty rabbit” came too easily to mind. Jessica Baxter was beautiful and looked all sweet and…fluffy.

Then she shoved a plate of cold food down his pants, ramming it right down inside his underwear in front of everyone. Cal Sr.’s howl of laughter had followed him right back through the service door into the side hall.

The one bathroom was occupied, so he detoured through the service door into the kitchen, his only other option.

Judge Baxter kept tending his omelets, “temperamental things omelets, can’t look away from them for a second.” But Greg also knew from experience that the Judge missed nothing of what happened in his restaurant.

With nowhere else to go, Greg moved over by the clean-up sink and shed the apron and his pants. At least his underwear had caught most of it. He shed those, wiped himself down with a couple of wet paper towels and pulled his pants back on commando. Greg wasn’t really a commando sort of guy.

His shirt had taken the brunt of the attack. He stripped it off over his head and chucked it into the laundry bag along with his underwear and yesterday’s service apron. He crossed to where he kept a spare shirt on one of the dry good storage shelves, but had never thought to keep underwear there as well. Greg yanked on the fresh shirt and buttoned it up.

“Not a word,” he muttered at the Judge as he wound a fresh apron about his waist.

“The court will maintain a respectful silence at this time,” the old man said with a tone as dry as week-old toast.

M. L. Buchman has over 40 novels in print. His military romantic suspense books have been named Barnes & Noble and NPR “Top 5 of the year” and twice Booklist “Top 10 of the Year,” placing two titles on their “Top 101 Romances of the Last 10 Years” list. He has been nominated for the Reviewer’s Choice Award for “Top 10 Romantic Suspense of 2014” by RT Book Reviews. In addition to romance, he also writes thrillers, fantasy, and science fiction.