The Day the Rock Star Came to Town

By Pamela Sherwood March 14, 2016
As a longtime LA resident, I can admit that the city has its faults, including crowds, smog, traffic that seems to get worse by the year… but every now and then, something pretty awesome can happen here. Like a bona fide rock star stopping by to give a free lunchtime concert for his fans. Just two weeks ago, Elton John performed for about an hour in the parking lot of Tower Records on the Sunset Strip, to promote his new album and thank West Hollywood for supporting the AIDS Foundation. 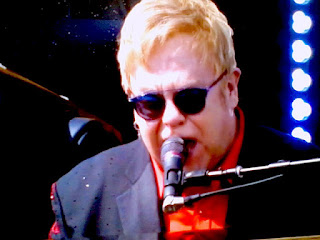 Not surprisingly, a huge number of people turned out, cramming the parking lot and lining up on the sidewalk outside Tower Records.  Even better, AOL live-streamed the whole event for those who couldn’t be there in person, so guess how I spent my lunch hour? 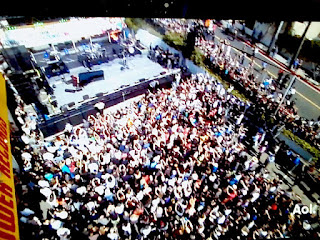 I have a soft spot for Elton John’s music, which got frequent play in our house while I was growing up. “Bennie and the Jets” was one of my father’s favorites, “Tiny Dancer” one of my sister’s, and everyone liked “Crocodile Rock”! And it’s always amazed me that, even at his most flamboyant—all feathers, sequins, and platform shoes—Elton (in partnership with Bernie Taupin) could write things as simple and soulful as “Harmony,” “Your Song,” and “Candle in the Wind.” 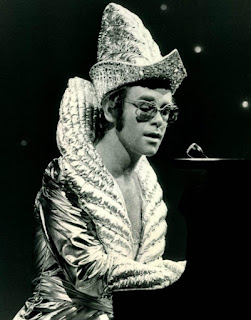 While less outlandishly dressed than in his youth, Elton was still plenty visible in his glittery black and red get-up! I missed some of the visceral excitement of being on-the-spot in West Hollywood,  but I couldn’t complain of the view I had sitting in front of my computer.  For one thing, I got some great close-ups of Elton and his band—the same guys who’ve been playing with him for years. 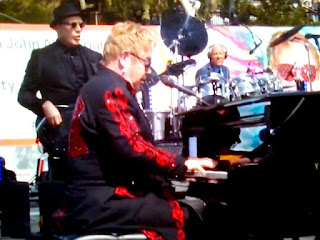 Not to mention close-ups of Elton’s hands in motion, moving so fast that they were literally a blur over the piano keys! He tore his way through about 13 or 14 songs, old and new, and kept up the energy from start to finish. In between numbers he was disarmingly humble and accessible, reminiscing about his first gig in LA—playing the still-extant Troubadour Club, 46 years ago! 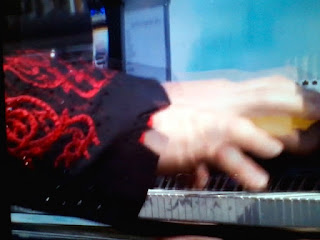 The crowd’s response was enthusiastic and appreciative. I saw fans of all ages rocking out and singing along. Then, towards the end, Lady Gaga—in town for the Oscars—came out to sing part of  “Don’t Let the Sun Go Down On Me” with him. That, too, got a round of applause. He closed with “Saturday Night’s All Right for Fighting,” then made his exit. No encores—despite the chants of “Elton! Elton!—but then, every performer worth his salt understands that it’s best to leave the crowd wanting more.

So, all in all, a rockin' way to see out February and to leave a warm glow and the memory of some great songs lingering into the Ides of March!