His to Keep by Terri L. Austin

It seems like Brynn Campbell has been waiting forever to have her story told. It's finally here! Brynn has her own hero. But he's not exactly heroic. He's edgy and aggressive--not Brynn's type of man at all. But Iain Chapman has a plan to win her over. And exploit her connections while he's doing it. 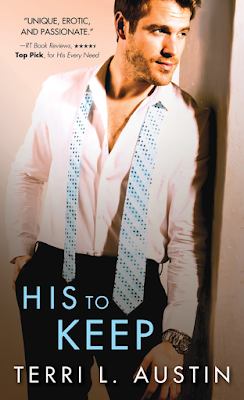 Iain wasn’t just rough around the edges—he was uncivilized, despite all the elegant trappings and expensive suits. And Brynn wanted more of it. She wanted Iain in full-on barbarian mode.
She wanted to be taken.
Filthy rich British bad boy Iain Chapman made a name for himself as a ruthless businessman, but if he can secure an investment from Vegas powerhouse Trevor Blake, Iain could take his business to the next level. Solution? Hire beautifully timid corporate trainer—and Trevor’s sister-in-law—Brynn Campbell and seduce his way to success.
Brynn’s everything Iain is not: kind, delicate, decent. But she’s also got a taste for something a little beastly, and it doesn’t take long for Iain to break through her every inhibition. Brynn was supposed to be his pawn, but as Iain gets closer to his goal, he begins to realize he’s not ready to let her go, not now, not ever—even if it costs him everything.


Now I'll playfully tease you with this little excerpt, like the minx I am.
Grasping the doorknob, Brynn tried once again to get a grip on her nerves. She didn’t have much success as she quietly stepped into Iain’s office and took a second to study him as he sat behind his desk. He concentrated on the computer screen, and his brows dipped toward the bridge of his nose. He was just as gorgeous as she remembered. “Hey.”
When he looked up and saw her, his expression cleared and a predatory glimmer dawned in his eyes. “Brynn, good to see you—although I’m surprised. To be honest, love, I thought you might bottle it.”
She walked farther into the room. “What does that mean?”
“I thought you’d chicken out and refuse to come back.” Boy, did he have her number. “Glad you made it. I’d hate to get you in trouble with your boss.”
She let that slide without comment. “Are you ready to get started?”
He pushed away from the desk and stood, gathering his jacket. As he walked toward her, he slid it on and tugged at each cuff. “Absolutely. Shall we go?”
“Go? No, I brought you a binder.” She held it up. “I even have a list of exercises.”
Iain removed the notebook from her hands and tossed it in the chair. “No need for all that. We’ll wing it.”
“You mean ignore the lessons? But there are helpful worksheets in there, guided instructions.”
“Look, Brynn, I don’t do textbooks and exercises, right? I prefer a more realistic approach. So while we look at a few potential buildings I might be interested in buying, you can teach me how to be a smashing leader.”
“How am I supposed to do that without the manual?”
“You wrote the manual.” He circled her temple with
his finger. “It’s all up here, innit?”
“I don’t believe this is a good idea.”
“I happen to disagree. And the customer’s always right.”
“Not in this case.”
“Especially in this case, as I happen to be the customer.” Iain grabbed her hand and walked through the outer office, dragging Brynn behind him like a toy wagon.
Amelia pursed her lips in disapproval. “It’s best to go along, honey. He always gets his way.”
Employees in the front office watched in silence as Brynn tried to pull free from his grasp, but Iain’s grip, while not tight, was unyielding. Keeping her head down, Brynn felt the rising tide of heat cover her neck. She hated this, hated being the focus of everyone’s attention. If she’d just stood up to Cass in the first place, none of this would be happening.
Iain led her to the elevators. Once he punched the button, he finally let go of her hand. He hadn’t been rough, but she flexed her fingers anyway. He glanced down at her. She wouldn’t look at him.
When the doors opened, Iain gestured for Brynn to get in first. She did, her shoulders rigid, her back straight.
He climbed on and instead of  facing  the  doors, he planted himself in front of her, his big, lean body demanding her attention. “You’re angry.”
“I don’t appreciate being manhandled. And I don’t like being made a spectacle of in your office.” She refused to look at his face and kept her eyes trained on the numbers as they lit up on descent. “I’m here in a professional capacity.”
He took a step closer, completely disregarding her personal space, blocking out the numbers, and forcing her to meet his gaze. “What do you think you can teach me, professionally speaking?”

Hope you enjoyed this little snippet of His to Keep. Amazon | Barnes and Noble | iBooks| Kobo