New Release: You and Only You by Sharon Sala 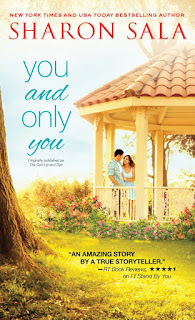 Sharon Sala's You and Only You* is out February 22nd! To celebrate, we've got a a sneak peek for you to read:

It was still raining when Mike drove LilyAnn home. He had the heater on inside the car, making the windshield fog up inside. He was hot for the woman in the seat beside him, and she was as cold as that rain falling outside. Desperate for something to talk about, he picked the first thing that came to mind.

“That Rachel Goodhope is something, isn’t she,” Mike said.

Lily frowned. She had not been thinking about Rachel and was just the tiniest bit irked that Mike had.
“How so? I hadn’t given her another thought,” she muttered.

Mike laughed. “I just meant that she’s something of a man-­eater and so outrageously blatant about it. Old Bud is either oblivious or super confident about their relationship. You can tell just by the way she acts that she’s always looking for the next Mr. Right.”

Lily frowned. “How do you know that?”

He shrugged. “I don’t know. I guess it’s just a guy thing. So, did you have a good time tonight? I know I sure did. You’re easy to be with, lady.”

Lily smiled. “Thanks. You’re a really good friend to me, Mike. I appreciate that.”

Lily was a little taken aback by the tone of his voice, but then they were pulling up in her driveway and it was too late to ask what was wrong.

“Thank you for supper.”

Mike stared at her face in the glow of the dashboard light, wishing to God he had the right to pull her into his arms for a good-­night kiss.

“Yeah, any time,” he said, and settled for running his finger down the side of her face. “If you figure out that change-­your-­life stuff and need my help, you know where to find me.”

She nodded. “Thanks again,” she said, then ducked her head and ran through the rain.

As soon as she turned on the porch lights, Mike backed out of the driveway, then pulled up into his drive and got out. He was so weary of hiding his feelings that it was depressing. He went inside and turned on the television, then went to make some coffee. He needed to work on the books for the fitness center, and it would give him something to think about besides the fact that his next-­door neighbor was probably taking off her clothes.

*Previously published as Curl Up and Dye

***
Sharon Sala, who has also written under the name Dinah McCall, has 85-plus books in print, published in four different genres—Romance, Young Adult, Western, and Women’s Fiction, and her Young Adult books have been optioned for film. She has been named a RITA finalist seven times by Romance Writers of America, and in 2011 they named her the recipient of the Nora Roberts Lifetime Achievement Award. Her books are New York Times, USA Today, Publishers Weekly bestsellers and published in many different languages. She lives in Oklahoma, the state where she was born.