New Release: How to Wrangle a Cowboy by Joanne Kennedy 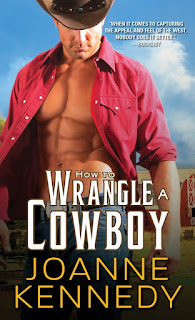 Hello Casa authors and romance readers! It’s been a long time since I appeared here, and I’m sorry for that. Life got a little complicated, and I missed you all, but we’re not here to talk about me.

We’re here to talk about cowboys.

Actually, we’re here to talk about one cowboy in particular: Shane Lockhart, the eldest of the Decker Ranch cowboys, and the last to have his story told.

But let’s not just talk. Let’s spy on him at the Lazy Q Ranch, where he just escaped a disastrous dinner with Lindsey and the fiancé who doesn’t deserve her...
***

Shane fled to the barn and did his best to calm the simmering rage Lindsey’s fiancé had set to boiling by brushing one of Grace’s old horses. With every stroke of the brush, he asked himself another question. How could Lindsey love such a man? Hadn’t she learned anything from her grandparents’ marriage? Relationships were based on love, and there was no way she could love that jerk.

And why did it bother him so much if she did?

He’d just begun to feel better when he heard a squeaking sound from behind the barn. It sounded like some small creature had hurt itself and was smothering a cry of pain. Leaving the horse to doze in the cross-ties, he ran to the back door to check.

The small creature was Lindsey. Slumped on a bale of hay just outside the big back door, she was weeping as if everyone she loved had left her and everything in her life had gone wrong.

In that moment, Shane didn’t know where her fiancé was, and he didn’t care. All he could see was the little girl he’d known for so long, crying as if her heart would break. And he knew that bastard was the reason.

There wasn’t anywhere to sit but the hay bale, and there wasn’t anything to do but hold her. He didn’t mean anything by it. He just couldn’t stand to see her cry.

She leaned into him, her body warm and lithe, and he cursed himself for the thoughts that ran through his mind. This was Lindsey, his boss’s daughter. A girl he’d known half his life.

But she wasn’t just a girl anymore, and no matter how hard his brain tried to deny that fact, his body knew the truth. While she struggled to explain, in broken words blurred by sobs, why she was going to marry a man who didn’t deserve her, Shane’s traitorous body told him to stroke her hair, to hold her close, to murmur the soothing, comforting nonsense he used to calm his horses.

She finally exhausted herself with weeping and slumped against him, her head on his shoulder. There in the quiet dark, he wrapped his arms around her, looked up at the moon, and wondered what the hell he should do. He didn’t mean to kiss the back of her neck. He didn’t even realize he was doing it until she twisted in his arms and he was suddenly kissing her face, her cheeks, her lips.

Her lips. They were warm under his own, so soft, so yielding. She felt so sweet, so hot. Needy. Her hands slid under his shirt, stroking and smoothing, and his wandered everywhere—to her hips, to her thighs, to her beautiful breasts.

It felt so right, and he knew it was the same for her by the noises she made, little mews of desire and happiness. Her body responded sweetly to his touch, trembling and yielding, pressing close to his. As his hands swept over her subtle curves, he had the dangerous thought that they’d been each other’s destiny all along. Something vibrating in the air between them made him sure of it.

Despite the prospective bridegroom back at the house, he knew one sure thing in that moment: she was his, all his, and had been all along. Certainly he belonged to her. How had he not known that? How had she ever given herself to anyone else?

He was about to speak when she pulled away, leaping to her feet as if the hay had burst into flame.

“Married.” She panted the words through lips bruised by kisses. “I’m supposed to get married. I promised…”

Clapping a hand over her mouth, she ran for the house.

"Kennedy is making a name for herself in the field of Contemporary Western Romances, taking her place beside Linda Lael Miller and Carolyn Brown." -Booklist for Cowboy Crazy

The last thing this cowboy expected…
Inner-city veterinarian Lindsey Ward always loved visiting her grandfather's Wyoming ranch, so it breaks her heart to have to sell it. She'll miss the scent of hay and sagebrush under the wide-open sky, but at least the sale will help fund the clinic she's always dreamed of.

Was to get roped by a city girl.
Ruggedly handsome foreman Shane Lockhart and his adorable son aren't making it any easier for Lindsey to focus on what has to be done. It's exhilarating going toe to toe with a rough, tough cowboy whose stubborn idealism matches her own, but it's Shane's tenderness that might tip Lindsey's heart over the fence.

Joanne Kennedy is the RITA-nominated author of ten contemporary Western romance novels, including Cowboy Trouble, Tall, Dark and Cowboy, and the Cowboys of Decker Ranch series, which began with How to Handle a Cowboy, one of Booklist’s “Best Romances of the Decade.” Joanne lives in a secret mountain hideout on the Wyoming/Colorado border with two dogs, a cat named Earl, and a husband who is an airline pilot, military officer, and volunteer fireman. When not loving a man in uniform, she occupies her obsessive personality with cowboys, quarter horses, hiking in the mountains, and squirrels.

Praise for How to Kiss a Cowboy:
"Kennedy's characters are sexy, smart, troubled, flawed-real. If you are a fan of Western romances, Joanne Kennedy should be at the top of your list of favorites." -Fresh Fiction
"The rough-and-tumble world of the Wyoming rodeo circuit is brought vividly to life. Readers will love her intensely complex characters and depictions of deep emotion." -Publishers Weekly