Life, Love and Babies - A Reissue

By Samantha Chase February 11, 2016
Long before I started writing romance, I was a reader.  An avid reader.  Okay, I was fairly obsessive and never went anywhere without a book!  Whew.  There, I said it.  I was big on reading Harlequin romances and one of my favorite tropes had to do with babies.  So sweet.  So adorable.  So much turmoil they can cause in the lives of our hero and heroine.

I had started writing The Baby Arrangement a very long time ago but never finished it.  Then, back in late 2013, I decided that I wanted to put out a Valentine's Day novella and went into my trusty book of WIP's (works in progress) and found this story.  It hadn't been written with Valentine's Day in mind, but with a couple of modifications and finally giving it an ending, I think it turned out pretty well!

What do you do when a baby is dropped on your doorstep and you're not sure if the father is you or your wayward brother?

If you're Derek Sloan you freak out as your perfectly organized world suddenly becomes filled with chaos. With his brother nowhere to be found and fatherhood is suddenly thrust upon him, Derek is desperate for any help he can get.


What do you do when the man you've been crushing on suddenly has a need and you are the only one he wants to fill it?

You do a little happy dance and pinch yourself to make sure you're not dreaming! For five years Kayleigh Mitchell has longed for her boss to notice her and now that he has, she can only hope that he'll come to see her as more than a temporary solution to his problem, but someone that he wants around for the long haul.

So readers really loved that story and wanted more babies and so I thought, why not?  And - believe it or not - I had another unfinished book in my file and it became "Baby, I'm Yours".  No holiday theme to this one, just a good ol' secret baby/never thought we'd see each other again plot.

Nicole Taylor thought she was merely hosting a pre-wedding dinner for her best friend. What she ended up with was a face to face encounter with the man she shared  her one and only wild night with three years earlier-and her world turned upside down. Now she has to introduce him to the daughter he doesn't know he has and find out if she can trust in the hope of a family for her little girl.

Josh Masterson has no idea why he lied that night three years ago. Nicole was everything he ever wanted in a woman and he has been regretting his decision ever since. Now he has the perfect opportunity to make up for it. He had no idea that he has fathered a little girl with Nicole, but now that he does, he isn't going to just walk away. He made a mistake all those years ago and now he is determined to show Nicole there really is such a thing as love at first sight and happily ever after.

Well you can't just have two in a series, so I figured why not make it a trilogy!  "Baby, Be Mine" was written specifically for the trilogy and believe it or not, I designed the cover before I wrote the first word in the story!  All I knew was that I wanted infant twins and that was as far as I'd gotten.

Home on a sabbatical from her job as a photographer, Olivia is in no mood to play nanny or do anything remotely kind for Jake. But with guilt being thrown at her from every angle, she agrees to a temporary arrangement. The only problem? It means living under Jake's roof for the entire time.
Jake has too much on his plate to even begin to contemplate making things up to Olivia for his past mistakes but the more time he spends with her, the more he wants their arrangement to be permanent.

Can he convince her that he's sincere in his feelings and that he is looking for a woman to love and not just a live-in nanny? 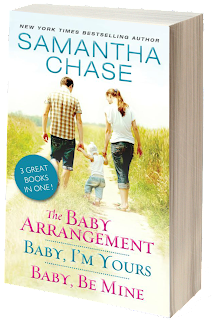 All three of these book can still be purchases in ebook format individually, but you can also get them all in one with this fabulous re-issue from Sourcebooks!  None of them had been available in paperback before so this was a real treat for me and for readers too!  Three great books in one!  And along with this beautiful new cover (only available for the all-in-one), I couldn't be happier.