Launch Day for HOW TO WED A WARRIOR

By ChristyEnglish February 02, 2016
I am so happy that today my latest novel HOW TO WED A WARRIOR is coming into the world. I loved writing about Robbie and Pru and watching these two fall in love. 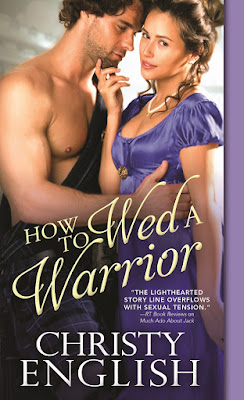 Mrs. Prudence Whittaker is a woman of many secrets...as the novel progresses, it turns out that she is living a secret life. One of her secrets that my Highlander Robbie Waters uncovers is that she is quick with a scimitar. 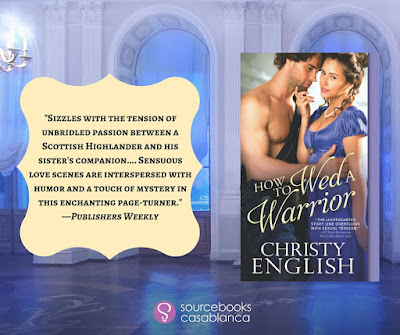 “What are you doing here?”

Robert had no more time to talk, for they were no longer alone. Some had noticed the altercation and had decided to join the fray. Three men came at him then. Robert stabbed the first one in the sword arm, and the man dropped his cutlass. Pru lifted her skirts in one hand, darting into the fight to pick up the sword, brandishing it as if she would fence with them. All three ruffians still standing started laughing, but she held her ground, covering Robert’s back.

She could not quite believe that he was making jokes while facing three adversaries. He had made short work of the first one, but there were three left, only one of them bleeding.

She decided to go along with him. “Well, I’m glad you’re here, Robbie, or I might muss my gown sorting these three out.

“I’ll muss more than your gown, little widow woman.” The shortest of the dirty men went for her before Robert could get between them. She did not falter but stabbed him in the gut. She failed to kill him, and only stabbed his side, but he fell down just the same. Robert quirked a brow at her, and she shrugged.

“I’m not fond of those that try to kill me,” she said.

As a romance reader, how do you feel about swashbuckling heroines? Do you think they're fun? Leave a comment below and let us know...

Description of HOW TO WED A WARRIOR

Reasons to quit London:
1. It's not the Highlands.
2. It will never be the Highlands.
3. It's full of the bloody English.
When his wild spitfire of a sister makes a scene by drawing a claymore in Hyde Park, Highlander Robert Waters knows something must be done. To forestall the inevitable scandal, he hires widowed Prudence Whittaker to teach his sister how to be a lady-never expecting to find unbridled passion beneath the clever Englishwoman's prim exterior.
Mrs. Whittaker is a fraud. Born Lady Prudence Farthington, daughter of the ruined earl of Lynwood, she's never even been married. In order to make her way in the world, she has to rely on her wits and a web of lies...lies a sexy Highlander is all too close to unraveling.
He swears he will possess her; she vows he will do nothing of the sort. Yet as passions heat, Prudence comes to realize the illicit pleasure that can be had in going toe-to-toe with a Scot.


Broadswords and Ballrooms:
How to Seduce a Scot
How to Wed a Warrior
How to Train Your Highlander
Ever since Christy English picked up a fake sword in stage combat class at the age of fourteen, she has lived vicariously through the sword-wielding women of her imagination. Sometimes an actor, always a storyteller, Christy works happily with Sourcebooks Casablanca to bring the knife-throwing women of her novels to life. A banker by day and a writer by night, she loves to eat chocolate, drink too many soft drinks, and walk the mountain trails of her home in western North Carolina.