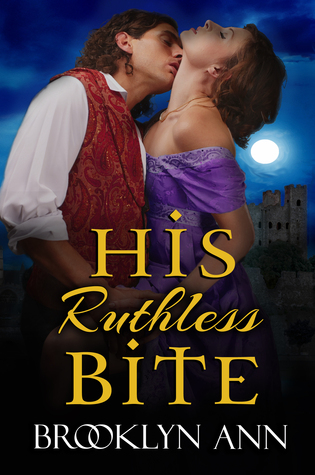 Hi everyone! Brooklyn Ann here. I just wanted to let you all know that my vampires still have fangs in Regency England!


If you've been keeping up with me, you'll have noticed that the past several months have been dedicated to my new heavy metal romance series, as well as my newest installment in my urban fantasy BRIDES OF PROPHECY series, Conjuring Destiny...which, by the way, the first book is free if you're interested in checking it out.However, all has been quiet in regards to my regency paranormal romance, "Scandals with Bite" series since last Spring when BITE AT FIRST SIGHT released.Bite at First Sight"Is this the last book?" many reviewers have commented.I am pleased to say that the answer is NO!I just finished writing His Ruthless Bite, (Scandals With Bite, Book 4)  so oh yes, you will learn what happens to Lenore and the Lord Vampire of Rochester.And here's the blurb!


The Lord Vampire of Rochester doesn’t do a favor without a price. And now it’s time to collect. Gavin Drake, Baron of Darkwood is being pestered by nosy neighbors and matchmaking mothers of the mortal nobility. To escape their scrutiny, he concludes that it’s time to take a wife. After witnessing the young vampire Lenore’s loyalty to the Lord of London, he decides she is sufficient for the role.After surviving abuse from rogue vampires, Lenore Graves wants to help other women recover from their inner wounds. She befriends mesmerist John Elliotson and uses her vampire powers to aid him with his patients. When the Lord of London declares that Lenore is the price the Lord of Rochester demands for aiding him in battle, she is terrified. Will all of her hard work be destroyed by Ruthless Rochester? Yet she can’t suppress stirrings of desire at the memory of their potent encounter.After Gavin assures her that the marriage will be in name only, Lenore reluctantly accepts Gavin’s proposal. Determined to continue her work, she invites John Elliotson to Rochester. As they help women recover from traumas, Lenore explores her own inner turmoil and examines her attraction to her husband.Gavin realizes his marriage is a mistake. His new baroness’s involvement with the mesmerist is dangerous. He knows he should put a stop to Lenore’s antics— yet her tender heart is warming his own and tempting him to make her his bride in truth.As Lenore and Gavin’s relationship blossoms, the leader of a gang of rogue vampires embarks on a quest for vengeance against Gavin… using Lenore as his key

Will book 4 be the final installment?Maybe, but I wouldn't count on it. New characters have a way of popping up and demanding a story... in fact, I think one already has, but first I need to write Book 4 in my Brides of Prophecy series.