Yesterday was release day for Heir to the Duke, the first book in my new series The Duke’s Sons. It’s always exciting when a book comes out. There’s finally a tangible thing to show for all those months of writing, editing, proofreading and promoting. This release is special, though, because it’s the beginning of a larger story cycle. I’ve spent more time with the Gresham family than with any other characters in my career. Here’s a short exerpt to give you the flavor.
As he walked along the Steine the following morning, wishing he was at Fairleigh and could take out a fishing rod or hack across country, Nathaniel noticed a shop that sold playing cards, silver loo counters, and other games, mementos of Brighton, and a general welter of small items. The cluttered display called to mind one of Sebastian’s requests, and he turned to go in. He was met by a tall, thin shopkeeper in a blue coat with brass buttons, perhaps designed to give him a nautical air. The man’s receding hairline further lengthened a long, dour face that seemed quite at odds with the frivolous nature of his merchandise. “Good day, sir,” he said. “How may I serve you?”
Nathaniel was scanning the crowded shelves. “Can you recommend any...uh...games, playthings that would fascinate a fifteen-year-old girl?”
“Fascinate?” the man repeated.
“Yes. Oh, and a thirteen-year-old girl as well.”
“Thirteen?” the shopkeeper asked. His eyebrows moved up, the corners of his lips down.
Nathaniel nodded. “Or, both together, I suppose. Yes, both together.”
“Fascinate them, both together,” the man repeated woodenly.
“That is what I said,” replied Nathaniel, wondering if the fellow was slow-witted, or perhaps a bit deaf.
The shopkeeper stared at him as if memorizing his features. “Perhaps if you told me a bit more about your...daughters...sir.”
Nathaniel frowned. Did the man imagine he was old enough to have a fifteen-year-old daughter? Technically, yes, he supposed...if he’d been markedly precocious. But what had that to do with his request? The query was impertinent. “They are not my daughters.”
“Nieces, then?”
“They are no relation to me, and I do not see what that...” Nathaniel broke off, noting that the skinny shopkeeper was positively radiating disapproval. How did he sell anything if he treated customers in this manner? And then something in the fellow’s pale blue eyes struck him. “Oh my God, man. It’s nothing like that.”
“‘That,’ sir?”
“I don’t want to ‘fascinate’ them. I don’t even know their names.”
“Indeed?”
Nathaniel would not have thought it possible, but the man’s face grew even more censorious. “It isn’t even for me,” he added. “It’s my brother.”
“Your brother?” The shopkeeper’s tone dripped with disbelief.
“Yes. Oh, not in that way!”
“What way would that be...sir?”
Torn between embarrassment, indignation, and laughter, Nathaniel threw up a hand. “Never mind.” He left the shop and walked off down the street, certain that the dismal shopkeeper’s gaze was fixed on his back. What sort of man was he, if his thoughts jumped to such conclusions from a simple request?
After several minutes, well out of the man’s sight, Nathaniel began to chuckle. How much less...varied his life would be without his brothers. He would not know what it was like to wake up under a moth-eaten wolf skin. Or how to juggle three irate debutantes, each convinced that he had engaged to take them in to supper, and ready to defend their rights with metaphorical tooth and claw. Or the best ways to navigate when you were hip deep in a pile of manure—granted that was a long time ago. Nor would he have had the pleasure of being considered a degenerate by a Brighton shopkeeper. The lengths he went to for his family!
Well, he would not attempt this particular errand again, that was certain. Perhaps Violet could suggest something. That was it. She had, after all, been a fifteen-year-old girl, and a thirteen-year-old, come to that. He would ask her for advice and get her to purchase the—whatever it was—herself. 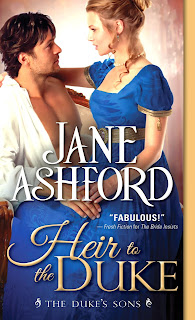 Life is predictable for a Duke's first son
As eldest son of the Duke of Langford, Nathaniel Gresham sees his arranged marriage to Lady Violet Devere as just another obligation to fulfill – highly suitable, if unexciting. But as Violet sets out to transform herself from dowdy wallflower to dazzling young duchess-to-be, proper Nathaniel decides to prove he's a match for his new bride's vivacity and daring.
Or so he once thought...
Oppressed by her family all her life, Lady Violet can't wait to enjoy the freedom of being a married woman. But then Violet learns her family's sordid secret, and she's faced with an impossible choice – does she tell Nathaniel and risk losing him, or does she hide it and live a lie?