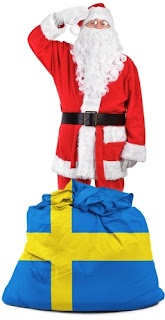 My nephew declared over the phone that he thinks Jultomten—Santa Claus—may be fake. I can tell he's fishing for confirmation, so I only offered nonverbal responses in a neutral tone during our conversation. His main reason for suspecting that something fishy is going on is that his dad often has a last minute errand and leaves the house right before Jultomten shows up and then miss the whole visit. My brother—my nephew’s dad—mixes it up some years and trades duties of impersonating Santa with a neighbor or his brother in law. It’s hard for parents in Sweden to keep the myth of Santa alive, because the children there expect Jultomten to shop up in person on the evening of December 24th and hand out gifts from his big sack. He knocks hard on the door, usually three knocks, and asks in a boisterous voice if there are any nice children in the house. The confident kids shout yes. The rest look to their parents for confirmation that they’ve behaved well enough through the year to be given presents and then nod. Usually the expectation and tension is too much for at least one of the little ones and there are tears, but then when the presents are given out all is well again. 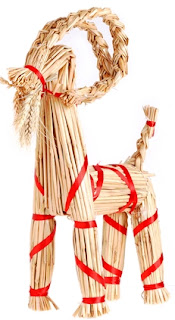 I first suspected Jultomten may actually be an impersonator the year we had a very tall and skinny Santa who just happened to wear the same clogs as my babysitter—a tall and skinny girl whose footwear I always envied. I also noticed that the Julabocken made of straw that Santa carried under his arm looked just like the one from my babysitter’s mom’s foyer. The Yule Goat is an old Christmas tradition believed to date back to pagan days. It may be a symbol of Thor, who has a carriage drawn by two goats. In Sweden, it’s always been a symbol of an invisible spirit checking to make sure the Yule preparations were done correctly. Before we adopted the tradition of Santa Claus, it was the Julabocken who distributed gifts—which is probably why the two appear together in modern times.

The suspicion the Jultomte was fake lingered with me for a year or two. My parents selected more portly Santas to divert my attention from my main suspect: the babysitter. I almost believed their stories of the jolly man having had a lean year but was then off his diet again. And then my illusion was completely shattered the year I charged into the kitchen to show my mom an unwrapped gift and caught her and Santa having a Jul snapps, a Christmas schnapps. The red Santa suit was right, but the face was all wrong. My neighbor had pushed the mask on top of his head so he could drink the shot. I don’t remember what the gift was that I wanted to show my mom, but I do remember how betrayed I felt that Jultomten was just another one of those things grownups used to trick kids into cleaning their rooms.

I know my nephew will one day experience that same feeling of betrayal, but he’s still young enough to believe that Jultomten could possibly be real. And I want him to have that magical feeling about Christmas for at least a few more years. When he does finally find out that it’s all a hoax, I hope he blames only his parents and keep thinking I’m the cool aunt who’s more fun than the other grownups. :-)

If you celebrate Christmas, what are your memories of Santa Claus? Do you remember how you felt when you found out he wasn’t quite as magical as you had been lead to believe?

Asa Maria Bradley grew up in Sweden surrounded by archaeology and history steeped in Norse mythology, which inspired the immortal Vikings and Valkyries in her paranormal romances. She also writes romantic suspense and currently resides on a lake deep in the pine forests of the Pacific Northwest with a British husband and a rescue dog of indeterminate breed. Sourcebooks bought her 2014 Golden Heart nominated manuscript in a three-book deal. The first book in the series, VIKING WARRIOR RISING, is now available from your favorite bookseller and these fine online retailers: