Some years ago, I came across a treasure trove—four Baedeker guides from 1887. Maybe that isn’t everyone’s idea of a treasure, but it certainly is mine.

I don’t think it was those guidebooks that gave me the idea to have my Victorian characters go off traveling for their adventures, but they did remind me that guidebooks are a wonderful source for research. You can find out how people got from place to place, where they might stay, what they would see.

Guide books also tell you something about the people who were traveling too. People have always moved around the globe, but generally for a reason. Wealthy gentlemen in the 17th and 18th centuries might go on the Grand Tour to round out their education, and starting in the 18th century people like Lizzie Bennett and the Gardiners might go touring—with a guidebook to tell them which houses were worth looking at.

As an aside, I’ve always thought it must be rather fun to be a nobleman who could go up to a house belonging to total strangers, hand in your card, and expect to be invited to stay the night. For other people, it took a certain level of wealth and leisure to be able to travel, and that doesn’t really happen until the 19th century.

There’s a guide book from 1770, The Gentleman’s Guide in the Tour Through France wrote by an officer.  According to its subtitle, its purpose is to urge travelers “Not to spend more Money in the Country of our natural Enemy, than is requisite to support, with Decency, the Character of an Englishman.”

Sure enough, the directions on how to get from place to place, what to see when you get there, and how to arrange for meals and a place to stay are all interspersed with warnings on how to avoid being cheated.

The Napoleonic Wars made travel around Europe a bit difficult, but once Waterloo settled that problem, people were on the move. If you couldn’t find any other reason to travel, you could always do it for your health. In 1820, Mariana Starke wrote Travels in Europe for the use of Travellers on the Continent. It went through numerous editions, and was frequently plagiarized. By the 1839 edition, she was noting that both roads and accommodations had greatly improved, but still the “least fatiguing” way to travel, and the best for invalids, was to go by sea, or by sea and canal.

These handbooks are full of practical information, and most of them are available on the Internet. I used them to figure out just precisely how Lady Emily and her family got from London to Rome and how long it would take them. I didn’t put it all in the book, of course, but I needed to know.

Aside from the useful stuff, something I find truly interesting about these guidebooks is the wealth of historical and artistic information they contain, and the total absence of information about shopping and entertainment. One of the ones I have, the 1887 guide to Southern Italy, has six pages of small type devoted to the history, architecture and decoration of Pompeii, followed by another eighteen pages guiding you through all the buildings that had been excavated so far. The original owner of the book was there in January 1890—he penciled the date in the margin—and checked off almost every building.

They were serious travelers those Victorians.


For more information on how Victorians traveled, check out my new release Lady Elinor's Wicked Adventures! 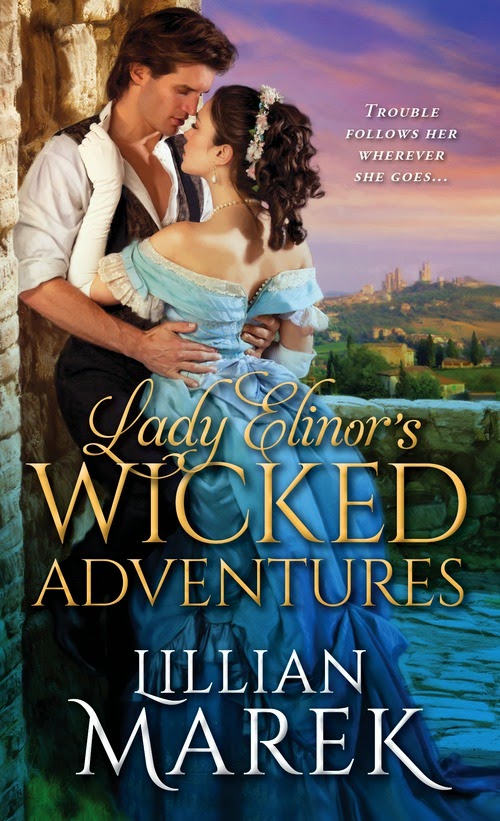 Harry de Vaux, Viscount Tunbury, has loved Lady Elinor Tremaine for as long as he can remember—but is convinced that his past makes him unworthy of her. He agrees to accompany the Tremaine family to Italy to explore Etruscan ruins, even if it chips away at his resolve to stay away from the delightful woman he loves.

The intrepid Lady Elinor is caught up in the Victorian fervor for exploring distant lands. But during her travels she is thrown back into the company of an old friend, Harry de Vaux. Amid the sightseeing and treasure hunting, Elinor comes to realize that she wants far more from Harry than friendship. But when a dangerous discovery leaves them fighting for their lives, it might just be too late...

Lillian Marek was born and raised in New York City (the center of the universe). At one time or another she has had most of the interesting but underpaid jobs available to English majors. After a few too many years in journalism, she decided she prefers fiction, where the good guys win and the bad guys get what they deserve.