New Release: To Love and to Cherish by Leigh Greenwood

When I was deciding what I wanted to do with my life, I never thought of a career as a writer.  When I was in high school it was either medicine or chemistry.  After deciding that neither was really what I wanted to do, I settled on a career in vocal music.  That meant I would be an organist/choir director, or I would teach music lectures and direct choirs in high school.  For thirty-two years I did one or the other.  The only writing I did was papers required by my teachers.  I was a good writer with excellent grammar, but I was handicapped by being a bad speller.  I usually got an “A” on content and a “C” on grammar because of misspelled words.  They didn’t have spellcheck back in the 50s and 60s
The first creative writing I did was in response to an urge to write about my experience of becoming a first-time father.  All of my previous writing had been based on research.  All I had to do was gather the information, organize it, then lay it out.  This was different.  Sure, there was the sequence of events that led up to the birth of my daughter and the year to her first birthday, but it wasn’t the same as a research paper.  There were no facts to organize, no conclusion to be reached.  Basically I had to write about how I felt about what was happening.  I’d never done that before, and it was hard.  I worked on it during the summer.  I’d spend hours and come up with less than two pages.  I struggled through about twenty-four episodes before school started again
The next summer I worked on it again and it got a lot better.  I’d never thought of writing for publication, but I decided to send out a few chapters to see what would happen.  Basically I was told nobody would be interested unless I was a pediatrician or a famous celebrity (think Bill Cosby).  I worked on it a bit more and put it aside for my daughter to read when she was grown.
However, the writing bug had gotten a hold on me, and I couldn’t stop.  I started writing short, humorous accounts of various things that happened to me.  I enrolled in a writing course by mail.  The teacher told me I shouldn’t try to be funny in every sentence.  I guess he’d never read Rally Around the Flag, Boys, Please Don’t Eat the Daisies, or anything by Erma Bombeck.
About that time (around 1980) I heard that you could make decent money writing romances.  I tried to get my wife to write a historical romance because that’s what she read, she was staying at home with the children, and I made very little money as a teacher in a private school.  She challenged me to write one.  She’d started me reading historical romances several years earlier.  I loved the genre so I decided to give it a try.  The first book I wrote was turned down, but by now I was truly hooked. I wrote a second book that was also turned down.  Then, low and behold, my third was accepted.  When I sold a second book, I quit teaching, got a job as organist-choir director, and started to write fulltime.  My wife was sure we’d starve, but I managed to turn a dare into a writing career of more than fifty books. My latest book, To Love and to Cherish, is out now! 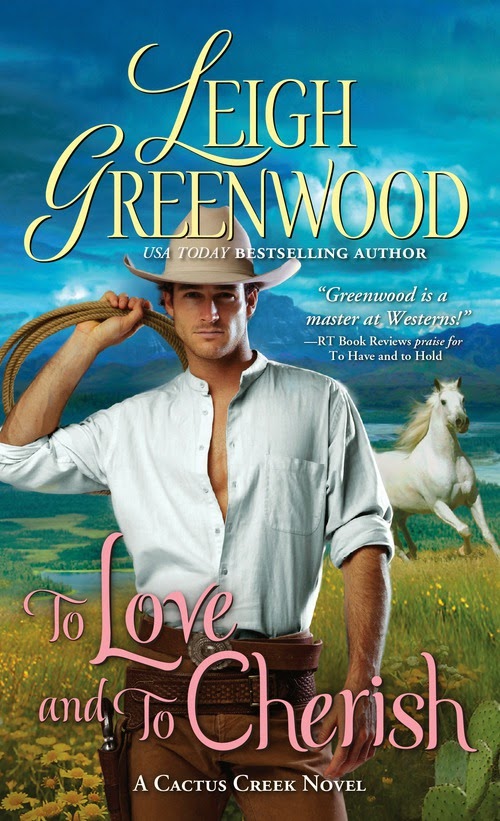 Torn Between a Desire to be Free…

When Laurie Spencer said “I do”, she never realized she’d be trading one pair of shackles for another—until her husband’s unexpected death leaves her with an opportunity to escape her controlling family for good. Determined to be independent, Laurie approaches sexy rancher Jared Smith with an offer she hopes he can’t refuse…

Jared’s determined to make it in Texas, but with the local banker turned against him, it looks like his dream may be slipping through his fingers. When unconsciously sensual Laurie offers a partnership, his luck may be changing…but when she throws herself in as part of the deal, Jared’s not sure he’ll be able to respect the terms of their agreement and keep his eyes—and his hands—to himself.

There’s something about Laurie that awakens every protective instinct Jared has…and when all hell breaks loose, there’s nothing and no one who’ll be able to keep this cowboy from her side.

Leigh Greenwood is the USA Today bestselling author of the popular Seven Brides, Cowboys, and Night Riders series. The proud father of three grown children, Leigh resides in Charlotte, North Carolina. He never intended to be a writer, but he found it hard to ignore the people in his head, and the only way to get them out was to write. Visit him at www.leigh-greenwood.com.