If you’re old enough, cast your mind aaaaallll the way back to the 80’s, when cable came in one variety: basic. We made do with a handful of channels and considered ourselves lucky. My children wonder how I lived through such depravation—no streaming, no interwebz, no cell phones. Somehow, I struggled through and made it all the way to adulthood before texting. Oh, the tragedy of it all.
Anyhoodles, back in the day, local stations didn’t carry seventeen late night talk shows and were forced to get creative and develop their own programs. Hence the boom of the late night horror fest, with dozens of Elvira knockoffs who introduced scary movies to the kiddos and a few adults who had nothing better to do.
In our market, we had Friday Fright Night, and during my tween years, watching a trio of schlocky movies became a ritual. So every Friday, after the local news, I’d be huddled up with my friends, and with the lights off, we’d watch horrible horror movies that would send delicious shivers of terror up my spine. But I knew all would be well, because after a particularly frightening scene, car commercials broke up the tension and gave us the opportunity to grab handfuls of popcorn and talk about boys. 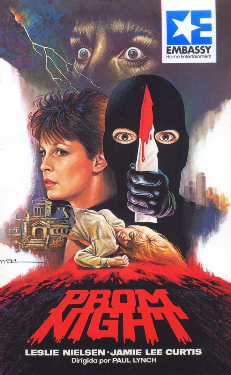 The movies weren’t very scary, not really. I’ve rewatched some of them as an adult, and boy, are they stinkers. But these cheesetastic favorites take on the warm glow of nostalgia, because I watched them with my childhood pals. So I’m going to give a few that I remember fondly.
Prom Night—the original from 1980. Before Jamie Lee Curtis became the yogurt lady whose concern about our intestinal health got a little obsessive, she was a scream queen. After Halloween, she put out a few more slasher flicks, including this one. Everything about this movie—from the tedious, drawn out flashback at the beginning to the incomparable Leslie Nielsen, in an ironically serious role as high school principal/Jamie Lee’s dad—bears all the hallmarks of a teen slayfest. Kids getting killed while having unprotected sex in the back of a van? Of course! Bizarre weapons used on mean girls wearing prom dresses? Like, duh. But…this movie has the added bonus of Leslie Nielsen disco dancing. Yeah, you read that right. Leslie, performs some seriously smooth moves with Jamie Lee on the lighted dance floor. You’re not going to find that type of entertainment just anywhere. 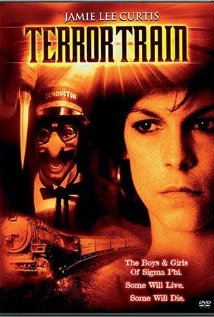 And speaking of Jamie Lee, we have Terror Train—1980. On board a party train, a sadistic killer is picking off teens, one by one, to right a wrong no else remembers. Isn’t that always the way with these sadistic slashers, always exacting overly complicated revenge? This plot is almost identical to the above mentioned Prom Night. But sadly, no disco dancing. And the teens here are in college, not high school. However, where else are you going to find David Copperfield—yes, that David Copperfield—in riveting role as a magician? Um…

Moving on, we have Satan’s School for Girls—1974. This was originally a made for TV movie directed by Aaron Spelling. Bonus feature: it stars Kate Jackson and Cheryl Ladd. Yes, before they were Charlie’s Angels, they were Satan’s schoolgirls. This movie is bad. I mean bad, bad. Our heroine’s sister is found dead, so even though she’s like, thirty-six, she enrolls in Salem Academy for Women to find out the truth. Our girl should have known something was up when she was issued a gas lamp because the lights often went kaputz for no apparent reason, and, oh yeah, no one wants to talk about all the dead girls piling up like chicken bones at a picnic. On the plus side, we get manly eye candy in the form of a groovy art teacher who says profound things like, “You have to let your mind hang loose.” Word, Professor Good Hair. 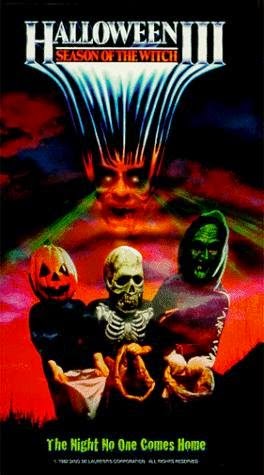 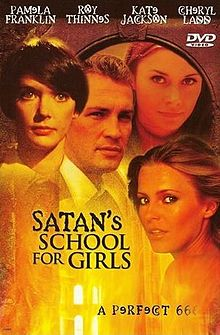 And finally, no awful horror movie list would be complete without Halloween III: Season of the Witch—1982. What makes this movie so bad, you ask? Aren’t the Halloween movies, featuring the recurring hockey-masked Michael Myers, a classic franchise? Yes, I answer, they are. But this movie isn’t connected to the Halloween movies in any way, other than the title. You see, some old dude is making masks and he advertises them incessantly, accompanied by a highly irritating, electronic song counting down the days until Halloween. And some dad figures out the old dude is shady. So he decides, like all good dads would, to head to the parent company and ask a few questions. ??? Along for the ride, is a woman he wants to schtup. ??? But after the schtupping and sleuthing, our duo are taken prisoner by the old dude—Oh Noes!—and have to stop the clock before the chip embedded into all the evil masks makes the kids’ heads turn to mush. Not sure why the old dude is going to all this trouble. All he needs to do is wait a few years for the video game boom, and then their little brains will be mushy in no time. But I digress. So, the dad gets free and saves most of the kids. Whew! What a close call. This movie is laughably bad. Therefore, I bought the DVD and watch it every Halloween.
And so ends my list…for this year. But I’ll be back. Mwhahahaha. No seriously, if you get the chance to watch any of these movies, you have way too much time on your hands. But they are worth a chuckle.
So, do you have any awful horror movie memories? I’d love to hear all about it!