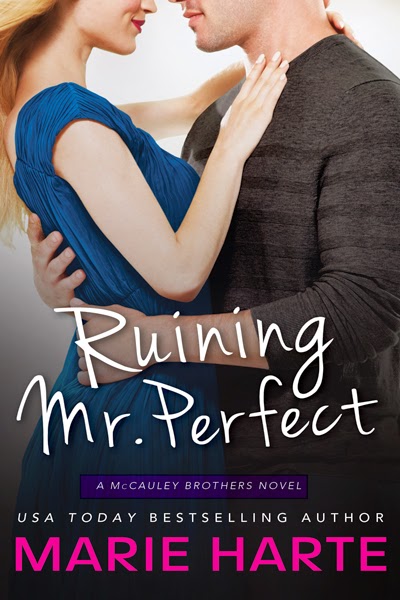 I'm the oldest of two children. I have two children myself. So in both cases, there is no middle child.
With the McCauley Brothers series, there are four heroes who do their level best to confuse the women they're falling in love with.

Ruining Mr. Perfect is Cameron's story. Cam is the youngest McCauley, but I think of him as my series middle child. His book is the third in the series. We've already met his charming brother, his wounded playboy of a brother, and we'll meet his oldest brother, the responsible one, in book four. So what is Cam to do but be himself, that square peg trying to fit in a sea of round holes?

Cameron is the white collar worker in a family of blue collar stiffs. He prefers the finer things in life to roughing it, and he's not nearly as wounded as his siblings. He's got his head on straight, for the most part. Yet he was probably my most challenging character of all four brothers to write.

He isn't afraid of commitment. He doesn't have a scarred past to handle. No major loss, no major responsibilities to anyone but himself. He loves his family and they love him. So where the heck is his conflict? What makes him interesting to read about?

I worried about that for a while, but then I realized his problems are much closer to home. Family makes Cam's life miserable for a while, which is just where he needs to be to grow. Nothing worse than a perfect character who's perfectly happy. Cam...is not. And then there's his unrequited--or it is?--crush?

No, I didn't have to work hard to ruin Mr. Perfect. I merely introduced him to Vanessa!

IT’S NOT EASY BEING RIGHT
Vanessa Campbell is a CPA by day and a perfectionist by night. She’s fit, successful…and decidedly lonely. She can’t stop thinking about the youngest McCauley brother, Cameron. He’s just like her: smart, attractive, and usually right-except when dealing with her.

…BUT SOMEONE’S GOT TO DO IT
Cameron McCauley likes Vanessa a little too well. She’s a blond goddess with a razor-sharp tongue. She hates to be wrong, just like him. But she can hold a grudge and is stubborn to a fault-also like him.

A past misunderstanding has them rubbing each other the wrong way. Cam is dying to shake Vanessa up-get her to let loose. But if he succeeds, can his heart handle it?