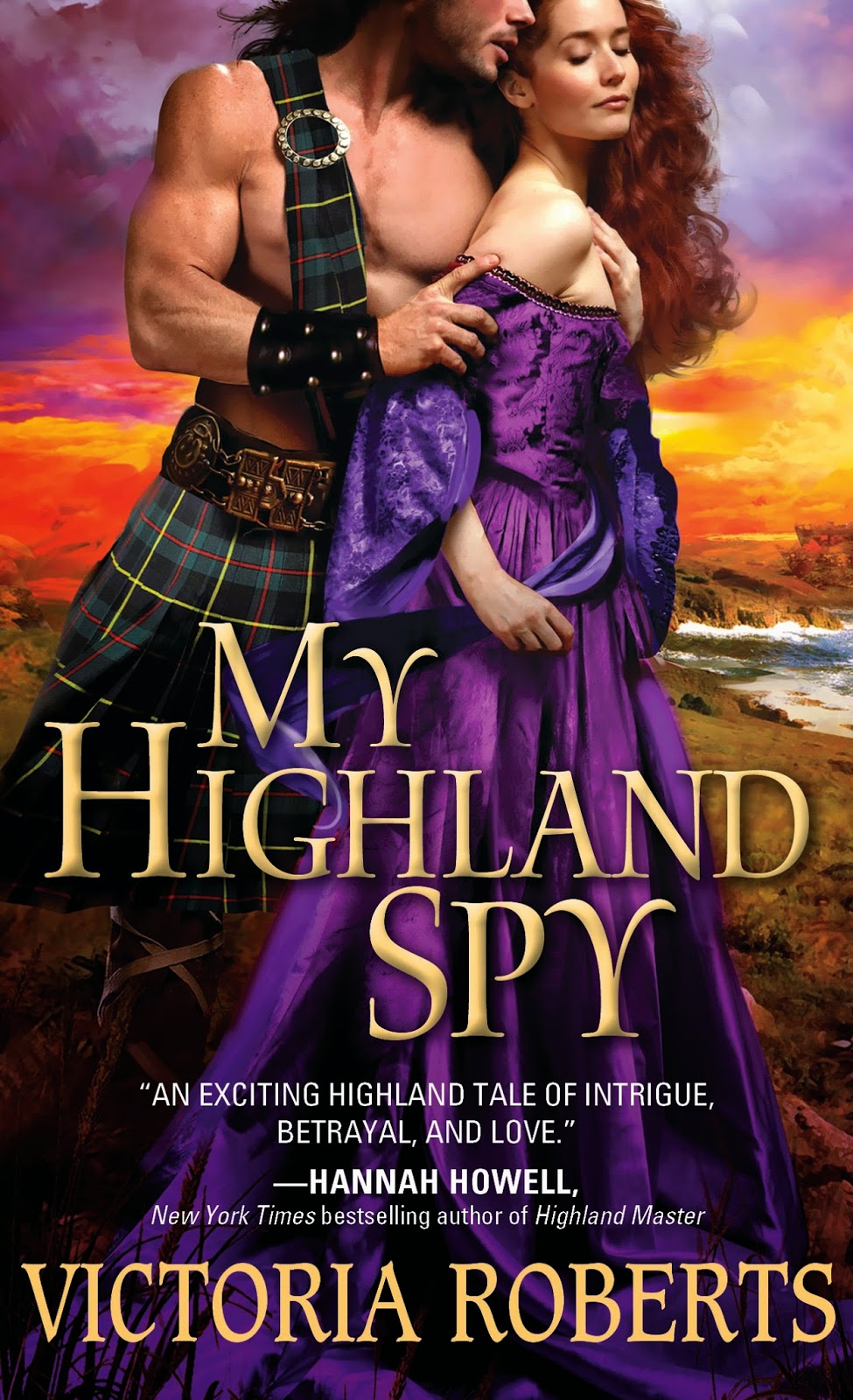 I'm here to celebrate the first book in my new Highland Spies series, My Highland Spy.

Laird Ruairi Sutherland and Lady Ravenna Walsingham were so much fun to write. The Highland Spies series is based around four English sisters and their escapades in the Scottish Highlands. The eldest sister, Ravenna, is a spy for the Crown and her sisters don't know of her extracurricular activities.

When Ravenna learns her next assignment is in the Scottish Highlands, she's far from pleased. She's spied on men who’ve conspired against the realm, uncovered a wealthy lord’s machinations in selling secrets to the French, discovered a traitor before he made his escape to the colonies, and now she's asked to masquerade as a governess for some Highland laird’s child.

Ruairi is not thrilled to have an Englishwoman show up on his doorstep. The last he needs is the English under his roof teaching his son not to be Scottish. Here's a fun excerpt where Ruairi and Ravenna meet for the first time.

“Aye, well ’tis too late to turn her away now, Ruairi. What did ye expect? How long did ye think ye’d be able to hold King James at bay? Ye havenae shown your face in Edinburgh and didnae send Torquil—”

Laird Ruairi Sutherland thundered his way to the great hall and didn’t even wait for the captain of his guard to finish his comment. Why would he? Fagan clearly knew how Ruairi felt about the Crown. As if he would send his only son to the Lowlands to learn the King’s English. King James had no respect for Scotland or its people. And Ruairi would be damned if he’d give in without a fight.

He entered the great hall and walked toward the English lass. Her brown hair was pulled back into a tight, unflattering bun. Her face was austere, her manner haughty. The woman acted as if she graced him with her presence. He didn’t like her at all.

“A bheil Gàidhlig agad?” Do you speak Gaelic?

The woman merely stood there mute.

He looked at Fagan and smirked. Turning back toward the woman, Ruairi’s eyes darkened. “Thalla dachaigh.” Go home.

“Just place the trunk right there. Thank you.”

Ruairi’s eyes widened in surprise as another woman entered the great hall. Her smooth ivory skin glowed. She had a wealth of red hair in loose tendrils that softened her face, and her lips were full and rounded over even teeth. She was elegant and graceful. He wasn’t sure what an English governess was supposed to look like, but she wasn’t what he’d expected.

She wore a blue traveling dress with tight sleeves and a low-pointed waist that clung to her slender body. And for the first time since he could remember, he had no words to express the sight before him. The woman was simply beautiful. She lifted her skirts and walked over to him, greeting him with a warm smile.

“I see you’ve met my driver’s wife, Mary. You must be Laird Sutherland. It is a pleasure to make your acquaintance. I am Mistress Denny.”

Carried away by his own response, Ruairi failed to notice that the woman waited for him to answer. He also had one hell of a time trying to suppress his admiration. When her cheeks reddened under the heat of his gaze, he cleared his throat and nodded at Fagan.

“’Tis a pleasure to meet ye. I am Fagan, the captain of Laird Sutherland’s guard.” The lass looked puzzled, and then Fagan added, “My laird doesnae speak English.”

Her eyes widened and her jaw dropped. “I see. And what of Lady Sutherland?”

Ruairi eventually came to his senses when the pounding of his heart finally quieted. Although the woman was pleasing to the eye, she could keep her English ways to herself, as far as he was concerned. He was determined not to make this easy for her—as if he would roll over like a good dog because his liege demanded obedience. As soon as King James gave the Highland lairds the respect they deserved, perhaps he would feel differently. But for now, Ruairi certainly wasn’t going to tell the lass that he understood every word she spoke. 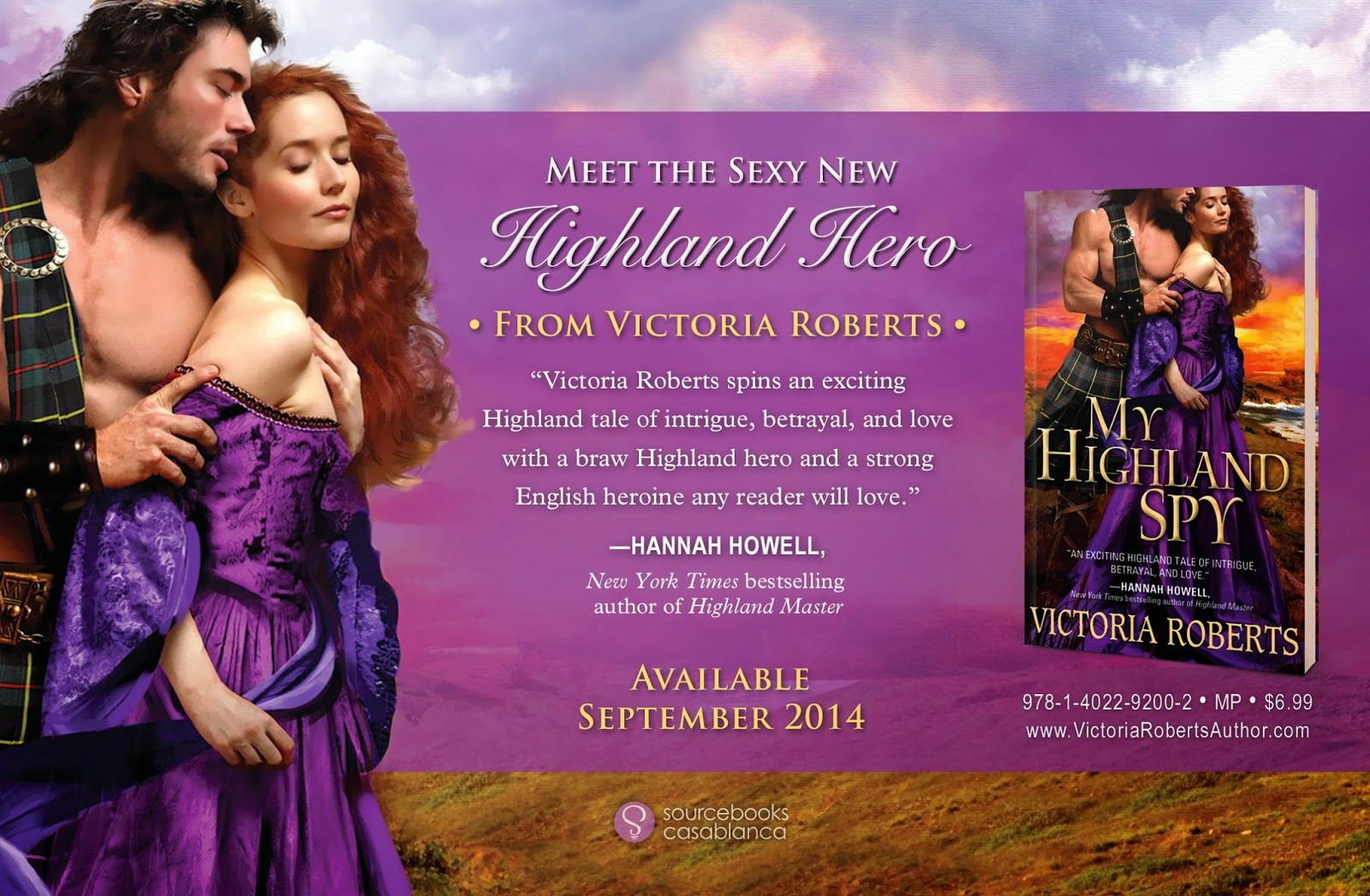 “Roberts’ newest features a surprise-laden, quick-paced plot, replete with unconventional and fiercely independent characters. Her lyrical prose grabs readers’ attention, and the high level of emotional tension simply adds to the depth of the story. This book begs to be read and reread.”

GIVEAWAY: Win an autographed copy of My Highland Spy, a Highland Spies' t-shirt, an autographed postcard and bookmarks (US and Canada only, please.) Leave a comment and tell me your favorite spy movie. Winner will be drawn Wednesday, September 10th.