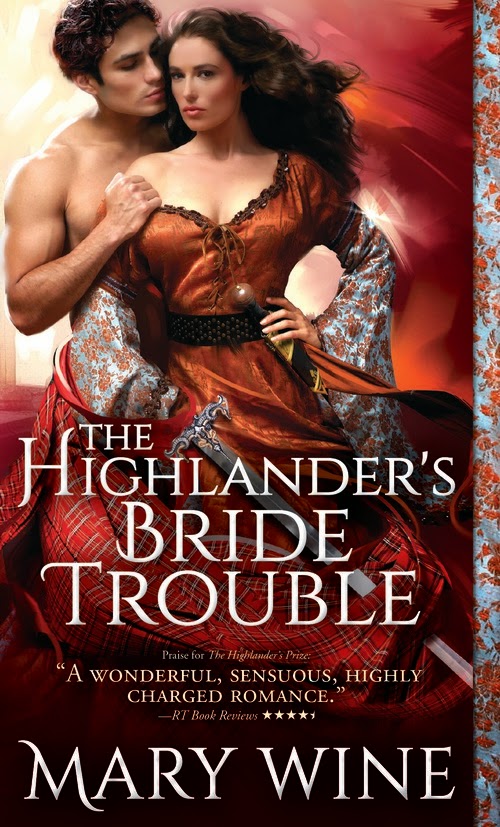 So how does it feel to be at the end of the saga?

The Highlander’s Bride Trouble is book four in my Sutherlands series. This is the surprise book. The one that wasn’t contracted or outlined two years ago when I first started off pitching ‘The Highlander’s Prize.’

Okay, to be honest, ‘The Highlander’s Prize’ wasn’t even the book I was supposed to be writing. I had started another book, that is collecting dust on my hard drive at the moment, when ‘The Highlander’s Prize’ came to mind. It was vivid. Frustratingly so, because I’d sold my wonderful editor Deb another book. The amazing marketing team at Sourcebooks was working on that book when I called up and said…’What about this instead?”

Deb put her faith in me. The book that came out of that was the first in this saga. Maybe it’s perfect timing to have this final piece releasing in August. That last month of summer. I know I’m looking at that calendar and thinking…Where did the season go? Is it really time to start thinking of back to school and holidays?

But I’ve got nothing to complain about when I think of the times I write about. Harvest time was a busy time. It was also a critical part of survival. A poor harvest meant suffering and possibly death during the longs months of winter. The people of these time struggled to preserve everything they could so that they would make it to the spring. Anyone who planted a garden this year knows, right about now, you’ve got more tomatoes and zucchini than you have any idea what to do with. Lol. I recall helping my grandmother jar and can during the early fall months. I still love homemade apple butter.

Whatever your plans for the end of summer are, I hope you enjoy this last book in the Sutherlands. I wanted to write this one half way through How to Handle a Highlander because Nareen and Saer collided with such a shower of sparks.

So, what is my next book release after ‘the Highlanders Bride Trouble?’ Hop over to my website at MaryWine.com to find out!

An Excerpt:
He reached out and stroked her cheek. “’Tis a sad thing to see how hard yer feelings are. But there is naught more to fear, she’ll nae have the opportunity to inflict such ills again.”

Nareen jerked away from the contact. She even took a swipe at his hand, but he moved faster, withdrawing in time to avoid being struck. Someone chuckled from where his men clustered near the fires, but Saer was watching her from narrowed eyes.


“I am nae afraid of anything,” she assured him.

“Is that so?” Saer inquired in a silky-smooth tone.

Nareen nodded. Satisfaction began to fill her, but it was cut short as he reached out and stroked her face again. She jumped, completely unable to control her reaction.

“Ye are making sport of me in front of yer men, like a savage.”

His eyes glittered, but it wasn’t with the outrage Nareen had intended to provoke. Instead, there was an unmistakable pleased looked in those dark orbs.

“I am a savage, Nareen.” He stepped forward, placing himself within touching range again. “I do nae let words stand alone. If ye truly have no interest in me, there is no reason to avoid me touch. Stand steady and prove ye are nae moved. I have no taste for a frigid woman.”

She laughed at him but stepped back again. “Then it seems we have a common ground, for I crave no man’s touch.”

His lips thinned. “Now that is something ye shall have to prove as well.”

“I will nae. Me word should be enough on the matter, if ye truly are me brother’s friend.” She didn’t care to hide behind her brother’s name, but the circumstances offered her few alternatives.

“As ye noted, I am a savage, and I always demand proof before I believe.”

This time, she was ready when he reached for her cheek. She stepped aside, avoiding him. She was just beginning to smile with her victory when he closed his hand around her wrist. He really was huge. His fingers closed easily around her smaller wrist, clasping it in an iron grip. She braced herself for pain, but there was none, only a secure hold that defied her attempt to break it.

“Release me.” Her voice had risen, and she shut her mouth before revealing any more of her unsettled state.

“Prove ye are unmoved, lass, and I shall be content to accept yer dismissal.” His tone had deepened, becoming something hypnotic.

“I am irritated.” And remaining still was proving too difficult. She twisted her hand, trying to break his hold again.

“Aye, ye are that.” He lifted her hand to his face and pressed a kiss on the delicate skin of her inner wrist. She shuddered, the touch intensely intimate. She’d never realized her skin might be so sensitive. The simple touch of his lips unleashed a bolt of sensation that shook her all the way down to her toes. His eyes filled with satisfaction.

“But ye are also affected.”

He released her, and she stumbled back a pace because she’d been resisting his hold so greatly. Laughter erupted from his men. Saer stiffened, and he crossed his arms over his chest.

“What?” she said. “Are ye trying to impress me by controlling yerself now that ye see yer men are enjoying the sport ye are making of me?”

“Aye, I am,” he answered darkly. “I am nae the one who chose this setting for our meeting, Nareen. Ye should nae have refused to see me again at court. That left me no choice but to chase ye.”