New Release Excerpt: The Truth About Leo by Katie MacAlister 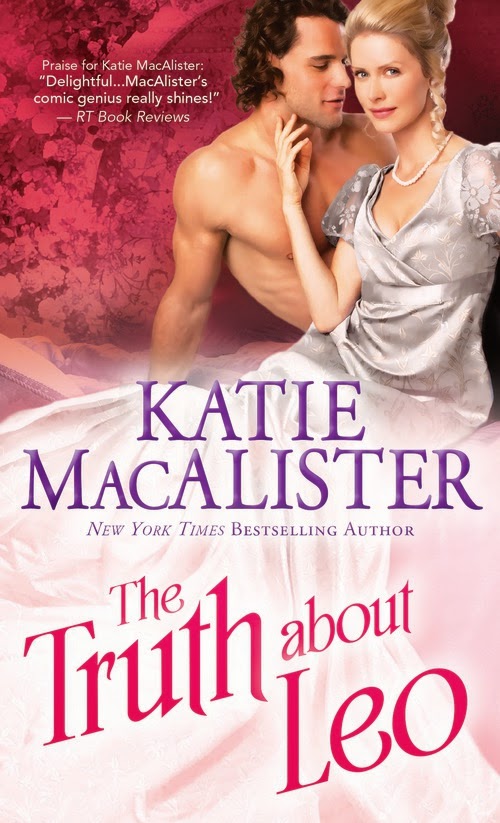 Dagmar Marie Sophie is a poverty-stricken Danish princess whose annoying royal cousin is about to have her stuffed away in a convent. When she finds a wounded man unconscious in her garden, she sees a way out of her desperate situation.

By Lying to Leo?

Leopold Ernst George Mortimer, seventh earl of March, and spy in the service of the king, finds himself on the wrong end of a saber and left for dead. He wakes up not remembering what happened...in the care of a beautiful woman who says she is his wife.

Back in London, Leo-with the help of his old friends the eccentric Britton family-sets out to unravel what he's forgotten... Is Dagmar truly the wonderful, irrepressible woman who makes his heart sing, or is she a dangerous enigma bent on his destruction?

About the Author
After writing several boring software books, Katie MacAlister switched to fiction, where she could torment her characters, indulge her penchant for witty dialogue, and fall madly in love with her heroes. The Truth About Leo is a brand new romance continuing the series of delightful Regencies that launched her career. A regular on the New York Times, USA Today, and Publishers Weekly bestsellers lists, Katie MacAlister has written thirty novels, including unforgettable paranormal, historical, and contemporary romances, which have been translated into numerous languages. She lives in the Pacific Northwest. Visit katiemacalister.com to learn more about the author.

Leo stared at Dagmar. “What, never?”

“Oh, I’ve been kissed. Mama and Papa were very affectionate, and men have kissed my hand, of course. But there is a difference between a man like Frederick slobbering on my knuckles, and a man like you, with all your muscles and your warm flesh, and your hair that I want to touch, kissing me. That I would very much like to experience, and I see no reason why you couldn’t do that now.”

“Far be it from me to deny a lady a simple request,” he said, looking somewhat noble. Dagmar wanted to giggle. “But immediately following the kiss, we are going to talk. What are you doing?”

“Giggling,” she said, making an effort to stop. “You look like a brave knight about to face a dragon.”

“Well, stop it. No man wishes to kiss someone who giggles. And I assure you, madam,” he said, putting his good arm around her, easing her forward until she leaned on one side of his chest, “I find the princess a much more daunting foe than dragon. Tilt your head slightly. Other way. No, there’s no need to open your mouth up wide. I’m not going to extract a tooth. There, just like that, with your lips slightly parted.”

Dagmar’s eyes crossed when she tried to keep him in focus when his mouth descended upon hers. At first, she wasn’t overly impressed with the experience, and she told Leo so.

“For one,” he said, pulling away enough that she could see him again. “You’re not suppose to speak while I’m kissing you. And for another, we hadn’t really started. That was just a little preliminary peck, if you will.”

“It was just your lips touching mine in no real exciting manner. To be honest, I found it very underwhelming,” she said, frowning slightly at him. What if all the romantic tales she’d read of heroines who swooned upon kissing the hero were fabrication of deranged minds? What if this kissing business was a warning that the bedding was going to be just as disappointing? What if—

At that moment Leo swooped in again, and this time, it was as if an entirely different person was kissing her. Leo didn’t just kiss her; he took possession of her mouth, his lips apparently taking charge of hers while his tongue swooped and swirled and teased with wet little touches that by rights should have been disgusting—she hadn’t imagined a tongue ever entering into the situation—but in reality, seemed to start a fire deep inside her that quickly spread outward.
***
Available Now:
Amazon: http://amzn.to/1tzBxPE
Barnes and Noble: http://bit.ly/1mF51eE
BAM: http://bit.ly/XNBDsF
Chapters: http://bit.ly/1A0GZhV
Indiebound: http://bit.ly/1lIeFZg
iTunes: http://bit.ly/UnGMWl
Kobo: http://bit.ly/1oqQ14b