Historical Romance Writer Confessions: What It's REALLY Like to Write with a Quill Pen

By Unknown August 29, 2014
In many historical romances, there's a point at which characters write. We all know the drill: ink, paper, quill, sand. The process of writing usually isn't as significant as what's written.

But what if it were? Based on my experience using a metal calligraphy pen (since I'm left-handed, it went about this well), I wrote the following passage in my first Matchmaker romance, IT TAKES TWO TO TANGLE. In this scene, the hero, Henry, is attempting to write left-handed after an injury to his right arm.


He sat at the desk, and with his left hand, he wrenched open the inkwell. Ink spattered onto the painted wood of the desk and speckled his hand.

“Damn it,” he muttered. This blunder slightly damped the pleasure of answering Caro’s letter. Ink was the devil to clean up.

He dipped a quill that felt shaped wrongly against the curve of his hand. His unpracticed fingers shivered once the pen took on its load of ink, and black blobbed onto the page.

No matter. He was just writing a short note; he could cut off the damaged section of the paper. But his fingers slipped, dropping more spatters of ink, and filling the D he’d tried to write—just Dear, that was all—in a misshapen circle. And he’d gotten ink on his shirtsleeve too.

He glared at the paper for a moment, as if the force of his gaze would move the particles of ink where they ought to belong. But the few letters he’d scrawled stayed stubbornly malformed, impossibly childish. Illegible, really. And his sleeve was still ruined.

He scratched away determinedly for half an hour, shaping letters until he had managed to write “Dear Caro” in handwriting at least as good as that of a five-year-old child. It took seven full sheets of writing paper, and his cuffs were completely ruined.

Of course, they were really Jem’s cuffs, as he had borrowed this shirt from his brother.

The thought cheered him at once.

Writing left-handed with a quill pen--basically a sharpened feather--is even more challenging than writing with a modern metal calligraphy pen. Or so I figured, though I didn't have the chance to test it.

Until now. Because a friend of mine (you know who you are) gave me a quill pen and ink set. I knew I was in trouble right away, because I had to mix the ink myself from a powder and hot water. This is much simpler than the way ink was made 200 years ago, but even so, I got it EVERYWHERE. This picture shows the end result, after much cleanup. Not too bad. The color was nice and dark. 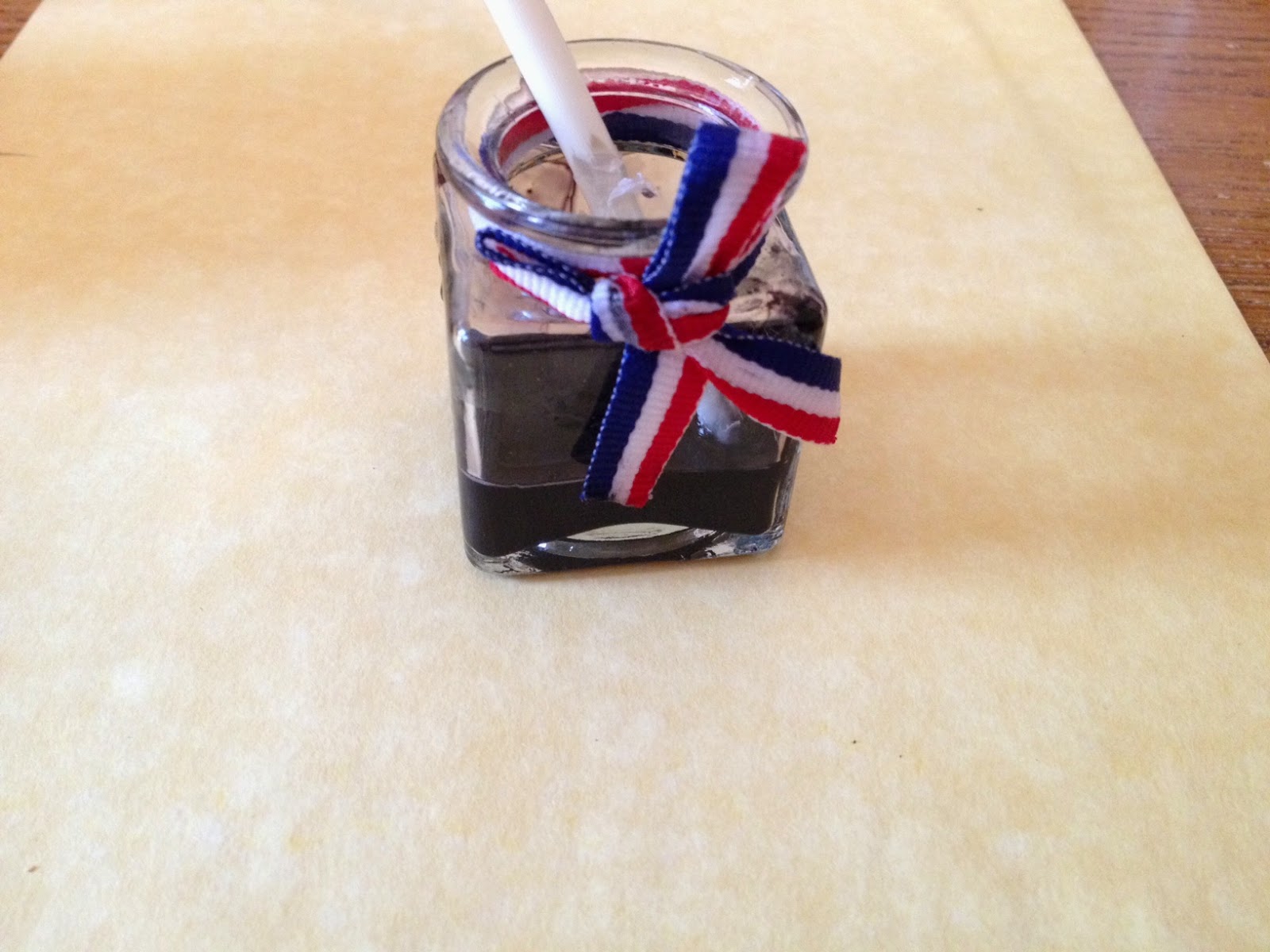 The came the challenging part: actually writing with the quill. I seemed always to have too much ink or not enough, since the quill is basically just a tube. The more ink it takes up, the more it's going to drop in a blob as soon as you touch it to paper. And yes, it needs to be dipped again every two or three letters--or at least it did the way I was writing. 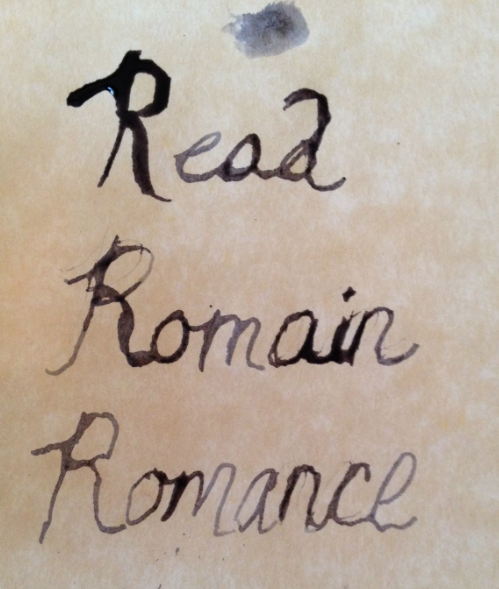 Rough as this heading looks, it's not too bad compared to what happened when I tried to write in a regular line. There followed a phenomenon familiar to all left-handers, known by the scientific name of "dragging your hand through everything you just wrote." My deepest apologies to Jane Austen for the mess I made of one of her immortal lines.

By this point, the quill's nib was already starting to split. This is when a Regency hero or heroine would have taken up a pen-knife and whittled it back into shape. Since I don't have a pen-knife, I did just what you'd expect. I tried to draw a self-portrait. 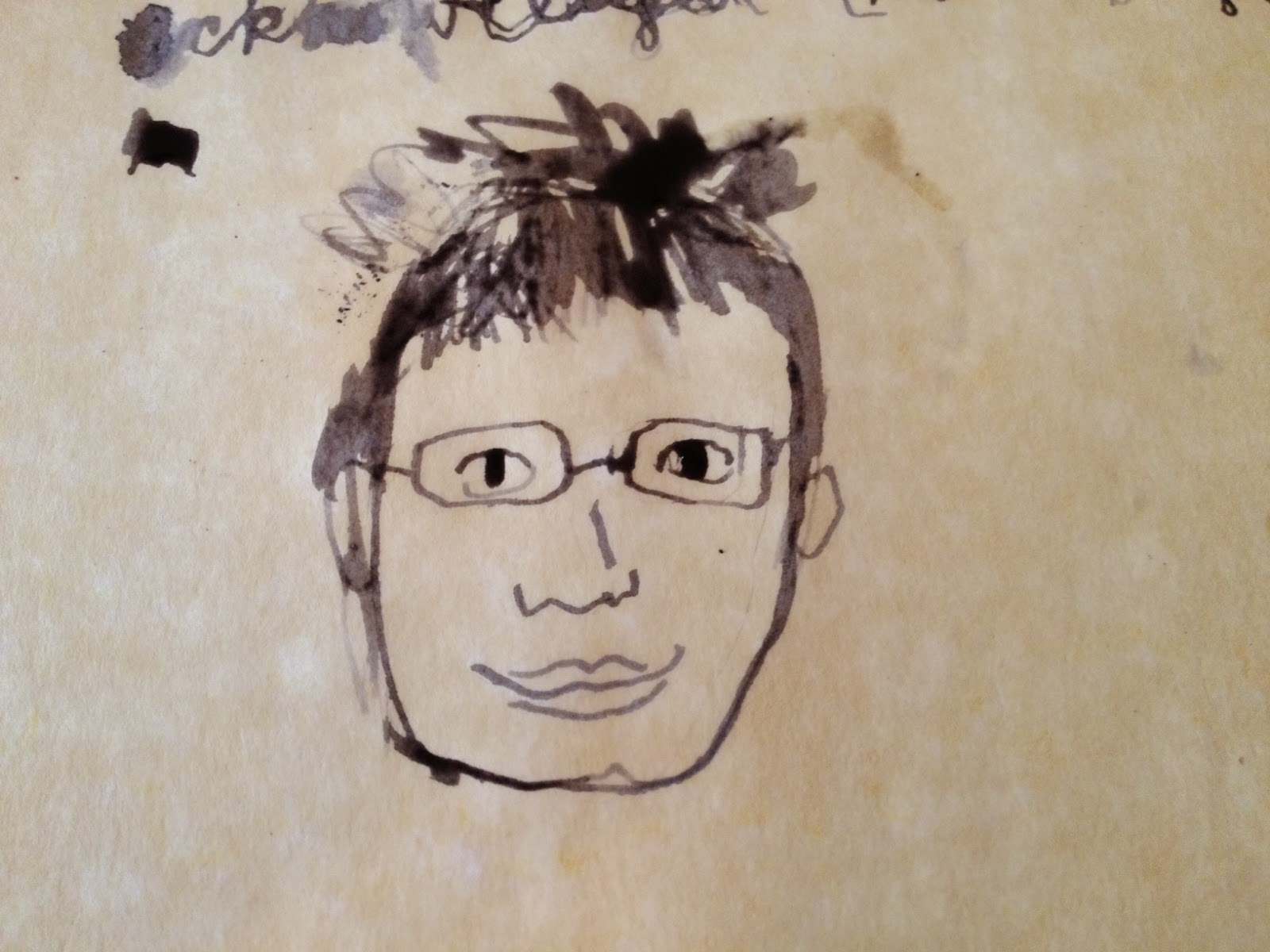 Honestly, this is about as well as I could do with any writing implement. We have here a recognizable picture of a human with crazy hair, which is all I could ask for in a self-portrait.

So, what did I learn? I think I gave Henry an accurately difficult time using a quill with his off hand. And also, if any of you want to borrow a pen and ink set, I can hook you up. The quill is nearly torn up, but there's still enough ink powder to go EVERYWHERE.

Ever tried a bygone way of doing something--writing, maybe, or cooking, or dressing? What did you think? How did it go for you? (If you got ink powder everywhere, please do tell so I don't feel like I'm the only one.)

Historical romance author Theresa Romain pursued an impractical education that allowed her to read everything she could get her hands on. She then worked for universities and libraries, where she got to read even more. Eventually she started writing, too. She lives with her family in the Midwest, where she is working on her next book.
Website: http://theresaromain.com
Facebook: http://www.facebook.com/AuthorTheresaRomain
Twitter: @TheresaRomain