It wasn't too long ago that we were all complaining about the frigid temperatures and the white stuff that refused to leave. I swear that was the longest winter ever. Now we find ourselves blessed (or cursed) with humidity and rain that won't quit. Ugh. I'm a 70 degrees kind of girl. If you can adapt to that kind of weather, more power to you. I guess that's why I hide behind my computer and write...in the air conditioning.

I hope you're enjoying your summer. I'm getting pretty excited about the upcoming release of My Highland Spy, the first in my new Highland Spies' series, and I hope you are too. I still sigh when I see that dreamy Jon Paul cover. 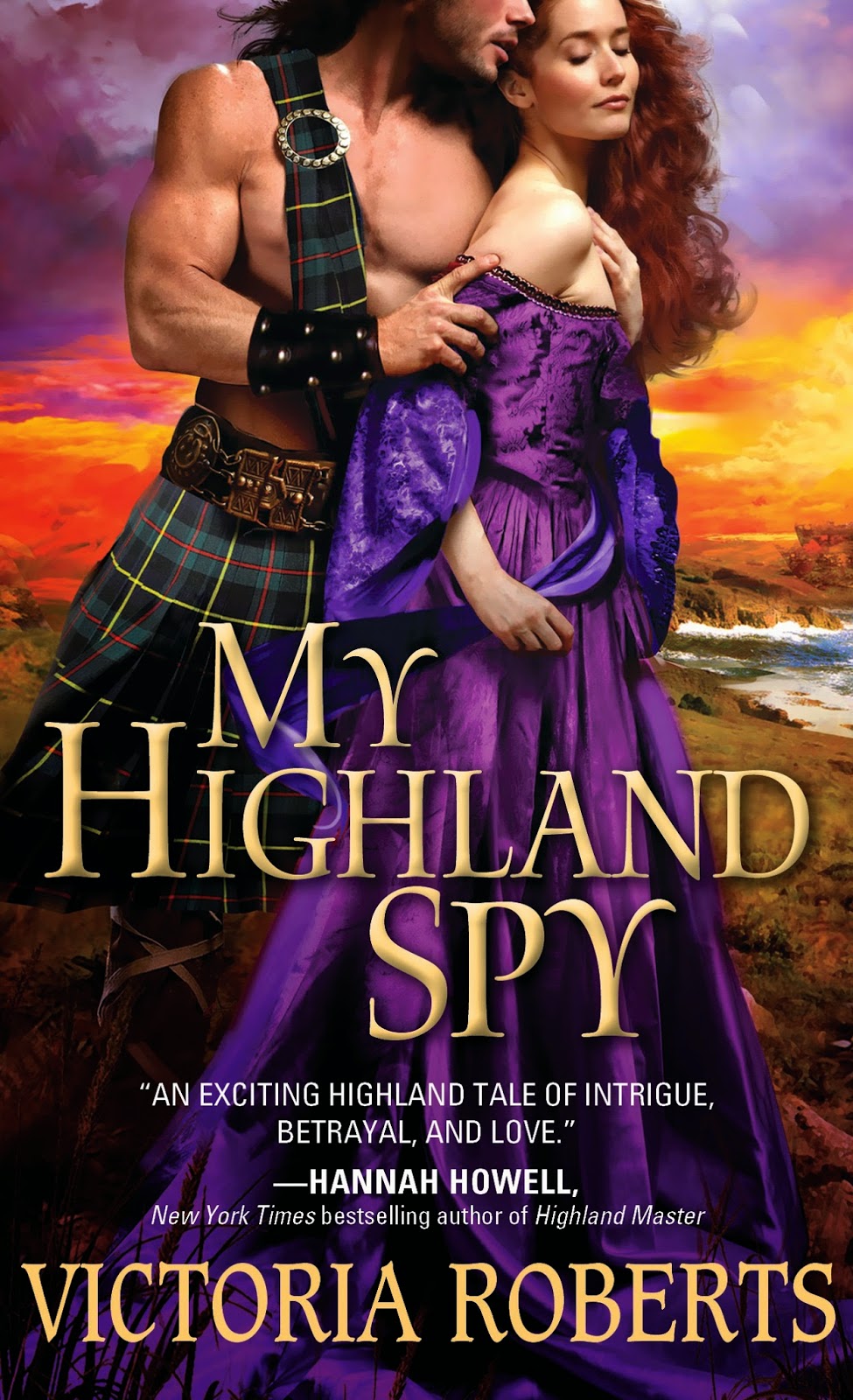 Here's a little sneak peek of what you can expect in September.

She had made a deal with the devil, King James to be precise.

Lady Ravenna Walsingham silently cursed her liege as she stood huddled against the darkened wall of an alley near the London docks. She closed her eyes as a light rain misted her face. Although she felt miserable, she knew the information she sought would assist the Crown in discovering the latest conspiracy against it.

She pulled her heavy cloak tighter around herself, shivering from a sudden chill. The cold could have been due to the scantily clad clothing she wore underneath, but she quickly pushed back the thought. All she needed was to catch a glimpse of who dastardly Lord Cobham was conversing with in the latest string of unsavory establishments.

She wiped the drops from her face and had just taken a step forward when a couple of drunken men walked out of the Devil’s Tavern. As the sound of laughter approached her, she backed hastily into the shadows. The men passed her and she studied them closely. To her regret, neither man was Lord Cobham. Although the light barely illuminated their features, she knew the man she sought was shorter—at least a head shorter than she was.

The rain hardened as Ravenna quivered against the wall like a drowned rat. Lord Cobham was more than likely not coming out any time soon. That’s when she decided to hurry things along and make her move. Besides, if she didn’t meet her driver, George, within the hour, he would undoubtedly come looking for her. The faster she could determine the person or persons with whom Lord Cobham was conspiring, the better. She was tired, cold, and wet, and wanted to be home where a warm bed awaited her.

She made her way toward the back of the brick building. The stairs leading to the door were dark. Of course they were. Was it too much to ask for at least one assignment that worked in her favor? She climbed the steps carefully and tried not to stumble over her own two feet. Fumbling for the door, she found the latch and discreetly entered.

The small room looked like a crowded hovel, and she suddenly had a strong desire to bathe. More than a handful of women readied their hair in the looking glass as the sound of boisterous laughter came from the adjoining room. The women wore little clothing, which reminded Ravenna to remove her cloak. She tossed her protective garment into the corner and placed her arm over her chest. She suddenly felt very open to the view of others—not to mention that her laced bodice left very little to the imagination.

A large-bellied man came into the room and waved the women out. “Make haste, ladies. My customers need to be served. You can’t do that if you spend all your time in here pampering yourselves.” As one of the women walked by, the burly man slapped her on the bottom. He looked up, and his cold, dark eyes met Ravenna’s. “You’re the new girl, but you will quickly learn your place. Don’t just stand here staring at me. Get out there.”

Ravenna nodded and rushed past the man, feeling his gaze upon her. She followed the lead of the other women and picked up a tray from the table. As she looked around the smoke-filled room packed with men, she noted the large barrels and ship masts built right into the structure. Being so close to the River Thames, she could see why. The tavern was often frequented by men of the sea, but she knew not to be fooled.

The Devil’s Tavern held many secrets.

The establishment was notorious for housing smugglers, cutthroats, thieves, and pirates. If Lord Cobham was meeting anyone here to further promote his illicit behavior, she was going to find out.

“This place keeps getting better and better. I haven’t seen you here before.” He lowered his head and sniffed down her body. “Mmm…you smell of lavender.”

She didn’t think it wise to tell the man what he smelled like so she politely nodded. When she tried to stand, he pulled her back down and held her with a firm grip.

“Let me tell you a little secret.” He lowered his voice and leaned forward. “I think you are by far my favorite.” His hand encircled her breast, and it took all of Ravenna’s might not to slap him. And that’s when she looked up and noticed the men.

Lord Cobham was walking straight toward her. She hastily glanced to Cobham’s right and saw Charles Paget. What was he doing here? She couldn’t risk being spotted, so she did the first thing that came to mind. She turned in the lap of the man who held her and brought his lips to hers.

The man’s comrades cheered him on, and his hands roamed all over Ravenna in places they shouldn’t. She had to endure quite a repulsive kiss and felt as though she needed a cloth to wipe away the slobber that had escaped the man’s lips. How she despised this part of the masquerade! Only when she was confident that the two men had departed did she dare pull back, attempting not to think about the bile that rose in the back of her throat.

She placed her finger to the man’s lips. “I have something for you. I’ll be right back.” When the man nodded, as she knew he would, she made her escape to the back room. She didn’t want to spend another moment in that place. Grabbing her cloak from the corner, she bolted out the door.

She did not look back.

What was Lord Cobham doing with Charles Paget? She thought Paget was still in Paris. No matter, she would simply give the information to her uncle. She wrapped her cloak tighter around herself as the cool breeze whipped her cheeks. She walked with long, purposeful strides, clutching the dagger in her pocket. She didn’t like walking the streets of London by herself, let alone by the docks in the darkened hours of the night. One of these days her luck was going to run out. She prayed it was not at this moment.

Her uncle’s carriage waiting at the end of the dimly lit street was a welcome sight. George climbed down upon her approach and extended his hand. He was a large man with graying hair at the temples and stood well over six feet tall. He always aided her when she needed protection from places like the Devil’s Tavern.

“Lady Walsingham, did you find what you were looking for?”

Ravenna climbed into the coach and breathed a sigh of relief. She sat back, closed her tired eyes, and fell asleep to the gentle, rhythmic movement of the carriage and the sound of clomping hoofbeats. When the carriage suddenly stopped, she was jolted awake.

“My lady, we have arrived.”

She took George’s hand and climbed down. “Thank you. Could you please ask my uncle to pay me a visit on the morrow?”

He nodded. “Of course. Have a pleasant evening, Lady Walsingham.”

Ravenna walked to the front of the manor house and quietly opened the heavy door. It was nearly midnight and the house was silent. Her sisters were already in bed. She hated when she had to be away from them, but at least she would be there in the morning as the girls broke their fast.

She lifted her cloak and climbed the steps on the tips of her toes. As she made her way down the hall to her bedchamber, she passed the family portraits that hung on the wall. She could feel her father’s gaze upon her and couldn’t help but wonder what he would think of her now. She closed the door to her chamber, and when she heard the soft click of the latch, she sighed. Removing her cloak, she tossed it onto a chair as a faint smell of smoke invaded her senses.

A voice spoke from her bed and Ravenna jumped.

“Where the hell have you been? And what in the name of God are you wearing?”

GIVEAWAY: Name your favorite summertime pastime, and I'll pick two peeps to win a Highland Spies' t-shirt, an autographed postcard, and bookmarks. (US and Canada only, please) Drawing will be held Monday, July 21, 2014.