Release Week: Once Upon a Kiss 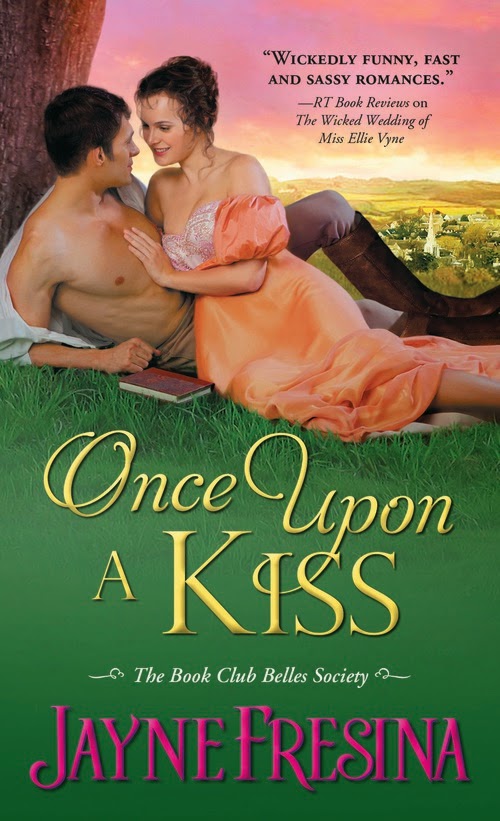 In Once Upon a Kiss, Justina and her fellow members of the Book Club Belles Society are in the midst of reading Jane Austen's Pride and Prejudice, when a handsome, arrogant bachelor named Darius Wainwright comes to their village. Naturally, it's not too long before he's being compared to the haughty Mr. Darcy and while that's good news for some of the Book Club Belles, it's not appealing to Justina. She's been waiting eighteen chapters for Lizzie Bennet to give Mr. Darcy a firm set-down and then run off with the delicious Mr. Wickham. Oh yes, she's already decided how that book ought to end.
Imagine her distress when she begins to find her own life following the actual plot of Miss Austen's novel— rather than any of the far more exciting and somewhat lurid plans she had in mind for herself.
Since Jussy likes to write in her diary every evening, mostly to unburden her many and varied sins, I took a peek into it and here I'll share with you, some of the mischievous young lady's alternative endings for the characters in Austen's Pride and Prejudice. And possibly for herself too!

5. Lizzie Bennet escapes the villainous Darcy's clutches, runs off to Scotland with Mr. George Wickham and has three, very clever children who find cures for gout, influenza and world famine. (Side note: Perhaps America would suit them better? Need to take jam and marmalade. They may not have any good. Mama would know.)

4. Lizzie marries Mr. Collins and transforms Rosings into a hospital for the poor. While having a scandalous love affair with George Wickham, who turns out to be a pirate, a highwayman, a spy and a highly-skilled heart surgeon.

3. Lizzie saves her beautiful, sweet sister from being forced to marry the evil Mr. Darcy when she pries through his manor house and finds that he already keeps three other wives shut up in the attic. (Side note: Too far-fetched??)

2. Mr. Darcy is seized by some curious tropical disease which renders him mute, causes him complete memory loss regarding anything Lizzie ever said or did to him, necessitates the shaving of his head and confines him to a bath-chair, reliant on the kindnesses— and careful steering— of others. In an act of great self-sacrifice and pity, Lizzie Bennet devotes herself to his nursing and a marble statue is erected in the grounds of Pemberley in her honor. Lady Catherine de Bourgh is so grateful (and changed when her spoiled daughter runs off with a chimney sweep) that she leaves all her wealth to Lizzie, who uses it to promote education and rights for women.

1. Jane Bennet has to be saved from her miserable marriage to the tyrant Mr. Wainwr...Darcy. But during the valiant midnight rescue and flight from Pemberley, her beloved sister drowns in the pond. Lizzie's ghost haunts the estate forever after, regularly removing all Mr. Darcy's waistcoat buttons and cutting holes in his unmentionables. Until he is forced one day to say out loud that he is extremely sorry he ever underestimated Miss Justina...oops...Miss Elizabeth Bennet. (Side note: Mr. Darcy must never marry anyone else or the haunting won't be half so much fun.)

So those were Justina's hopes for the ending of Pride and Prejudice, as far as I can make out through all the ink blots and smudges! But of course, she, just like Miss Jane Austen's heroine, is destined for a different "happy ever after." 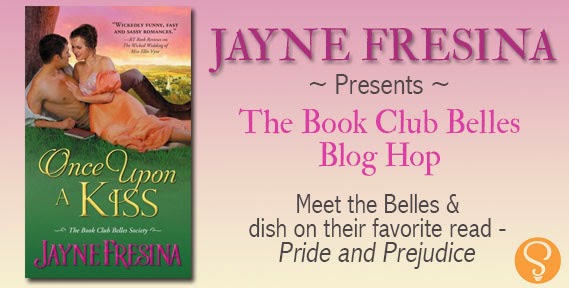 Once Upon a Kiss

In the sleepy village of Hawcombe Prior, the five young ladies of the Book Club Belles Society are looking for their own leading men.

The Perfect Hero
When handsome, mysterious Darius Wainwright strolls into town, the Book Club Belles are instantly smitten with this brooding good looks and prideful demeanor. It's as if he walked out of the pages of their favorite new novel, a scandalous romance called Pride and Prejudice. But Justina Penny can't understand why her fellow Belles are starry-eyed in the newcomer's arrogant presence—surely a wicked Wickham would be infinitely more fun...

An Unlikely Leading Lady
Justina is the opposite of Darius's ideal woman—not that he's looking for romance. But when he discovers her stealing apples from his uncle's orchard, he can't resist his own thieving impulse. A stolen kiss from the mischievous Miss Penny leaves Darius wanting much, much more. If it's a dashing villain she desires, Darius is more than willing to play the part...

"Decidedly humorous, as well as sensual...a true charmer of a read."—RT Book Reviews