Sorry this post is so late going up. I've been a cyber-Robinson Crusoe this morning...no internet, no TV, no phone. My only connection with the 4G world was my smart phone and it's IQ is so much higher than mine, I only managed a quick tweet through it to let the world know I was disconnected. The Verizon guy is here now, so I'm on again, off again. Cross your fingers that this connection will hold till I finish.

In a couple weeks, my DH and are going to not one, but TWO reunions in one weekend. His family gets together for a potluck each year in the same city park at the end of June. When I first started attending these get togethers, they were massive. The DH's father was the oldest of 11 and with all the aunts and uncles and cousins and their husbands and wives and kids .... well, you do the math. Even now, I long for name tags.

When our kids were little, we had family reunions on my side of the house too. But instead of a single afternoon's picnic, we gathered for a whole weekend at different locations each year. We went to midwestern lake cottages, to Gatlinburg, to the county in Virginia where our ancestors first settled in this country, and one memorable year, we migrated to a Wyoming dude ranch. We played together. We tried new things. My kids got to know their cousins. Unfortunately, since my grandparents passed, the reunions ended with them.

Then the same weekend as my DH's family reunion, we're attending his high school reunion. This will be special for him since he went to school with these kids from kindergarten all the way through 12th grade. I attended 3 different elementaries and 2 high schools. I can't imagine what knowing the same kids through all my growing up years would have been like, but it sounds nice.

How about you? Are you planning a reunion this year? What sort of things do you do at your gatherings? 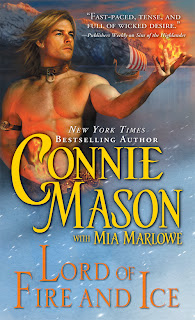 In my upcoming release LORD OF FIRE AND ICE, Brandr the Far-Traveled is having a reunion of his own. He's coming home again. But he forgot that while he was gallivanting around the world,  his small corner of it has changed.  People who were once his father's allies have put a slave collar around his neck. And the woman who holds the end of his tether is both his blessing and his curse. LORD OF FIRE AND ICE is a featured early access title on the Discover a New Love site.
Click here to learn how you can get yours for only $1.67!