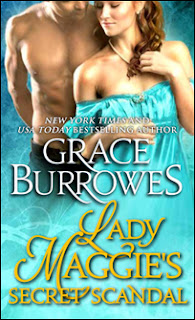 People ask me if my day job ever finds its way into my Regency Romances, and the answer is usually, “not directly.” Because I earn part of my living in a child welfare courtroom, I probably need happily ever afters more than more people, but I didn’t give the question much consideration beyond that.
Then I realized that in “Lady Maggie’s Secret Scandal,” I’d written a heroine who’d been adopted by her ducal family, and from the age of five, raised under Their Graces’ roof. I represent a lot of children who are growing up in adoptive homes, and while I know the outcomes for them are overwhelmingly positive (according to statistics, anyway), I also know some of those children need a lot of time and help to come to terms with the turns their lives have taken.
They worry about their biological families, they worry that they’ve betrayed those families, they worry that if they were adopted away from their birth families, then their own children can be taken from them… Such a lot of worry, and in children who ought to be fretting over nothing more significant than grades, what to wear to school tomorrow, and whose turn it is to hog the remote.
And then I think about those posters we see of children who were raised in foster care, adoptive homes or other nontraditional homes. Those kids grow up to be… Whoopi Goldberg, Steve Jobs, Barack Obama… I realized that such people often develop inner resources that arguing about the remote doesn’t engender.
Maggie Windham is one of those children whose circumstances have made her very strong early in life. The difficulty she’s facing is one many of us face: Our dearest, most hard won coping mechanisms have far, far outlived the circumstances that gave rise to them. Maggie is self-reliant to a fault, unwilling to cause her adoptive ducal family any difficulties, and unwilling to confront the trouble lurking in her past… and she’s already past that non-negotiable indicator of permanent marital hopelessness, her thirtieth birthday.
Fortunately for Maggie, investigator Benjamin Hazlit can smell trouble on a woman from across a crowded ballroom, though in Maggie’s case, her mille fleurs perfume also draws his notice… as does her loneliness. Whereas Maggie won’t risk hurting any of her loved ones to win free of her difficulties, there’s nobody and nothing Benjamin won’t confront to win Maggie’s heart and slay her dragons.
I enjoyed writing this story more and more as the book unfolded. Maggie and Benjamin both have to reach for their courage—and for each other—with both hands to win their happily ever after.
Can you think of a time when you had to embrace change to solve a problem? To one commenter below, I’ll send a signed copy of “Lady Maggie’s Secret Scandal.”

To read an excerpt from Lady Maggie's Secret Scandal or to order the book, go to graceburrowes.com