Art moves me. Several ideas for stories have come from paintings. I like to stroll through portrait galleries, picking up costume details for my historical characters. So believe me when I tell you I spent one of the best days of my life at the National Gallery in London a few years ago.

But not for any of the reasons listed above.

On that day, I became acquainted with Titian's masterpiece Noli me tangere, and learned a little of its story. Here is part of the painting. Some of the landscape has been cropped on either side. 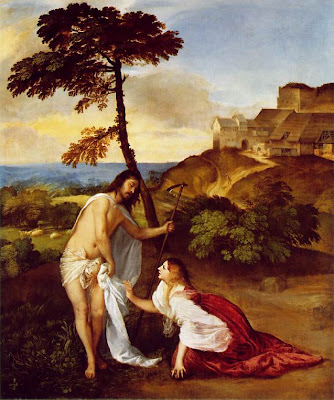 It's a canvas full of movement as Mary Magdalen suddenly realizes who she's been speaking with and drops to her knees, her sleeves billowing. Jesus pulls his grave clothes away from her hand, saying, "Noli me tangere." Touch me not, because He had not yet ascended. There is such an expression of tenderness on Christ's face as He looks down at her. You can almost feel her quivering joy over the risen Savior.

Because I am a Christian, this painting means a lot to me. But once I learned its history, it meant even more.

During WWII, all the cultural treasures from the National Gallery were spirited out of London and taken to hiding places in the country lest the museum be struck in the Blitzkrieg and the art lost forever. All except this painting. The people of London begged that it be left. They would line up, circling the block waiting to file into the echoing galleries for a chance to view Titian's affirmation of life.

As much as they needed their strictly rationed butter and sugar and blackout shades for their windows, they needed hope. They needed to know that beyond death, there is something more, that the world their senses revealed to them was not the whole story. There is another reality beyond what we can see and taste and hear.

CS Lewis would call it "the Deep Magic" and that's what I'm celebrating today.


You can find Mia at MiaMarlowe.com, Facebook and Twitter. If you're going to be at the RT Convention in Chicago next week, be sure to say hi! She'd love to meet you!