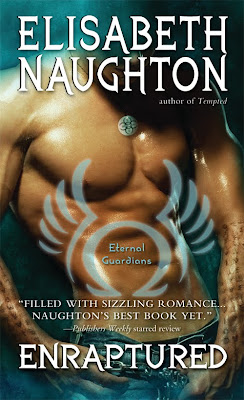 Orpheus—To most he's an enigma, a devil-may-care rogue who does whatever he pleases whenever he wants. Now this loose cannon is part of the Eternal Guardians—elite warriors assigned to protect the human realm—whether he likes it or not.

Orpheus has just one goal: to rescue his brother from the Underworld. He's not expecting a woman to get in the way. Especially not a Siren as gorgeous as Skyla. He has no idea she's an assassin sent by Zeus to seduce, entrap, and ultimately destroy him.

Yet Skyla herself might have the most to lose. There's a reason Orpheus feels so familiar to her, a reason her body seems to crave him. Perhaps he's not the man everyone thinks... The truth could reveal a deadly secret as old as the Eternal Guardians themselves.

Publisher's Weekly listed ENRAPTURED as a Top Ten Romance of Spring 2012, gave it a starred review and said, "Filled with sizzling romance, heartbreaking drama, and a cast of multifaceted characters, this powerful and unusual retelling of the Orpheus and Eurydice story is Naughton’s best book yet."

I'm blogging all over during the month of April, promoting the book. You can find my blog tour on my website and follow along for multiple chances to win ENRAPTURED. In addition, I'll be at the RT Booklovers Convention next week (my first!) giving away books and prizes and chatting about Orpheus and Skyla to whomever will listen. And through today as well, the release day party for ENRAPTURED over on my blog is still live, so head over and enter to win tons of books from some amazing authors.

But to celebrate the release of ENRAPTURED here with my Sourcebooks sisters, I've got one more contest! I'm giving away all four Eternal Guardians books! FOUR winners! (One winner for each book.) Just leave me a comment on this post to be entered. Then go out and get your copy of ENRAPTURED today!