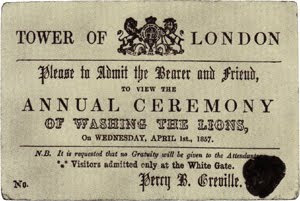 by Amanda Forester
.
Happy April Fool's Day - that lovely day when people can play all sorts of practical jokes on you with equanimity, because somehow making people look foolish is the entire point of the day.

This got me thinking about why on earth such a day would be invented in the first place. Why have a day celebrating the joy of laughing at the expense of others? And when did this day come into existence? Would my Scottish medieval heroes be joining in the fun of humiliating their friends and relations?

The actual beginning of April Fool's Day is a bit difficult to determine. Different opinions exist, but the most likely culprit for beginning this ruckus is Pope Gregory. No, he was not a huge proponent of the practical jokes (that I know of) but in 1564 he decreed that the Christian world would change calendars (hence the Gregorian calendar), which moved New Year's Day to January 1. Previously, the New Year had been celebrated the week of March 25-April 1, and since this was before the era of phones, facebook, and twitter, the news of the change spread slowly. Over time people who considered themselves urbane and worldly wise ridiculed those who had not yet adopted the new calendar. Those who continued to celebrate the New Year on April 1st were called, yup you guessed it - April Fools!

Over time it became a tradition to mock not just your slow-witted neighbors, but anyone possible. In Scotland, the mischief making is dedicated to two days, and has been known as "April Gowk" ('gowk' is Scots for a cuckoo, the sign of a fool). The second day of this festival of mockery is called "Taily Day" and has become known for jokes relating to a person's backside. Apparently, one of Scotland's claims to fame may be the ubiquitous "kick me" sign taped to an unwitting person's back.

Whatever the beginning of April Fool's Day, it has certainly been a tradition for hundreds of years to send people on a "fool's errand" by giving them an impossible task or tricking them into going somewhere for nothing. Take the example above from 1698, where people were tricked into buying a ticket to the Town of London to see the "Annual Ceremony of Washing the Lions".

Are you a practical joker? Tell me your favorite April Fool's joke!