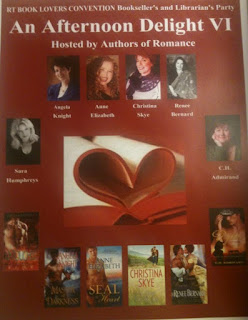 Hello everyone! I'm pinch hitting for my friend Anne Elizabeth today. We're here in Chicago at the 2012 Romantic Times Convention and Anne asked if I could post for her on the blog today. I was more than happy to help out my friend. I don't know if everyone knows that Anne had a bit of a mishap. She tore her ACL and fractured her tibia! The poor kid is wheelchair bound but she's still workin' it at the convention. 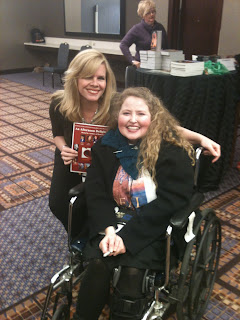 At the RT Convention there are tons of workshops/sessions that are for either readers, writers or librarians/booksellers. For the past few years, Anne has hosted an event for librarians and booksellers called Afternoon Delight. This was year number six and when Anne had a space available, I was only too happy to jump on board. It was such a thrill to be among this group of talented authors. Christina Skye, Angela Knight, C.H. Admirand, Renee Bernard and Anne Elizabeth. We had some super cute tote bags but the coolest part was this cake with all of our book covers on it. 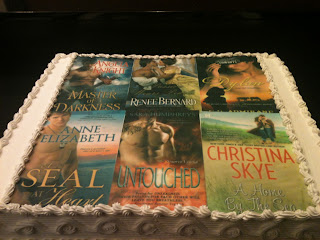 I got there a bit early so I could set up my table full of goodies.  Made up some treat bags, there were copies of UNTOUCHED, bookmarks and some of those fun little temporary tattoos. Oh, and candy!
Here's a shot of my table just before the doors opened. It was basically empty by the end of the hour. I had such a blast meeting all the gals from various libraries, B&N's, local book stores and even some online booksellers. It was plain old fun! I look forward to doing this every year at RT! 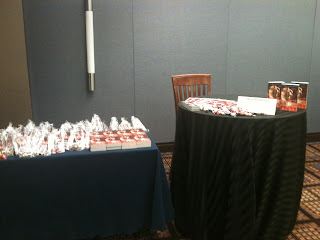 I have found the romance community to be a supportive, fun and positive group of people. This bunch of women in no exception. They are funny, smart and engaging....my kind of gals.