By Elisabeth Naughton March 25, 2012
Have you heard?
Sourcebooks is letting READERS pick the next 99 cent ebook deal!

Starting Sunday, March 25, Sourcebook invites you to take part in the first ever Sourcebooks eBook Bracket Challenge! By using the Twitter hashtag #eBookBracket, readers can vote over Twitter for the next eBook from Sourcebooks they want to see discounted to $0.99 for one week in early April. 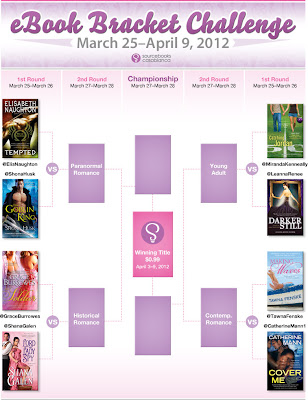 1. You MUST use the hashtag #eBookBracket for your vote to be counted—otherwise it won’t count!

2. Please remember this is a FRIENDLY competition

You can see the full bracket at the eBook Bracket Challenge Page on Sourcebooks.com: http://bit.ly/FOuWWs. This is where we will announce the titles moving on to each round, so check it out every day this week!