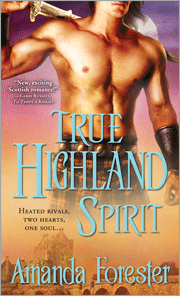 True Highland Spirit is officially released!!! I'm so excited to see the launch of this book!

A feisty lass who knows how to wield a sword, a French knight with a dangerous secret, a lost treasure, a cold hearted villain, and a war for survival against an unbeatable foe all come together to hopefully take the reader on a spirited adventure. This book is the third in the Highland series, and continues the tale of the McNab clan in the war with England in 1356. This particular campaign against England was particularly interesting because French troops traveled to Scotland to join the Scots in invading Northern England (in actual history - I didn't make that up!). When I discovered French knights gallivanting about the Scottish countryside I knew I had to write that story!

This book was close to my heart, which can be a joy and a nightmare to write. I really felt I knew the characters, and they would get irate at me if I didn't write things down correctly. There were so many strong characters in this book it was a challenge just writing that first draft. I am absolutely thrilled to have this story finished and ready for reading. I hope you will enjoy my strong willed characters as much as I do, especially now that they are done torturing me to write their story!

Here are what some reviewers are saying about True Highland Spirit:

Forester’s third 14th-century Highlands romance unites a French knight and a formidable Highland lady. Morrigan McNab joins her older brother in thieving to help provide for their clan. Though usually dressed for battle, Morrigan unexpectedly uncovers her feminine appeal when she meets French minstrel Jacques. And when Morrigan is told to kill an enemy of the clan, she meets the elusive minstrel again and learns that he is Sir Jacques Dragonet, a French knight whose lord plans to enlist the help of the Scots against the English. Morrigan can fight as well as any man, and Jacques is as drawn to her tenacity as her beauty, though he knows his secrets could prevent them from ever being together. The realistic battle scenes form the perfect backdrop for the burgeoning romance and a subplot involving hidden treasures of the Templars. ~
Publisher's Weekly, Starred Review

Forester’s third book in her Highlander series is a riveting, diverting read. She blends a fast-paced adventurous plot with political and religious intrigue to form the perfect backdrop for a delightful romance. The humor and interaction between two unique characters is an ideal counterpoint to the daily life of a typical Scot. ~RT Book Reviews Top Pick!

Since I am indulging in shameless promotion this morning this would be a great time to tell you that my two previous books, The Highlander's Sword and The Highlander's Heart, are now on sale as e-books!

In True Highland Spirit my heroine has given up ever getting married and doing the "normal" things a woman of her era would do. Instead she tromps off to war to protect her clan, and much to her surprise finds love. Have you ever found love when you least expected it? One lucky commenter will win a copy of True Highland Spirit!! (Be sure to leave your name and e-mail!)