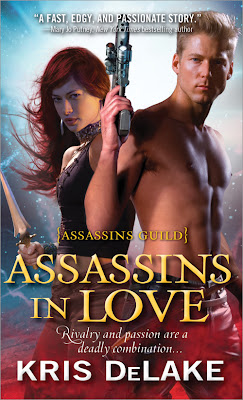 I’ll let you all in on a little secret… you’ve met Kris DeLake before :) It’s one of the pen names of Kristine Grayson, who has visited the Casa Authors before, promoting her updated fairy tale series!

Assassins in Love tells the tale of two brilliant assassins in a fascinating futuristic world, who need each other to finish one more job before calling it quits in the highly respected killing business. But it’s more of a challenge than either expected!

The hero, Misha is a part of the Assassins Guild, an organization with many rules to adhere to during missions. Rikki, the feisty heroine, never wanted to join an organization that could limit her capabilities on a job. A series of mishaps plagues their every move, and if it’s not Misha helping Rikki with a bungled getaway, then it’s Rikki helping Misha to hide some damning evidence. They can’t seem to get anything right… except for the way they feel about each other. Misha and Rikki also have secrets in their past that will change everything, and could jeopardize completing their final missions. Will they be able to overcome seemingly impossible odds—and impossibly hot chemistry—before it’s too late?

It reminds me a little bit of Mr. & Mrs. Smith… in Space! The advanced praise is great, and I for one, can’t wait to see where Kris takes this new fantastic series:

“Set in a universe where murder can be legal, this is an exciting adventure with a hot romance between two fascinating characters. Their profession and the fact that no apologies are made for it make for an intriguing story. One hopes there will be a second story featuring the heroine’s friend.”  —RT Book Reviews, 4 ½ Stars

“DeLake takes readers on a fast ride with this passionate futuristic tale, the first in a series... Makes for a compelling, hot, and believable tale.” —Publishers Weekly

And what would a launch party be without a giveaway?! We have two copies of Assassins in Love up for grabs—just tell us what your favorite science fiction movies/books are… or if sci-fi isn’t your cup of tea, what’s a recent book you read that you’ve been telling everyone about?

Two lucky commenters will win 1 copy each—US and Canada only, please leave an email address where we can reach you. Winners will be chosen on Thursday!

When one killer falls for another…
Agent: Misha
Profile: Highly trained in every method the assassins guild has to offer. Always goes by the book.

Agent: Rikki
Profile: Rogue assassin who kills only to rid the world of hardened criminals. Hates organizations. Always does it her way.

Love becomes a matter of life and death…
Misha's mission is to get Rikki to join the guild or give up her guns. He completely underestimated the effect she would have on him...and what heat and chaos they could bring to each other...

ABOUT THE AUTHOR
KRIS DELAKE is a pseudonym of HUGO award-winning author Kristine Kathryn Rusch. Under three pseudonyms, she has sold 10 million copies of her books. Fans of her award-winning paranormal romances know her as Kristine Grayson. She lives with writer Dean Wesley Smith in Oregon. For more information please visit http://krisdelake.com/, follow her on Twitter @kristinerusch, and check out her blog: http://kriswrites.com/!