Even for a Zetithian, Tarq Zulveidinoe's sexual prowess is legendary. Believing it's all he's good for, Tarq sets out to perpetuate his threatened species by offering his services to women across the galaxy...

BUT ONE FORCE CAN BRING THEM TOGETHER...

Lucinda Force is the sensitive dark horse in a self-absorbed family, repeatedly told that no man will ever want such a plain woman. Lucy longs for romance, but is resigned to her loveless lot in life-until Tarq walks through the door of her father's restaurant on Talus Five... 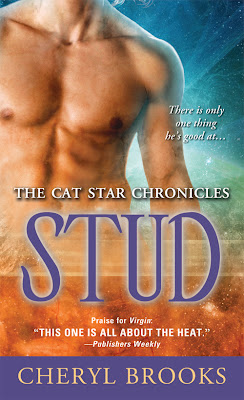 I've often been asked how long it takes to write a book, and I honestly can't answer that question. I do know that the manuscript for Stud was due April 1, 2011, but I have no idea when I first began writing it. One of these days I'm going to write down the date that an idea for a book first occurs to me and actually document how long it takes from conception to delivery. Hopefully, I'll remember to do that.

It seems like such a short time ago that I was doing the research for this book, watching videos on how to make primitive weapons, picturing in my mind the mountain range through which Lucy and Tarq had to travel and the caves where they took refuge with a band of alien outcasts. I'm still there with Lucy as she discovers how to catch fish with no fishing tackle whatsoever. I watch Tarq as he makes a bow using nothing but a knife. I can see him sitting near the campfire in the huge cavern, chipping away at rocks to make arrowheads. I feel both of their insecurities as well as their pain when they remind themselves why their love is hopeless.

And yet, the book is sitting right here on my desk as I write. I can hold it in my hand and flip through the pages. There are even reviews posted already, and the first stop on the blog tour goes up today.

I can't say I'm not prepared. The guest blogs are all written, except for two interviews for which I have yet to receive questions. But I think any author can relate to this when I say that even though it takes ten months to a year to get a book in print (and that's after the manuscript is written), and you think the day will never come, eventually, like Christmas, it arrives and finds you scratching your head wondering how it got here so quickly.

And now, after all of that writing, editing, revising, and planning, February 1st has finally arrived, and I'm here today to celebrate the release of Stud, the eighth book in the Cat Star Chronicles series. To kick off the blog tour, I'm giving away a signed copy of Stud to one lucky commenter today. If you don't win this time, there are still plenty of chances on the tour for you to win a sizzling hot STUD of your very own!

Here's a little excerpt to get you started. It's been, um, censored slightly, but probably still rates a PG-13. Enjoy!

There was only one thing he was good at…

***
Tarq smelled her before he ever laid eyes on her—a glorious, delectable aroma that curled through his head and shot straight into his bloodstream. Closing his eyes, he inhaled deeply as the effect of her fragrance hit his c--k like a pulse blast, obliterating his every thought with the instantaneous ecstasy of an erection so hard it made his head swim.
He glanced away from his menu, taking in the shape of her legs out of the corner of his eye—what he could see of them, that is. Her baggy trousers and apron concealed everything about her legs except the fact that she had two of them.
“Hi, my name is Lucy, and I’ll be your server,” she said. “Do you already know what you’d like, or do you need more time?”
Tarq smiled to himself as he shook his head. No, he didn’t need more time. He knew exactly what he wanted. “You,” he replied. “I’d like a full order of you.”
“I—I beg your pardon?” she stammered.
He could hear the words catch in her throat and hoped he’d just done the same thing to her that she’d done to him. She was human—he could tell that much from her voice—but a human female who didn’t mask her natural scent with heavy perfumes was rare. Tarq could never understand why they did that, but then, humans weren’t the dedicated scent breeders that Zetithians were. It didn’t matter what a woman looked like; if she didn’t smell right, his c--k was going nowhere.
This woman, however, wasn’t hiding her scent and it assailed him full force. His mouth filled with saliva at the thought of tasting her—to the point that Tarq had to swallow before he could speak. With one more deep, satisfying breath, he looked up at her.
No, she wasn’t beautiful, but the way she stared down at him, round-eyed and speechless, was enough to make him want to purr. She was young, but not too young to mate with a man of his age. Her dark hair was pulled back from her face, though a few soft tendrils had escaped near her temples, accentuating fair skin and round cheeks that needed no artificial enhancements to put a rosy blush on them—though his words might have been responsible.
The expression in her deep brown eyes intrigued him. It was as if she wasn’t sure if she’d heard him correctly and was somewhere between laughter and astonishment. Tarq drank in her appearance just as he had done with her scent. Her nose was dusted with freckles, her dark eyelashes curled enticingly, and, as he watched, her generous mouth finally smiled.
Actually, it was more of a grin. Then, all at once, her face went blank and she recoiled slightly. Her eyes swept from his chest to the roots of his hair, with a darted glance at his features. He knew what she was seeing—blue eyes with cat-like pupils, ears that curved to a pointed tip, eyebrows that slanted upward toward his temples, and blond hair that hung in spiral curls to his waist. She wasn’t going to say it out loud, but the shock of recognition was clear; she knew precisely who he was and why he was there.
A nervous giggle escaped her. “Do you want to hear today’s specials?”
Tarq shook his head and smiled, drawing her attention to his fangs as he slowly licked his lips. “What would you recommend?”
Swallowing hard, she blurted out, “The fish.”
Nodding, Tarq exhaled with a loud purr. “Then I’ll have the fish.” Shifting his weight, he leaned back, shaking the hair back from his face. His d--k was starting to hurt and his balls were tingling like crazy. It had been three days since he’d had a woman. One more whiff of her and he’d probably lose all control.
She tapped his order into her notepad. Without looking up, she went on, “Baked, broiled, or grilled?”
“How do you like it, Lucy?” Tarq put as much seductive emphasis into those words as he possibly could—a question he’d asked countless women, but in a far different situation.
Still not taking her eyes off the pad, she said, “Um… grilled.”
“Then I’ll have it grilled.” Tarq let his own eyes roam over her round hips, ample breasts, and capable hands. She looked every bit as luscious as she smelled. A woman like that had to be mated already. Then he remembered the human custom of wearing rings on their left hand. He could see both of her hands clearly; there were no rings on either of them, but they were shaking.
“You get two sides with that.” There was a tremor in her voice; Tarq knew he was making her nervous, which was the very last thing he wanted to do. He wanted her relaxed and receptive.
“Why don’t you choose for me?” he suggested. “I don’t recognize any of them.”
“How about the Greek salad and eggplant with tomatoes and kalamata olives?”
“That sounds good.”
“And to drink?”
Tarq couldn’t say what he really wanted to drink; there were some things you didn’t say to a woman you’d only met a few moments before—unless she was a client, of course. “Water.”
“Anything else?”
Tarq had to bite his lip to keep from saying what was on the tip of his tongue, opting to reply with a shake of his head.
“I’ll be right back with your drink.”
Tarq smiled as he watched her go, her soft moccasins making no sound as she walked away. No wonder she had been able to sneak up on him like that. Tarq had excellent hearing—though his sense of smell was better—and there was nothing wrong with his eyesight, either. He’d lied when he said he didn’t recognize the side dishes; the truth was he couldn’t read the menu.