GUEST LAUNCH + GIVEAWAY: Deliver Me from Darkness by Tes Hilaire 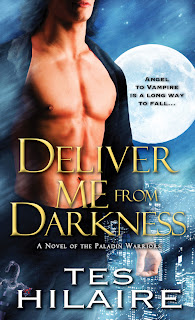 A Big CasaBabe welcome to fellow Sourcebooks Casablanca Author Tes Hilaire! Her debut romance novel, Deliver Me from Darkness, is now in stores and she's here to celebrate!

Teaser from Deliver Me from Darkness…
Karissa stepped forward, her brown eyes locking on his as she stared him down. “Oh, I don’t know. Maybe you drink because at one point in time, many a many years ago, you were human. Maybe you still remember the sweet sting of the alcohol hitting the back of your mouth, the spreading warmth as it burned in your belly, and the lazy waves of indifference that rolled in with it, demolishing all cares or worries. Maybe you were an alcoholic, or had the propensity to be one at least, and now, being what you are, and not being able to escape from it, you are instinctively succumbing to the addiction. In short. You are weak.”
“Weak.” The vile word rolled like a jagged stone in Roland’s mouth.
“That’s right.” Her mouth curled up in a saccharine smile, small white teeth flashing as she leaned closer into his personal space. “Weak.”
Weak indeed. If he had been a weak man, then every time he’d gone on the hunt he’d have let instincts overtake him and succumbed to the call of blood pumping through the veins of his prey. Just like a weak man, when faced with a friend’s request to harbor a young innocent who would tempt every aspect of his being, both vampire and Paladin, would have turned his back. If he was weak, he would have continued to deny what he already knew in his heart, in the hollow place that once held his soul: She was his mate. And if he was weak he would have used that as an excuse to take what he wanted from her, to claim something he had no right to claim.
He was not weak. At least, not completely. Though there were times when he faltered. Like now, looking down into those beautiful brown eyes that were trying to bore a hole in his head. Melted chocolate. He wanted to drink them in, the same as he wanted to taste the full strawberry pink lips that were currently pursed in smug challenge.
She probably didn’t even realize she had thrown down the gauntlet, probably thought she was being defiant, showing her strength by daring to get so close. Stupid woman. Hadn’t anyone ever told her not to play with fire? If her brown eyes were an addiction he could drown in and her lips an edible fruit, then her smooth skin was the fuel of his desire, her crisp floral scent the accelerant. An inch closer and they were both going to go up in flames.
One kiss. One taste. One moment.
He shouldn’t. She was too pure for him. She deserved more than a mate who could only offer her pain. More than a monster who would crave her blood as much as her companionship. He should turn his back on her now and get the hell away from here before he did something they’d both regret.
He shifted into her space.
Her head tipped back, hair slipping down her back, exposing her long neck and the pulse that flitted there. A hand came up as if to ward him off, but she stopped partway, hovering as if with indecision. He watched self-preservation war with something else…something that caused her lips to slacken into an openmouthed “oh” and the hand wavering between them to fall lightly upon his chest, curling into the soft material of his shirt.
A pulse of rosy-red fire licked at the soft white, pinks, purples, and yellows of her essence. Roland’s nostrils flared, scenting the concurrent change in her body chemistry: crisp lavender spiked with spicy musk.
She might not want to be, but she was aroused.
Hell.
Straws. Camels. Backs. Everyone had a point when they broke. Turns out his was his mate’s desire…
***

Whoa! (I fan my hand in front of my face) I don’t know about you ladies, but if I were Karissa, I think I’d be all kinds of okay with Roland’s ultimate weakness. I mean, he’s this hot, brooding, loner with these eyes that can just pin you where you stand and this body that I could just.. Eh-hem. (I turn my head to the side, blushing.) Okay. Sorry. That’s enough talking about how hot Roland is, because that’s not why I’m here. Well, not the only reason. I’m here for Deliver Me’s Launch Party! Whoot! I can’t tell how excited I am to be here today sharing this all with you. I mean, it’s finally here, the day before my first release. It’s been such a wild ride and…

(I jump a bit. Something starts beeping. I shift, reaching into my back jeans pocket and pull out my cell. Quickly I press a couple quick buttons to end the insistent noise.)

Excuse me. I jut need a second.

(I slide the phone open, texting quickly, then look back up and give a chagrined shrug of my shoulders as I tuck my phone away.)

Sorry, I normally don’t do that but it was Roland, and, well…he’s not too pleased with me right now. He just got out of his guest interview at Urban Girl and now he’s going on about invasion of privacy and exposure of the Paladin order blah, blah, blah… You know how these OCD vampires can be. Take them out of their comfort zone and it’s all glowy eyes and growls.

(I try for a smile, but curse as another string of beeps erupt from my back pocket. This time when I take out the phone I pointedly power it down.)

Anyway…Where were we?  Oh yeah. So tomorrow is the "official" release of Deliver Me from Darkness. I hope you liked the little teaser above.  If you did, and want to know more, well then I invite you to visit me as I continue on my blog tour. There will be all sorts of giveaways and chances to win! For a complete schedule, visit me at www.facebook.com/TesHilaireAuthor. There is a link to my blog schedule on the left, PLUS, if you like my author page, you’ll be entered to win one of my signed author copies of Deliver Me from Darkness!

Thanks so much for joining me and happy reading!

Thanks so much for joining us today, Tes! To be entered to win a copy of Deliver Me from Darkness, leave a comment below and tell us what your favorite kind of romance hero is... dark and mysterious like Roland? Funny, shy, tough? Be sure to leave an email address so we can reach you if you're one of the winners (US and Canada mailing addresses only).

DELIVER ME FROM DARKNESS BY TES HILAIRE – IN STORES FEBRUARY 2012 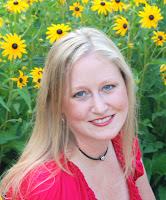 A STRANGER IN THE NIGHT...
He had once been a warrior of the Light, one of the revered Paladin. A protector. But now he lives in darkness, and the shadows are his sanctuary. Every day is a struggle to overcome the bloodlust. Especially the day Karissa shows up at his doorstep.

COMES KNOCKING ON THE DOOR…
She is light and bright and everything beautiful—despite her scratches and torn clothes. Every creature of the night is after her. So is every male Paladin. Because Karissa is the last female of their kind. But she is his. He may not have a soul, but he can't deny his heart.

ABOUT THE AUTHOR
Daphne Award-winning author Tes Hilaire started creating whole new worlds to escape upstate New York’s harsh winters before finally fleeing to sultry North Carolina. Her stories are edgy, exciting, and bring a hint of dark fantasy to paranormal romance. And no one ever has to shovel snow. For more, visit www.teshilaire.com.