By Shana February 03, 2012
There are two pages in every book I never skip, and those are the dedication and the acknowledgements. Often, even in a really awesome book, those pages are some of the most interesting. I like to know to whom the author has dedicated the book, and I like to know to whom they are grateful. Knowing those two things about an author also tells me a lot about them as a person. For example, it tells me who their friends are. Recently, I was thanked in the acknowledgements of my friend Ashley March's book Romancing the Countess. I have to tell you, it was fun to read the acknowledgements and see my name there!

Dedications often let me know what challenges authors faced when writing their books or who they are especially close to. I've dedicated books to my parents, my sister, my best friend, my critique partners, my daughter, and my husband. Last year my critique partner Tera Lynn Childs dedicated her young adult novel Sweet Venom to me. I was so honored and thrilled at the same time.

If you read the dedication for my new book, The Rogue Pirate's Bride, you'll probably wonder what was going on in my life at the time. The dedication reads: "For mothers, especially my mom Nancy and my mother-in-law Cheryl. How would I have done it without you?" I definitely couldn't have written my new book without both my mom and my mother-in-law. When I began the book I had a three-month-old newborn. I absolutely adored her, but she didn't sleep much, threw a fit every time I gave her a bottle (which was like ten times a day), and was basically one of the ten fussiest babies ever born.

I would never have have finished Bastien and Raeven's book if my mother hadn't stayed with me and cared for the baby for several weeks. And then my mother-in-law took afternoons off from work three days a week to help with my daughter for several months. Some days I didn't even write. Some days I just slept or enjoyed conversation with another adult.

I promise you when I finished the book I had no idea whether it was any good or not. I didn't even remember writing large chunks of it. But I have to say I was excited when I opened the page proofs months and months later--when my daughter had begun eating solids foods, sleeping through the night, and generally acting like a happy toddler--and read the following excerpt.

When the barkeep moved away, Percy studied his mug and murmured, “See the man in the far corner?”Raeven allowed her eyes to roam lazily over the tavern until she focused on the corner he meant.“He’s dressed as a gentleman—navy coat, white cravat, buff breeches.”She saw him now and nodded. “A gentleman pirate.” She shook her head. “Contradiction in terms.”“The rumor is he’s a deposed marquis whose family fled France during the revolution.”She scowled at him. “Don’t tell me you believe that rubbish. All the pirates concoct romantic stories. Just because one claims he’s a duke, doesn’t make him any less of a thief and murderer.”“Of course I don’t believe it. I’m telling you the rumor.”But she could hear in his voice he had believed the story, and now that she’d set her eyes on Cutlass, she could see why. The man did have the air of the aristocrat about him. It wasn’t simply his clothes—any man could dress up as one of the quality—but there was something in Cutlass’s bearing. He was sitting at a table, his back to the wall, facing the door to the tavern. That much told her he was no fool. There was a man seated across from him, and Cutlass was listening to whatever the man said in a leisurely fashion. Cutlass’s arms were crossed over his chest, and his expression was one of mild interest. He had a glass of something on the table before him, but she hadn’t seen him drink from it. Nor had she seen any whores approach him.He was doing business then. It would have better served her purposes if he’d been drunk and whoring, but she didn’t have the luxury of choosing when to strike.Her gaze slid back to Percy. “He’s handsome,” she remarked and watched the purser’s eyebrows wing upward. “I hadn’t expected that.”The reports she’d had of him rarely mentioned his appearance. Captain Cutlass was known for his stealth, his agility, and his slippery escapes. It was rumored he’d boarded over a hundred vessels. That was obviously exaggeration, but even if his record was a quarter of that, it was an impressive feat. Of course, he claimed he was a privateer, and she knew he sailed under the Spanish flag and with that country’s letters of marque. She didn’t care for privateers any more than she cared for pirates and made little distinction between them. Neither pirates nor privateers should dare attack ships of the British Navy. Neither should dare to kill a British naval officer.She felt the anger and the blood pump through her and took a deep, calming breath. She couldn’t afford to be emotional right now. She had to put emotion away. And she couldn’t afford a schoolgirl crush on the man either. Yes, he was handsome. His dark brown hair brushed back from his forehead and would have grazed his shoulder if not neatly secured in a queue. His face was strong with a square jaw, plenty of angles and planes, and a full mouth that destroyed the hard effect and hinted at softness. But the eyes—the eyes did not lie. There was no softness in the man. She couldn’t quite see the eye color from this far away—it was something light—but under the sardonic arch of his brow his eyes were sharp, cold, and calculating.A worthy adversary, and she’d spill his blood tonight. 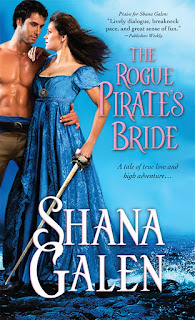 I knew the book was going to be fun! I hope you'll agree, and if you're looking for an entertaining read to help you forget laundry, dishes, crying babies, or even the overflowing trash bin your husband forgot to take out, give The Rogue Pirate's Bride a try. I promise you, Bastien would never forget to take out the trash.

Anything a good book could help you forget today? I've got some bills I'd like to forget about.