BIGGER THAN THE TWO OF US by Emery Lee

By Emery Lee February 11, 2012
As a romance writer there is one (alright maybe many) hard and fast rule that one must live by—at the end of the 80-100,000 tirelessly scribed words which might involve any combination of hero and heroine archetypes in myriad plot devices, there MUST be a happy ever after. This is as carved in stone as the tablets of Moses.  End. Of. Story.


However, as a reader, I am never more stirred to depths of my being than by the sheer poignancy of sacrificial and even tragic love stories. You know, the kind that make you ransack the entire house for a box of Kleenex. And while my poor little heart can only stand this much emotion once in a blue moon, here is my own list of five of the most tragically romantic couples in history and mythology. Immortalized by "the bard" is the true love story of Antony and Cleopatra derived from  Plutarch's "Life of Mark Antony"  We join his story as Cleopatra receives Antony's summons to join him:


"She had faith in her own attractions, which, having formerly recommended her to Caesar and the young Pompey, she did not doubt might prove yet more successful with Antony... she was to meet Antony in the time of life when women's beauty is most splendid, and their intellects are in full maturity. She made great preparations for her journey, of money, gifts, and ornaments of value, such as so wealthy a kingdom might afford, but she brought with her surest hopes in her own magic arts and charms. ...she came sailing up the river Cydnus in a barge with gilded stern and outspread sails of purple, while oars of silver beat time to the music of flutes and fifes and harps. She herself lay all along, under a canopy of cloth of gold, dressed as Venus in a picture, and beautiful young boys, like painted Cupids, stood on each side to fan her. "


In a case of love at first site, the couple was inseparable: "She played at dice with him, drank with him, hunted with him; and when he exercised in arms, she was there to see."


The relationship between these two powerful people put the country of Egypt in a powerful position and their love affair outraged the Romans. Despite all, Anthony and Cleopatra wed. In the most popular version, while fighting against the Romans, Antony is led to believe Cleopatra has betrayed him and he falls on his sword. When Cleopatra learns of his death, she commits suicide believing they will be reunited in the afterlife. 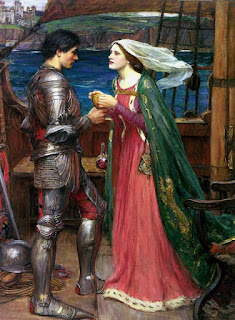 This tragic love story has been told and retold through various stories and manuscripts and served as inspiration for the Arthur/ Lancelot/Guinevere love triangle in Thomas Mallory's Morte D'Arthur.


Isolde (also Iseult) was the daughter of the King of Ireland and betrothed to King Mark of Cornwall.  When King Mark sends his nephew, Tristan to escort his bride, the young couple falls helplessly in love. Though her marriage to the king  proceeds, the love affair continues.  Upon King Mark's discovery of the betrayal there are a number of variations on the lover's fates, but all end with Tristan dying of grief, thinking Isolde betrayed him, and Isolde dying in a swoon over his corpse. 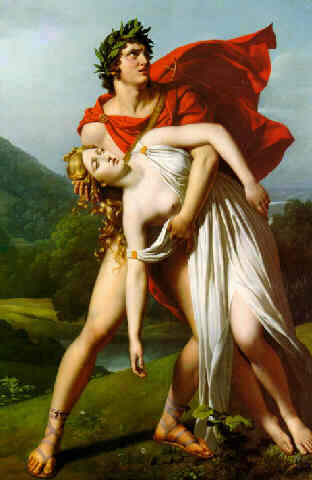 Orpheus and Eurydice story is an ancient Greek tale of desperate love. Orpheus was the son of one of the Muses and a Thracian prince whose mother gave him the gift of music. Although the Thracians were the most musical of all Greeks, Orpheus had no rival but the gods alone. No one and nothing could resist him. Everything animate and inanimate followed him. He moved the rocks on the hillside and turned the courses of the rivers....


In the deep still woods upon the Thracian mountains
Orpheus with his singing lyre led the trees,
Led the wild beasts of the wilderness.


Orpheus falls deeply in love with Eurydice, a beautiful nymph but the god  Aristaeus also desires her.  While fleeing from Aristaeus, Eurydice runs into a nest of snakes and is fatally bitten. In an anguish of grief, Orpheus is determined to retrieve her back from death and undertakes a perilous journey to the underworld. "with my song I will charm Demeter's daughter, I will charm the Lord of the Dead, Moving their hearts with my melody. I will bear her away from Hades." Upon striking his lyre : "He Drew iron tears down Pluto's cheek, and made Hell grant what Love did seek."


Charmed by his music, Hades and Persephone summon Eurydice and give her back to him upon the condition that he not look back at her as she follows him into the upper world. As he steps joyfully into the daylight, he looks back to ensure she still follows but it is too soon. She fades back into the darkness with the faint word, "Farewell." In utter desolation Orpheus forsakes all men to wander the wild solitudes of Thrace, comfortless except for his lyre.

This true tale of ill-fated lovers was made famous by Dante's "Divine Comedy."
Francesca da Rimini or Francesca da Polenta (1255–1285) was the daughter of Guido da Polenta, lord of Ravenna who had been at war with the Malatesta family.  As part of a peace negotiation, Guido offers his daughter Francesca to the Malatestan heir, Giovanni Malatesta(Gianciotto), son of Malatesta da Verucchio, lord of Rimini. Giovanni was brave but deformed and knowing his daughter would refuse, the nuptials proceed by proxy through Giovanni's handsome brother, Paolo.


Francesca falls in love with Paolo, unaware of the deception until the morning after the wedding. According to Dante, Francesca and Paolo became lovers after reading the story of Lancelot and Guinevere. When the two lovers are discovered they are murdered by Gianciotto.

"You know, beloved, as the whole world knows, how much I have lost in you, how at one wretched stroke of fortune that supreme act of flagrant treachery robbed me of my very self in robbing me of you; and how my sorrow for my loss is nothing compared with what I feel for the manner in which I lost you." -Heloise to Abelard


Peter Abelard (1079-1142) was a French philosopher, considered one of the greatest thinkers of the 12th century. Heloise (1101-1164) was the niece and pride of Canon Fulbert. She was well-educated by her uncle in Paris.


"Her uncle's love for her was equaled only by his desire that she should have the best education which he could possibly procure for her. Of no mean beauty, she stood out above all by reason of her abundant knowledge of letters." -Abelarde speaking of Heloise


In twelfth century Paris, the intellectually gifted young Heloise, the niece of Notre Dame’s Canon Fulbert, strives for knowledge, truth and the answer to the question of human existence. Abelard is deemed the only teacher in Paris to provide the education that she seeks. Though twenty years her senior, Abelard is completely enamored by Heloise for she is not only beautiful but his intellectual equal. Theirs is a passion impossible to resist. They become so spiritually and intellectually entwined that neither can defy their physical desires.

When Heloise becomes pregnant, they flee for Brittany, Abelard’s place of birth.  Though the couple are secretly wed, they discover Fulbert’s plot to ruin Abelard and keep Heloise for himself. Heloise escapes to the convent at Argenteuil but Fulbert has his servants castrate Abelard while he sleeps. Knowing they can never again be together, Abelard becomes a monk and devotes his life to learning. The heartbroken Heloise becomes a nun. Despite their separations and tribulations, Abelard and Heloise remain in love. Six hundred years later Josephine Bonaparte was so moved by their story that she ordered their remains to be entombed together at Pére Lachaise cemetery in Paris. Although they were forever parted in life, their poignant love letters survive the centuries.