By Catherine Mann January 21, 2012
Happy New Year, everyone! Our January blog theme of new beginnings immediately made me think of my next "Elite Force" book coming out in May - UNDER FIRE. While I've posted an excerpt from chapter one of UNDER FIRE in a previous blog, I have not yet posted THE beginning of the book. This blog presents the perfect opportunity! 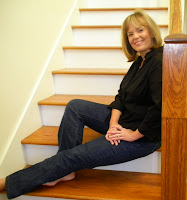 For those of you who have not yet read my "Elite Force" books, they feature Air Force pararescue jumpers (PJs.) There are only approximately 350 pararescuemen in the world, and they're trained for high risk rescues, military and civilian. Land. Water. Mountains. They can hold off an opposing force if needed and stabilize a wounded individual while waiting for transport out. 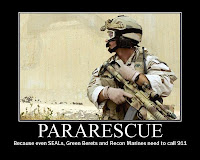 Major Liam McCabe almost choked on a gulp of the Atlantic as his pararescue teammate’s words floated across the waves. Today’s two-mile swim was pushing toward an hour long. A light rain pocked the surface faster by the second. Still, there was no reason to think one of his guys had gone batty.

Liam sliced an arm through the choppy ocean, looking to the side. “Wanna run that by me again, Cuervo?”

Jose “Cuervo” James swam next to him, phrases coming in bursts as his face cleared the water. “It’s a word game. Kill one. Screw one. Marry one. Somebody names three women…” Swim. Breathe. “And you have to pick.” Swim. Breathe. “One to marry. One to kill. One to--”

He would have sighed and shook his head except for the whole drowning thing. At moments such as these, he felt like a stodgy old guy more than ever.

“So, Major?” Cuervo stroked along and over the rippling waves. Storm clouds brewed overhead. “Are you in?”

On monotonous swims or runs, they’d shot the breeze plenty of times to take their minds off screaming muscles. The distraction was particularly welcome during intense physical training.

This word game, however, was a first.

A quick glance reassured him the other six team members were keeping pace with him and Cuervo. Each held strong, powering toward the beach still a quarter of a mile away.

Feet pumping his fins, Liam shifted his attention back on the “game.” His body burned from the effort, but he had plenty of steam left inside to finish up. He was their team leader. Their commanding officer. He would not fall behind.

“How about I just listen first?” Water flowed over his body, briny, chilly. Familiar. “Let one of the others start off.”

“Sure, old man,” huffed Cuervo, spewing a mouthful to the side. “If you need to save your breath to keep pace. Okay, Fang, you’re up.”

Fang, the youngest of the group and the one most eager to fit in, arced his arms faster to pull up alongside. “Bring it on.”

“Jennifer’s hot,” Fang spewed water with his speedy answer. “I would do her in a heartbeat.”

Liam found an answer falling from his mouth after all. “I’d marry Angie.”

“Too easy.” Cuervo snorted. “You’ve been married three times, Major, so that’s not saying much for Angie.”
Which just left… Poor Gwyneth.

But then he’d always had a thing for brunettes. And redheads. And blondes. Hell, he loved women. But he really loved brunettes. One brunette in particular, the one he hadn’t married or slept with or even made it past first base, for God’s sake.

Focus on the swim. The team.

The damn game. “Cuervo, are we playing this or not?”

“Are you sure you’re not too old for this job?”

“Still young enough to out swim you, baby boy.” Liam surged ahead of Cuervo. Swims were a lot easier on his abused knees than parachute landings or runs. But a pararescueman needed to be ready for anything, anywhere. Any weather.

Thunder rolled liked a bowling ball gaining speed and his teammates were the pins.

All games aside, this little dip in the rain was about more than a simple training exercise. More than team building. He needed his pararescuemen in top form for a mission they usually didn’t handle - the external security for an upcoming international summit being held at NASA. Not normal business for pararescuemen, but well within their skill set to act as a quick reaction force if anything went down. After all isn’t that what a rescue was? A quick reaction to something going down? Trained and prepared to fight back enemy combatant forces if necessary to protect their rescue target.

This made for a tough last assignment. His final hoo-uh, ooh-rah before he said goodbye to military life. Since he was eleven years old watching vintage war movies on a VCR with his cancer-stricken mama, all he’d wanted was to be that man who took the hill and won the woman. His mother had lost her battle. But Liam had been determined to carry on the fight by putting on that uniform.

Damned if he would go out with a whimper.

Fang slapped the water. “Can we get back to the fuck-me game?”

“Hey,” Wade Rocha’s voice rumbled as deeply as the thunder, “no need to make this crude.”

Fang chuckled and spluttered. “Not hardly. Monogamy until I’m in the grave?” He shuddered. “No thanks. Not into that.”

He’d tried his ass off to make the happily ever after thing work. Tried three times, in fact. Problem was he had a defective cog when it came to choosing a woman to spend his life with. Didn’t help that he’d always put the mission first, something that hadn’t sat well with any of his wives. A small fortune spent on marital counseling hadn’t been able to fix the relationships or him.

And still, he couldn’t get that one woman – that one brunette - out of his mind no matter how many times he chanted: old patterns, not real, get over her.

He was a romantic sap who fell in love too easily. He kept looking for that classic movie, silver screen ending. Guy gets girl. Roll credits.

If only he could have persuaded Rachel Flores to go out with him once they’d returned to the States. They’d worked together rescuing earthquake victims in the Bahamas six months ago. Had become good friends, or so he’d thought. After they got back, she never returned his calls.

Sure, if they had dated, the relationship would have self-destructed like all the rest. Then he could have walked away free and clear, no regrets, no lengthy explicit dreams that woke him up hard and unsatisfied. Now, he was stuck with images of Rachel rattling around in his noggin until he wouldn’t even notice another woman waiting on the beach ahead wearing nothing but body glitter and a do-me smile.

Except there wasn’t anyone on the beach. Just a stretch of sand and trees and a five mile hike waiting to set his knees on fire after they hit the shore.

His life had been about training and service since he’d joined the Army at eighteen. Became a ranger. Then got his degree while serving, became an officer and swapped to the Air Force and pararescue missions.

He’d sacrificed three marriages and any social life for this and would have kept right on doing so. Except now his thirty-eight year old body was becoming a liability to those around him.

One week. He had one week and a big ass demonstration left. Until then he would do his damnedest to keep his team focused and invincible. He wasn’t going to spend another second fantasizing about a particular sexy spitfire brunette with as much grit as his elite force team.

Liam narrowed his eyes against the sting of salt and the pounding rain pushing through the surface like bullets. “I’ve got a new game, gentlemen. It’s called ‘Pick Your Poison.’” Stroke. Breathe. “If you’ve gotta die in the water…” Stroke. Breathe. “Would you choose a water moccasin? An alligator? Or a shark?”***

QUESTION: If you were playing the game of famous person "marry one - screw one - kill one" - who's your famous secret crush?