SINS OF THE HIGHLANDER Excerpt

I finally have a free hour in my New Year Blog Bash to celebrate the release of SINS OF THE HIGHLANDER. I though I'd use it to share the opening of the story: 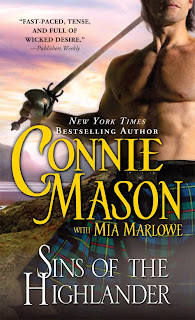 The peat fire had burned out and the ash gone gray, but Rob MacLaren didn’t feel the least bit cold. Not while his hot-blooded woman writhed under him. Their breaths mingled in the frosty air of the bedchamber. Fiona tilted her hips, welcoming him deeper, and he bit the inside of his cheek to keep from emptying himself into her.
It was too soon.
He never wanted it to end, this joining, this loss of himself in the woman he adored.
Rob raised himself up on his arms and gazed down at her. The candles had burned down to nubs but still flickered enough to cast her in soft light. He could see his wife clearly.
“What are ye doing, daftie man? ‘Tis too cold!” Fiona raised herself up and clung to him for warmth.
“That’s what ye get when ye marry a man on Christmas Day—a cold bridal night.” He gently pushed her back down and she sank into the feather tick.
“It doesna have to be cold.” Her skin rippled with gooseflesh. “Come back under the covers, love.”
“I canna. I need to see the lass I wed,” he said. “I want to watch ye melt for me, to see your face when ye make that wee kitten noise just afore ye come.”
“Wee kitten noise, is it?” She shook with laughter. “Have a care, husband, lest I bare my claws.”
She raked her nails across his chest and the sensation made his balls clench.
He lowered himself and kissed her, devouring her lips and chasing her tongue. He withdrew for a heartbeat for the sheer joy of sliding slowly back into her slick wetness. Then he raised himself again and reached between them to stroke her over the edge.
“Oh, Rob.” Her inner walls clenched around him and he felt the soft tremor that signaled the start of her release. “When ye do that, I don’t care a fig if it’s so cold I catch my death . . . my death . . . my death . . .”
Her voice echoed round the chamber and faded into the distant thatch overhead.
Rob jerked awake.
He wasn’t in his bridal bedchamber. He was lying on stone hard ground still primed to make love to the woman in his dream. Stars wheeled above him in a frigid sky. His band of men snored nearby.
And the fact that Fiona was dead slammed into him afresh.
He’d married her two years ago at Christmas and she’d been gone by Epiphany. Twelve days, he’d been a husband. Only twelve.
And now a night didn’t pass without his wife visiting him as some phantom, sometimes tender, sometimes terrifying. She lived in his dreams, but always he was powerless to hold her to earth.
She was so vibrant, so real by night, he suffered all the more in the waking world with the knowledge that he’d not find her there.
One of the men in the clearing let out a loud snore and mumbled in his sleep. It was hours till dawn and even more till Rob could accomplish what he intended in the coming day. But he would not seek sleep.
He couldn’t bear to lose Fiona again so soon.
_______________________________

Hope you enjoyed the snippet of SINS OF THE HIGHLANDER. If you'd like to read more of the first chapter, visit my website. While you're there be sure to enter my website contest for a chance to win a KINDLE!
Leave a comment here and you'll be entered in a drawing for winner's choice from my backlist!