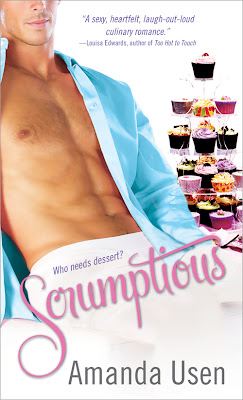 Please give a warm Casablanca welcome to Amanda Usen, whose new contemporary romance, with a foodie twist, SCRUMPTIOUS, is now in stores!

Cupcakes and man candy! Hot chefs in love! When you mix a traveling chef-for-hire with a love ‘em and leave ‘em pastry chef, the result is…SCRUMPTIOUS!

Joe Rafferty is just as mouthwatering as the food he cooks. But if he thinks he's going to waltz in and take over her kitchen, he's denser than a thick slice of chocolate ripple cheesecake. Marly has invested too much of her life in Chameleon to hand off the restaurant to someone else—especially a cocky-as-all-get-out superstar chef. But there's no denying the man knows how to light her fire. Question is: Can she have the sizzle without feeling the burn?

Food is my love language. I met my husband in culinary school, so it’s no wonder that I write about chefs and food…and love. I gave Joe a little piece of every hot chef I’ve ever encountered in my cooking travels– ice-blue eyes, to-die-for shoulders, asbestos hands and the bad boy arrogance I love to see in a kitchen. In Marly, I created a fiery woman who can keep up with him – on the line and everywhere else. Sparks fly when these two share the stove…

With every other egg she cracked, her mind returned to Joe. She hadn’t given this much thought to a man since, well, her father didn’t count, so never.

Joe Rafferty did not want her. No big deal. No problem. Plenty of other guys did. Like Danny for example. He’d been more than willing to stay with her instead of playing poker last night. She didn’t need Joe.

Unfortunately, the tiny little traitor that lived somewhere between her heart and her brain wanted to show Joe what he was missing. That inner turncoat was fluffing her hair, checking her makeup, and picking out scandalous lingerie. Oh yeah, and another part of her wanted to show him he wasn’t God’s gift to the kitchen. Especially her kitchen. That part of her was sharpening her knives. By hand.

Marlene poured egg yolks and sugar into the small bowl of her heavy-duty KitchenAid mixer on the counter. She stirred and scraped once, just to keep the yolks from burning, then secured the whip and let it rip. She turned around to pour egg whites into the bowl of her twenty-quart Hobart stand mixer and began whipping them at medium speed, wrinkling her nose as the egg white smell of wet dog rose from the stainless steel bowl.

“You always come in this early on Saturday?” Joe asked from the doorway.

Marlene looked up for a moment, just long enough to catch an eyeful of his broad chest and the swirl of dark hair peeking out of the collar of his T-shirt as he buttoned his chef coat. A sharp flash of lust arced through her belly, quickly chased by irritation. Not interested, she reminded herself. She began to add sugar, tablespoon by tablespoon, to the meringue. “I can’t stay late tonight, so I wanted to get my desserts prepped and my specials done early.” Samson had been known to misbehave when left alone too long.

Inner traitor giggled. “As a matter of fact, I do.” Sam would share her dinner and her bed—that counted as a date in her book.

“Leaving early shouldn’t be a problem,” Joe said, making it sound as if he was giving her permission.
She gritted her teeth and added the last tablespoon of sugar to her meringue.

“Got a minute to go over the prep list?” he asked.

Marlene bumped up the speed on the mixer. “Sorry, my nice, fluffy egg whites aren’t going to hang around while we chat. Just write it down. I’ll get it done.”

She folded the ground almonds into the yolks, and took her time folding in the whites, gently bringing the denser nut and yolk mixture up from the bottom of the bowl. She would not take her irritation out on her delicate sponge cakes. Just before the streaks of egg white disappeared, she divided the batter among six half-sheet pans and encouraged the bubbly batter toward the edges of each. She slid them into the deck ovens and shut the heavy door with care before she turned to face him.

“Now, what were you saying?” God, it was completely unfair that he was so attractive. She should not want to kiss a man who made her nuttier than the almonds in her cakes.

“Olivia wants to know if you have time to make the garlic mashed potatoes and white beans. She soaked the beans last night. We also need pesto, chimichurri, chipotle sauce, and onions and peppers, got that?” Joe asked.

“I’ll get right on it. Anything else, Chef?”

He cocked his head to the side. “You make the word chef sound like an insult. You have something against chefs?” he asked, leaning a solid shoulder against her reach-in, blocking her in the bakeshop.

“Absolutely not, Chef,” she repeated. “Just doing my job.”

“Uh-huh,” he said with a sardonic grin. “Which job? Pastry chef? Prep cook? Troublemaker?” Joe pushed away from reach-in and began to walk toward her. She swallowed, resisting the urge to step back.

“All of the above.” She lifted her chin and met his eyes, hoping he couldn’t read the bluff in hers. She wasn’t going to cause any more trouble. She just wanted her real job back, which unfortunately happened to be his job at the moment.

Joe stopped right in front of her. His blue eyes went gray, like an ice storm. “You don’t have any other nasty little tricks planned for me during service, do you, sugar? Because if you do, neither one of us will be laughing this time. I’ll turn you over my knee and give you the paddling you deserve.”

“Well, that would be something new.” She gave him a tight-lipped smile. He was so close that his breath feathered over her face and another lightning strike of simple, straight-up lust hit her in the gut.

His eyes dropped to her mouth, and she saw a muscle in his jaw twitch. Maybe he wasn’t unaffected by the tension that charged the air between them. Frustration, pure and simple, made her crave some sort of satisfaction, and inner traitor wanted to remind Joe what he was missing. She reached out to smooth the cotton of his chef coat across the expanding width of his chest. “I don’t need dirty tricks to take down a schoolboy like you,” she said.

“You don’t, huh?” His deep voice rumbled quietly in his chest. “What do you need?”

“Not a thing.” Her palm slid over his firm muscles, caressed the warm column of his neck, and finally felt the rasp of his shadowed cheek. It did make a sound. She drew his face down to hers.

“Just this,” she whispered against his lips.

For a chance to win Scrumptious, please comment below. I’d love to hear about your favorite food memory! Lord knows I still dream about the pecan Danish we used to make at my first bakery job in Nashville, TN at Provence Breads and Café. The dough was made in-house, shaped into a cinnamon-y spiral, filled with a smear of butter and brown sugar, then sprinkled with chopped pecans. When the Danish came out of the oven, it was my job to slather them with heavenly apricot glaze. I ate one warm every Saturday and Sunday morning for at least a year. Sweet and toasty. Unforgettable. 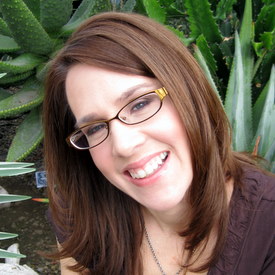 For more information about me or my books, please visit http://www.amandausen.com

Happy New Year and thanks for celebrating with me today!

Amanda - thanks so much for visiting with us! Like Amanda said, we're giving away copies of Scrumptious today: 2 COPIES! Please share your food memory in the comments for a chance to win. US and Canada addresses only, and please leave an email address so we can contact the winners, who will be announced on Monday, January 9.