Dreaming of the Wolf

Dreams feature prominently in SINS OF THE HIGHLANDER. It even  starts with a dream--one from which our hero, Rob MacLaren doesn't want to wake. Once he returns to the world of light, he has to face a life without the woman of his dreams, his dead wife Fiona.

Terry Spear: Having wolves (werewolves, that is) in your life in the New Year is a plus. Why? 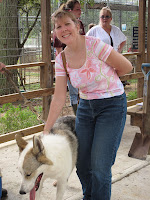 They’re protective, loyal, loving, take care of each pack member’s cubs as if they were their own, sexy, hot, hunky, well, what more can you ask for in the New Year? I admit they’re wolf shifters, which can get a little hairy at times when they’re trying to keep their identity secret. And they do seem to get into more than their share of trouble. But if you’re going to get into a pickle of a mess, being with a wolf of a guy, and his pack, evens up the odds in your favor. Even if the electricity’s on the blink during a blizzard, you’ll have no worry about keeping warm, not with a wolfish kind of guy there to help out. Did I mention how playful they are? Swimming in the Grand Cayman Islands, or a chilly lake in Oregon, playing tag, you name it, either solo or playing with the pack is part of being in a wolf pack. But it doesn’t stop there! A new jaguar shifter series, starting with Savage Hunger, will be released in the fall. Jaguars are just as curious and playful as wolves, but of course they’ll be a lot different too.

So if you like big kitty cats that are just as protective as their wolf counterparts, you might want to check them out also! Will there be cat and dog fights? Hmm. I have to say for now, neither believe the other exist—they’re merely fantasy.

Hope you all have a super wonderful New Years! I’ll be at Outback Steakhouse, pretending to be in the wilds of Australia, enjoying a wolf/jaguar-loving steak and of course spicy wings! Happy New Years! Oh, and would YOU like a wolf/jaguar (not the car, lol) for the New Years? 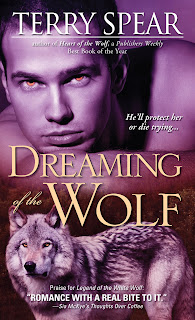 Author bio: Award-winning author Terry Spear is the author of urban fantasy romances and medieval Highland romances. She received Publishers Weekly's Best Book of the Year in 2008 for Heart of the Wolf. A retired officer of the U.S. Army Reserves, Terry is a librarian by day. She lives in Crawford, Texas.

Mia: Happy New Year to you too, Terry!

If you want to claim a DREAMING OF THE WOLF for yourself, go to your local bookseller or Amazon or B&N.com . One lucky commenter will win theirs, but why take chances?

I'll also be picking a winner who'll choose a title from my backlist.

Dreaming of the Wolf giveaway