The Healing Power of a Fuzzy Face by C.H. Admirand 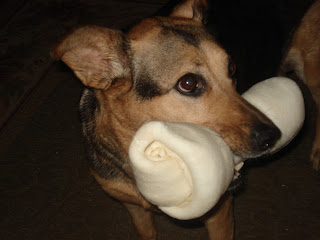 There is always a flurry of activity the weekend before Christmas because that’s when I usually bake…except for this year. This year I had a double-deadline (A WEDDING IN PURITY due on December 15th and copyedits for JESSE due on December 20th) I knew it was going to be a tight squeeze to get everything in. I turned in AWIP on time, but then the unexpected happened, our darling dog Ginger woke up on the 16th and we knew something was definitely wrong with her. 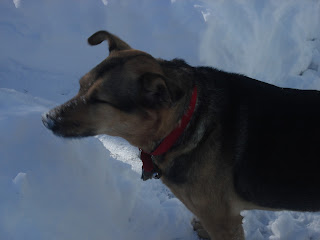 Our oldest son carried her to the truck for me and he followed in his car. Looking into Ginger’s sweet face with her Cleopatra eyes, I could see that she was in pain and knew that she wanted me to fix it. My heart broke because I knew I couldn’t. The Vet showed us her x-ray and explained that our dog had a cancerous mass that burst—she was bleeding internally—and there was nothing they could do, except ease her suffering. How do you say goodbye to a faithful friend after 12 years? My husband, our oldest son, and I were with her when she passed. The aftermath was like a huge black vortex sucking us down into the darkness. I knew she was going to be the last dog we ever had, how could we even think that another dog
would take her place? 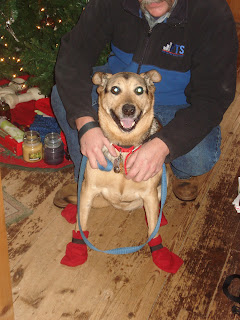 Saturday morning our youngest son was frying an omelet and stopped and looked at me asking, “Who’s going to eat the extra egg that doesn’t fit in the pan?” I had just eaten a piece of bacon—except for the fatty part on the end, I always saved that for Ginger—and just stared at it. When I started crying my husband grabbed the piece of fat and ate it. After finishing his coffee, my hubby got up and opened the closet reaching for Ginger’s leash before he stopped, looked at us and put the leash back and sat down.

I was working on my copyedits and switched screens and Googled animal shelters in our area. As our oldest son walked in for breakfast, I had the info, aside from the one in town where we adopted Ginger 12 years before, there were two really close by. I finished my tea and told my guys I was going to the shelter and before I could ask the room was suddenly charged with positive energy and my guys were united with one thought in mind: rescuing another dog. They were ready to leave before I could grab my sweatshirt. 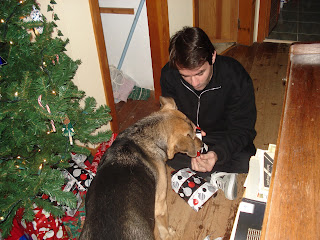 I was waiting for the one dog to look at me and silently ask me to take him or her home—the same way Ginger had. Ginger had been a Christmas puppy before she’d been given to the shelter.  She never really liked when we put up the tree, but she came to accept it and really loved opening her presents with her little weasel teeth.   We went to two shelters on Saturday. The last one on Sunday. We saw all of the dogs except the one being walked. When they brought her back, I didn’t even see her face at first—I couldn’t get past the fact that she was the skinniest dog I’d ever seen. 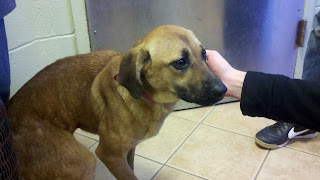 Her ribs were showing and her hip bones and shoulder bones were protruding from her too-thin body. I knew then that no matter what, we’d be rescuing that poor little dog.  Josie is tan with two tiny black eyebrows, a black beauty mark on her cheek and a black muzzle. The shelter had her down as a Shepherd Mix, but we’re thinking there might be hound in her. Josie’s story is so sad—she was born in a shelter in New York State, and was transferred to one in New Jersey—she’s never lived outside of a cage in a shelter. Once we heard her story, we knew she needed a chance at her forever home—just like we’d given to Ginger. 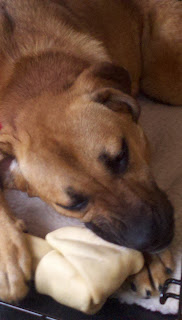 Josie is settling down in her new home. She’s skittish and still shies away if we move too suddenly. She’s eating like a starving wolf, but is starting to put some meat on her bones. She still prefers to sit in her cage with the door open and watch us, but is venturing out more and more exploring her new domain. I write in the kitchen (my office is still a mess) and she follows me whenever I’m gone for more than a few minutes. While Josie will never replace Ginger, there is enough room in our hearts to love another dog.

So this Christmas I already have everything that I need: a loving family and a puppy under our Christmas tree who is slowly healing the ache in our grief-filled hearts.