When will you make an end? 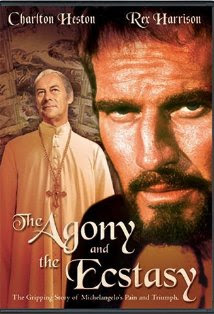 If you've ever seen The Agony and the Ecstasy, you know the answer Michelangelo gives to Pope Julius II's question.

"When I am finished."

But is anything ever truly finished, or is it simply abandoned?

Endings have been on all of our minds here at Casablanca this month, but for every ending, there is a new beginning. My horoscope has been consistently telling me that a new career move is in the works. That I will leave one profession behind to seek another. But I doubt that it will happen all in one day. At some point, I'll either decide to quit nursing or quit writing because it has been very difficult to do both, but I won't do it just because the stars say I should.

Changes are progressive, and the really big decisions are often made for us. Someone hires us, fires us, lays us off, or buys our book. We can put ourselves out there, but what makes or breaks us is mostly out of our hands. We can write the best book we possibly can, but if no one knows to buy it, its fate is sealed. If it is well-promoted and reviewed, we stand a better chance, but still, the decision is with the buyer and ultimately, the reader.

I don't like to write "THE END" when I come to a story's close, because it really isn't an end. It's the part where we assume that our characters will live on--or not--and what happens is left to our imagination. Did you read Gone With the Wind and believe that Scarlett would get Rhett back? I never did. I thought the break was too complete, but I didn't mind because I knew that with or without one another, they would live out their lives, sometimes happily and sometimes not, but that there was another story beyond the point where the author decided to stop.

I once read a book that was quite lengthy and followed the lives of a group of women. It was a popular book, and I believe was given to me as a gift. I read it and kept waiting for the climax of the story, but there wasn't one. Books that chronicle entire lives have too many ups and downs, and the happily ever after isn't left to the imagination. I find that very boring, unless the book is an autobiography, and, generally speaking, most of those are completed prior to the author's death.

What I'm trying to say here, is that I'd rather not have the ending spelled out for me. I need the tiniest opportunity to say, "But what if...?"