Abundant Love Through the Years

Today, my husband’s grandmother turns 90! Certainly that in and of itself qualifies for our September theme of abundance in years. I would also say Mamaw quantifies a person who treasures up and shares love in abundance. 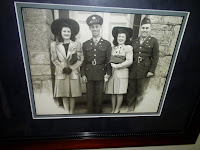 As a romance writer, I’m always fascinated by the many forms happily ever after can take. Today, I would like to celebrate the abundant romance of my husband’s grandparents - Mamaw and Buster.

The framed photo shows that they obviously dated and married during the WWII era. The photo was taken on their wedding day (they’re the couple in the middle.) Months later, Buster shipped out just after Mamaw learned she was pregnant with their first child, my future father-in-law. She gave birth without Buster there. During the Battle of the Bulge, Buster was shot three times and was reported dead. Later, she learned he was in a prison camp where he stayed for the duration of the war. She told me once how she learned from that experience to treasure the abundance of the moment, of the simple things in life.

Now, family members who know Buster and Mamaw, also know they could and often did grouse at each other. But I still saw the abundance of their love in those unspoken moments. I saw it in the way Mamaw quietly made sure he had warm wool socks because his feet were sensitive to cold since they’d frozen during his train ride to the prison camp. I saw that love in Buster’s face when he gave up living on his family farm in their senior years so she could be nearer to their three sons. 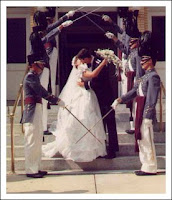 Mamaw and Buster celebrated sixty-five years of marriage before he passed away last year. Those sixty-five years of abundantly lived moments expanded even further, encompassing all of us around them. Including my twenty-three year marriage to my own military hero hubby. (See photo from our wedding day.) Whether we drove down the winding road leading to their farm home or walked up the steps to their tiny apartment, we knew we were entering a circle of unconditional, abundant love that lives on.

In the spirit of living each moment abundantly, what are some unspoken ways you’ve been shown love or seek to show love for others through simple gestures? In the novels I read, I find great reassurance in seeing these played out with the hero and heroine so I can envision their abundant happily ever after lasting a lifetime!

To learn more about my books and my upcoming Casablanca debut, COVER ME, check out my website at: http://catherinemann.com/