The Pursuit of Happiness

We hold these truths to be self-evident,
that all men are created equal,
that they are endowed by their Creator
with certain unalienable Rights,
that among these are Life, Liberty and the pursuit of Happiness. 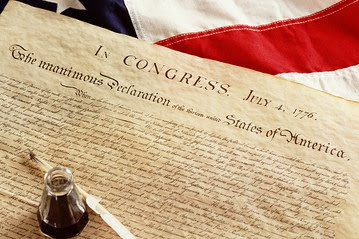 Every American school child is required to memorize these lines penned by Thomas Jefferson in the Declaration of Independence. I remember agonizing over them, practicing endlessly so that I could stand before the class and say them aloud. We had to get every syllable correct or we would fail our government class and then – gasp – not graduate! Oh the pressure!

Shaking in a cold-sweat terror of nervousness I remember, but I don’t remember the nitty-gritty analysis of what these words actually mean. Do you? I am sure we did study the history but over time we develop our own concepts of “liberty” and “life” and that tricky one: “the pursuit of happiness.”

As I thought about what brings me happiness for this month’s blog theme, it was easy to make a list. Yet I found myself wondering what Mr. Jefferson and our Founding Fathers meant by it. Assuming – rightfully so, I believe – that the authors were extremely careful in their word choices, asking, “Why was that phrase in there?” is valid. Obviously when you are talking politics and matters touching on morals and ethics, the analysis will be widely varied. I discovered some of this when I did a quick Google search! Yet for all the divergent slants on the topic and history behind the phrase, the consensus was clear if one honestly and without bias delves into what we know of these men, especially Jefferson. 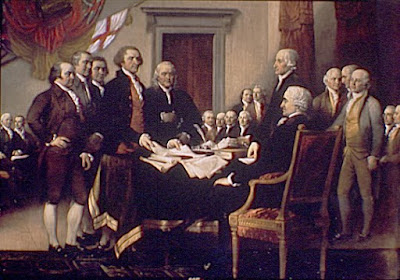 Jefferson, Adams, and the others were not the first to conceive of these ideas. In fact, Adams teasingly complained that Jefferson had written nothing new, to which Jefferson wholly agreed. A two-second glance at the before-the-Revolution writings of our FFs will reveal that they shared these philosophies and expounded on them often, liberally quoting previous writers. Numerous philosophers and political movers wrote of and fought for these concepts, including Aristotle, Epicurus, Dr. Samuel Johnson, and Adam Smith, just to name a few. Yet there is zero argument that the greatest influence on Jefferson came from the 17th century philosopher John Locke. (Not the guy from Lost- hehe!) 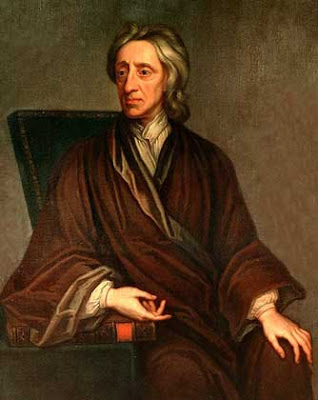 Many will point to Locke’s Two Treatises on Government where he wrote that governments are instituted to secure people's rights to ‘life, liberty, and property,’ stating that Jefferson cleverly tweaked the last part. If that were so, as some argue, Jefferson meant that pursuing happiness is synonymous with acquiring property, AKA wealth. Of course many argue that he specifically changed the wording to declare that property/wealth was not as important as “happiness.”

Interesting fodder for debate. But the truth is that Jefferson was not cleverly coining a phrase or tweaking Locke. Rather he was using a phrase created by several past philosophers, including John Locke in his 1690 essay Concerning Human Understanding. Few now deny that this is where Jefferson largely obtained his ideals and directly quoted from, especially since he blatantly said so.

The necessity of pursuing happiness [is] the foundation of liberty. As therefore the highest perfection of intellectual nature lies in a careful and constant pursuit of true and solid happiness; so the care of ourselves, that we mistake not imaginary for real happiness, is the necessary foundation of our liberty. The stronger ties we have to an unalterable pursuit of happiness in general, ….. the more are we free from any necessary determination of our will to any particular action, ….. and the nature of the case demands, we are, by the necessity of preferring and pursuing true happiness as our greatest good, obliged to suspend the satisfaction of our desires in particular cases.

The above quote by Locke is only a tiny part of his essay. The meaning, however, is clear and succinctly stated by Jefferson’s “Life, Liberty, and the pursuit of Happiness.” The three central realities, these “unalienable rights” are tied together but also listed in order of importance. Life must come first, naturally, since without life none of the others can exist. Liberty (freedom) is the soul’s need to form your own thoughts and not be oppressed, and it must exist for one to walk the path of happiness. But one’s perceived right of “happiness” should not hinder or infringe upon the liberty or life of anyone else. See?

All 3 are innate human drives. But note that he did not just say “happiness” but rather the “pursuit of happiness” where pursuit is used as a noun. Happiness can be nebulous at best, is objective, and will certainly be upset from time to time. The pursuit of it is our quest, our occupation if you will, and is the constant. THAT is what we must have the liberty to do: pursue happiness.

So, was Jefferson, et al preaching the attitude of doing whatever we want to make ourselves “happy”? Was he a hedonist telling us freedom was to go all out, often at the expense of others, to be happy?

Not at all! Locke is adamant that true and solid happiness is a result of intellect and control, employing careful self-examination to discern imaginary, fleeting happiness from that which is necessary to free us from enslavement to harmful desires. Aristotle wrote, “the happy man lives well and does well; for we have practically defined happiness as a sort of good life and good action.” Alexander Hamilton and other FFs referred to “social happiness” as central to the Declaration’s themes. Liberty, as desired by our FFs, was the freedom granted and upheld by government to allow individuals as part of a societal whole to pursue the quest for happiness. In short, we are not guaranteed happiness, but should be guaranteed the ability to freely find whatever will make us happy, remembering that happiness is bound with civic virtues of moderation and justice. 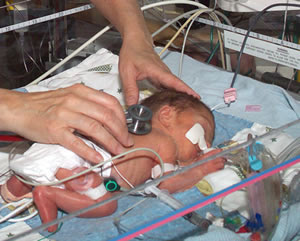 And there, my fellow Americans, is your history lesson for the day! Whew! How do you pursue happiness? For me it is first and foremost my family, and possessing a servant’s heart for them and my church. Next comes my professional life, both in my writing to bring pleasure to readers as well as myself, and in caring for the babies as an RN. I have always felt blessed to be led into a career that brings me incredible joy while offering a vital service. Writing happy, romantic stories is equally a blessing, and I pray to be able to do both for many more years to come!