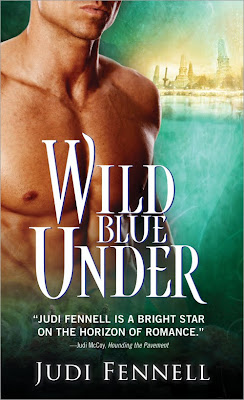 To celebrate, a couple of my characters decided they’d dive in to spread the word since, after about 25 blogs, I think I might have run out of things to say.

First up, Chumley Masticar. (A deluxe, beautifully-appointed saltwater aquarium is wheeled onto the deck; inside, a sucker-less remora swims over multicolored coral and through a lava sculpture reminiscent of the Arch at Land’s End.)

“Chumley Masticar here. You all might remember me from my save-the-Mer-

world role in In Over Her Head, yes? Where I enabled hero Reel Tritone to save the girl, the diamonds, and his life?” He nods his neck-less head. “And what thanks do I get? A marble bust in downtown Atlantis? A celebratory parade? Dinner at the palace?”

He shoves his dorsal fins to his hip area. “Hmmph. I think not. No, I get supplanted. Supplanted, I tell you. By some know-it-all, fly-by-night seagull. A

seagull. Can you imagine?! This is a sea world we’re talking about. Mers. The Rulers of Atlantis. And they give the starring role to a bird? What’s this world coming to?”

Figure-eights froth bubbles to the top of the tank. “I’ll tell you what it’s coming to. A Mer Prince heading onto land to return a half-Mer princess to Atlantis. A half-Mer princess, mind you, who A) doesn’t know she’s half-Mer, B) doesn’t believe a word he says and C) is allergic to the ocean. You wanna tell me how anyone thinks this is going to work?” Chum has to untie the figure-eight he’s tied himself into. “With a seagull.”

(Shuffling and squawking sound from inside the bridge then the door swings open.) 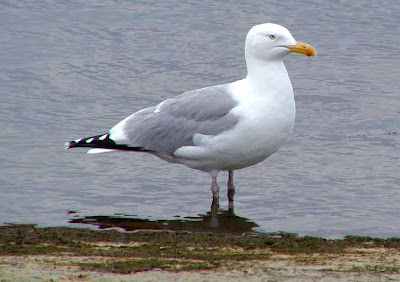 “Can it, fish.” The herring gull flutters over to the tank and swishes the top of the water with his yellow bill. “Look, you had your time in the sun when In Over Her Head came out. Now it’s my turn. So shut your trap.”

The Chief of the ASA braces his webbed feet on the corners of the tank, gives his back a swipe with the top of his head then clears his throat. “Hello. Allow me to introduce myself. I’m Livingston, charged with the protection of Mer Heir, Rod Tritone, on his land-based mission to recover the lost princess.”

“Lost. Hmpph,” A bubble explodes on the surface of the water.

Livingston flaps his black-tipped wings once and settles himself on his belly in the water and proceeds to paddle around the tank. “As I was saying, I am happy to say that, although it was touch-and-go for a while, what with dive-bombing peregrines and an albatross with an agenda, all’s well that ends well and our Prince and his Princess live happily ever after.”

“Geez. Give away the whole plot why dontcha?”

Livingston aims a quick kick of his webbed foot at the remora. “It’s a romance, twit. Of course they end up happily ever after. I didn’t give anything away.”

“Uh huh.” Chum pops out from under the arch. “And the albatross part? The peregrines? The high-speed chase—”

Livingston’s foot pins Chum’s tail against the side of the glass. “I didn’t say anything about a high-speed chase. You did.”

That shuts Chum up. A first.

“Anyhow.” Livingston does a wing-over-wing to settle those appendages on his back. “As I was saying. All’s well that ends well, and if you’d like to see how it ends well, head to your local bookstore or check out your favorite online bookseller (including Target – something new for this book!) and see how this real fish-out-of-water story turns out. Oh, and feel free to share your favorite scene—or better yet, your favorite sidekick—with us. And thanks for sharing this special day with Rod, Valerie and I.”

Chum wriggles free and pokes his head over the edge of the tank, sending water sloshing over the side. “Don’t forget me!”

Livingston fluffs his breast feathers. “Sadly, I wish I could.”

Okay, so maybe I should have come up with something. Those two can’t be in the same part of the ocean together without causing a scene; I don’t know what I was thinking letting them handle this.

Here’s an excerpt from Wild Blue Under:

“How in Hades am I supposed to make Valerie come with me?” Rod asked his reflection in the appliance’s stainless-steel door.

“You could always kidnap her.”

Rod stared at the reflection. Talking appliances? If Humans could design something that complex, surely they could fabricate something other than plastic to keep their food in.

Then he saw movement behind him and turned around.

And if his hunch was right… “Livingston, I presume?”

The bird confirmed his identity by stretching his wings, revealing the legendary star tattoo on his breast, then inclined his head in the traditional acknowledgment of royalty.

Forget niceties. The Council’s Chief of Air Security had only one reason to be here. The renowned aerial spy didn’t “happen” to show up inland without a very good reason: like making sure Fisher’s son was following orders.

Zeus. Could someone cut him some slack?

“What do you want, Livingston? And what were you doing in Valerie’s store earlier?”

The herring gull ruffled his black-tipped wings before he hopped off the window ledge onto the dining table. “In her store? I have no idea what you’re talking about.”

“You expect me to believe that?”

Livingston shrugged, then worked his gray feathers back into place with his yellow beak. “Hey, what you believe is up to you.”

The gull turned his head to the front, the red spot on his beak always a perfect way to distract someone.

But not Rod. He knew all the tactics—had studied each and every one. And if The Council would only remember that, he wouldn’t have to deal with the Chief of the ASA.

Of course, that put the kibosh on the report of the rogue gull in the store.

“What were you doing there, Livingston? You scared her and made a mess of the place.”

“Rod, I wasn’t anywhere near her today. Haven’t been for a few weeks.”

“Oh, really? Then you want to explain who decided imitating a stuffed seagull would be funny? She ended up getting hurt.”

Ace? Hardly. That gull had been a menace at flying, not an ace. “Not if I get to him first.”

“Oh. Good. So, you got anything to eat around here? I just flew in from Bermuda and, boy, are my wings tired. Cod? Herring? Toasted cheese sandwich?” The bird kicked one webbed foot over the other and brushed his forehead with his wing. “Trifle warm here, isn’t it?”

Rod opened a cabinet and grabbed the tin of sardines he’d planned to save for a snack, offering them instead to Livingston. Bribery might work. “Yes, it is. Much warmer than we’re used to, especially without sea breezes. Which, again, brings up the reason you’re here. And how long are you planning to stay?”

The bird slurped one of the sardines down with a satisfied gulp. “Those are good. Nicely salted.” He helped himself to another, then settled down next to the tin. “So, how’s it going?”

Rod exhaled. The bird was a well-known interrogator, and if he didn’t want to squeal—or squawk—nothing could make him. “It’s… going. Not with quite the results I had anticipated, but I’ll get her to come. Even if I have to toss her over my shoulder.”

“That well, huh?” Livingston grabbed another fish. “Caveman tactics don’t go over so well these days, I hear. You could always tell her the truth.”

“Sure, Livingston. Water-breathing people with tails who live in Atlantis go over so well with Humans. Especially without proof."

“Hey, you don’t have to get snippy with me. It was only a suggestion. I do work in an advisory capacity to the High Councilman, you know.” The gull snorted, then coughed out the sardine. “Ugh. That’s not pretty.” He fluffed it off the table with his wing. It landed on the floor with a splat.

Both of them looked at the gelatinous mess, then at each other.

“You want to get that?” Rod asked.

“Ummm.” The gull spread his wings, turning the black tips upward. “Do you see opposable thumbs?"

Rod sighed and shook his head, grabbing a paper towel from beside the sink. The gull had climbed the ranks of the Sky Service faster than anyone in the agency's history. His ego was legendary; cleaning up a mess was obviously beneath him.

Not that Rod was in line to be the ruler of all the seas or anything.

So, favorite sidekick. Doesn't have to be from my book, or yours. What about movies, tv, stories, etc.?