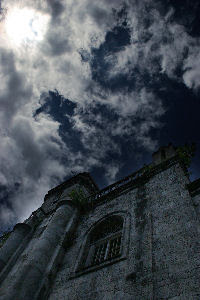 I'm a big fan of writing that gives a strong sense of atmosphere. Some of the best books in the world feature places that seem so real to the reader, whether imagined or a true place, that the readers feel as though they have been there. Who has heard of Jamaica Inn who does not remember Daphne DuMaurier's rendition of it? And what would Wuthering Heights be without Emily Bronte's deft hand at delineating the Yorkshire moors?

I suppose it is that kind of writing that influenced me in producing Darkefell Castle, the folly tower, the woods and Staunby Force in Lady Anne and the Howl in the Dark. But atmosphere is much more than just describing places; it is also in reproducing the kind of terror we often experience when faced with the unknown and our darkest fears. Consider this piece early in the novel as Lady Anne Addison arrives at the imposing and masterful Marquess of Darkefell's estate late at night:

As Anne walked, the darkness gradually became more profound, progressing from charcoal murk to pitch blackness. Trees overhung the road and newly sprouted leaves whispered in a strengthening breeze; despite the steady scuffle of her footsteps, Anne heard the faint rustle of animals in the bushes that encroached the narrowing road. On the wind the mingled scents of smoke from hearth fires and the green aroma of growing things drifted. Her pace slowed and became uncertain as darkness closed in. It occurred to her for the first time that she only had the fellow at the post house’s word for it that this was the road to Darkefell Castle. Surely, if it was, she should be there by now? Lydia claimed in her letter that the castle was only a mile from Staunby. She had gone that and more. But why would the man lie?

Clouds had closed in as the breeze sprang up, but now a faint silvery glimmer displayed the cloud shapes and then broke through, the rising half moon lighting the landscape in tones of gray: dove, charcoal, slate, and smoke. The road ahead rose, misty, ahead of her, so she gathered her courage and strode onwards, upwards, grateful for the faint glow of moonlight. At least walking would keep her warm. After another half mile the night noises ceased and the only sound was her sturdy traveling shoes scuffing the hard-packed road surface. It was silent until a howl cut the hush; the eerie blade of sound sliced through the night, a preternatural wail that crept up her back and caused the skin on her arms and neck to pimple in shivery waves under her cloak and shawl.

“I am not afraid,” she said, aloud, her voice strong and steady.

The baying echoed again through the night, and Anne forced herself to walk on more quickly. Dogs; the howling must be dogs, for there was no other rational explanation. Dark shapes loomed some distance ahead, shadowy, blocky squares that were likely buildings and black masses that might be trees; the surface under her feet had changed, subtly. Was she still on the roadway, or lane, or whatever it was? Her pace slowed, and her foot caught on a tuft of grass; she stumbled, then righted herself, stopping to try to get her bearing. It was too dark, but some of the shapes did appear to be square, and she thought she could see a glimmer of light in the distance.

Beyond the other shapes it appeared that a tower pointed to the heavens, blotting out the shred of moonlight she had been depending upon for courage. The square shapes ahead must be the buildings of Darkefell Castle or Ivy Lodge, she cared not which, but even if they were farm buildings, she would cast herself upon a farmer’s mercy and sleep by his hearth until morning. She crept forward, hoping that a faint glimmer of what looked like a lantern was not an illusion brought about by her exhaustion. She was on grass now, and dew dragged at her cloak and skirts, coated her stockings, and even seeped through the sturdy leather of her shoes.

Another howl, an eerie sound like a blend of human voice and animal clamor, tore though the night, and she hastened her step, calling out, “Hello… is anyone there?” She staggered down a bit of a hill. “Hello? I fear I’m lost! Hellooo!”

The only answer was a scream, a sharp shriek of fear or pain, Anne thought, and then silence. Utter, dead silence. Trembling, she stopped, hearing only the blood pounding in her ears and the ragged gasp of her breath. Her eyes wide, she stared into the night, waiting. As her heart calmed, she could hear a rustling sound, then footsteps retreating, a wheezing breath sighing on the stiffening breeze. She staggered into motion again, heading in the direction of the scream. It had been a woman’s cry, of that she was sure. Whomever made that sound was in dire need of assistance.

She lurched into longer grass, wet, tangled, and dew-laden from the heavy mist of evening. Drifting on the night air was a sound. What was that? A moan of pain? Oh, no! The landscape was hilly, and Anne tumbled to the ground, turning her ankle and wrenching her shoulder. But she staggered to her feet, gathered up her cloak and skirts and stumbled on, toward the sound. The moaning was faint, now, as if the woman was giving up the ghost.

A soft moan nearby was her only answer. Blindly, Anne turned toward the sound and, arms outstretched, felt past some bushes. The glimmer of lantern light had disappeared and darkness had closed in again, as she wandered close to a brushy area. “Where are you? Help me, so I can help you!” Her voice echoed in the darkness and she suddenly felt silly, with a growing conviction that there was no one, it was her fatigued imagination working. But no, she was not that inventive. There had to be someone there! Buoyed by her own common sense, she moved forward, steeling her mind to think rationally.

But all sound had hushed. Slowly, carefully, she moved forward, hands still outstretched in front of her. Impatient with the slow pace, she began to walk more quickly and stumbled through some bushes and over something, falling to the ground and crying out in pain. “What on earth did I trip on?” she said, feeling under her feet.

It was something soft… an animal? The smell of blood filled her nostrils. A dead animal? Taking a deep, shuddering breath, she felt the form; it was not an animal. There was cloth. Clothing. Skirts. It was a woman!

I do hope that this excerpt shows the kind of atmophere I was trying to create, the midnight terror, the fear of stumbling along in the dark, the claustrophobic sense of being alone, and yet beset by nightmares. I hope I have succeeded??