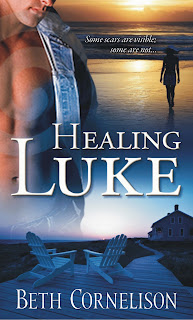 I thought it might happen. Even planned it, really. And earlier this week, it happened!
What happened, you ask? I had a reader/reviewer, who got an advance copy of HEALING LUKE, email me to ask if Luke's brother, Aaron, and their father, Bart, would get stories of their own. As an author, there's not a better compliment than to have a reader ask to see more from your secondary characters. (Well, there is "I stayed up all night to finish the book!" and "I'm going to the store now to buy your whole backlist!" ...but wanting stories for the secondary characters is right up there!)
Knowing that a reader not only fell in love with your characters in THIS book, but that they enjoyed your writing enough to want more is heady stuff. I'm flattered beyond belief.
It also reinforces my belief that memorable secondary characters are almost as important to a story as having a hero and heroine the reader can love. In fact, I have a workshop that I give to writers' groups called "Secondary Characters: The Good, The Bad and The Quirky."
Good secondary characters have depth, interest, unique traits and–perhaps most important– they have a function in the story and add something to the book. For example, in the opening chapters of HEALING LUKE, Luke's father is his adversary in terms of Luke's initial goal, remaining a recluse and avoiding failure. Bart helps get the plot rolling by hiring Abby to help with Luke's physical therapy. Throughout the course of the book, as Luke's relationship with Abby grows, we also see his relationship with his father evolve. By the end of the book, Luke is looking to Bart for advice in the role of a mentor. Bart's character never changes. He's essentially the same concerned and loving- if a bit out of touch- father he was at the opening of the book, but he plays an important role in the advancement of the plot and highlighting aspects of the conflict that Luke must face. Bart is not just window dressing. He has his own flaws, backstory and ways of dealing with issues that are uniquely his. The same can be said for Luke's brother, Aaron, who plays an even bigger role in the book than Bart.
And the answer to that question the reader asked? Will Bart and Aaron get their own books? I certainly hope so. I have ideas for Aaron's book, even had most of it written a couple computers ago. (I'm afraid that file may be lost in the great beyond now...) But some day, with luck, two more awesome Morgan men will have a chance to have their story told!
What secondary characters have you always wanted to see stories written for but so far haven't?
Happy Wednesday and happy birthday to my very own hero...my hubby Paul!!