By Kendra Leigh Castle October 01, 2008
Yes, we have a sequel! The Launch Week fun continues today with authors Kendra Leigh Castle, Michele Ann Young, and Linda Wisdom, and if you've got a hankering for men in breeches, witches in stillettos, or werewolves with brogues, then you've come to the right place to party! 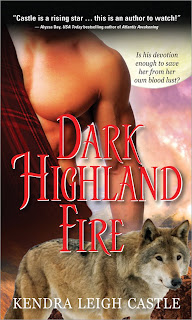 First up is me, Kendra Leigh Castle. My book Dark Highland Fire, the second installment in the MacInnes Werewolves series, hits shelves today! I had a blast writing this book, probably because Rowan and Gabriel were an ideal hero and heroine to work with. The sparks flew fast and furious the entire time, and as a result, I still miss playing with them! Here's a quick description of the book that I just discovered is Night Owl Romance's Recommended Read of the Week (that obnoxious noise you may be hearing is just me doing some kind of Primal Dance of Joy, so fear not):

Gabriel MacInnes has led a charmed life. A Highland werewolf of Alpha lineage, he'd always thought that, as the second son, he would never have to worry much about responsibility. But with his Pack now squarely in the sights of an ancient and rediscovered enemy, everything has begun to change.

Exiled from the Drakkyn realm, on the run from the dragon prince who claims her as his own, the last thing Rowan an Morgaine wants is to deal with a bunch of overbearing shifters in the middle of nowhere. But when her hiding place on Earth is discovered, and with blood the only thing that can restore her waning power, the fiery demigoddess has little choice but to accept Gabriel as a protector ...

As the Earthly and Drakkyn realms converge, Gabriel and Rowan must decide how much they're willing to sacrifice for fate...and for one another.

I hope some of you will take a chance on the book Bitten By Books called a "magical and colorful work of artI'll be giving away a signed copy of Dark Highland Fire to one lucky commenter today, so be sure and say hello to be entered for a chance to win! 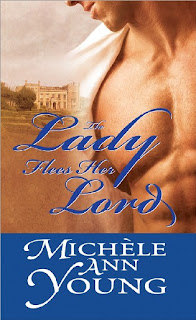 My turn to hand out the the champagne, or claret if you prefer. There are party favors too!! One lucky commenter will receive a notebook from the Jane Austen Center in Bath. Another will receive a copy of The Lady Flees Her Lord.

She’s desperate for peace and safety...Lucinda, Lady Denbigh, is running from a husband who physically and emotionally abused her because she is unfashionably plump and has failed to produce an heir. Posing as a widow, she seeks refuge in the quiet countryside…

He’s returned from the wars, wounded and tormented...
Lord Hugo Wanstead, with a wound that won’t heal, and his mother’s and Spanish wife’s deaths on his conscience, finds his estate impoverished, his sleep torn by nightmares, and brandy his only solace. When he meets Lucinda, he finds her beautiful, body and soul, and thinks she just might give him something to live for…

Together they can begin to heal, but not until she is free of her violent past...

According to Yankee Romance Reviewers "Our author has given us a little slice of Heaven molded from a minuscule slice of Hell. Our emotions are played like a violin with endearing words, breath taking scenes and a virtuous sense of right and wrong. The authors writing style is highly comparable with Jane Austin but with more of today's romance mentality. Lush and loving, heart wrenching beautiful, one could only hope to have a Lord Hugo Wanstead to desire us so truly and deeply"

All About Romance says: The best part of the book was Lucinda. She isn't feisty or silly - she comes across as careful and shrewd. Lucinda is warm and loving and she will make Hugo a wonderful wife.

Join the fun and party on.