A Look Inside the Creation of DOUBLE ENCHANTMENT, By Kathryne Kennedy 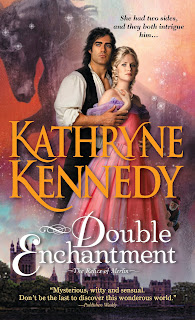 I'm gearing up for the re-release of the second book in the RELICS OF MERLIN series, DOUBLE ENCHANTMENT, and I just launched a fabulous new contest on my website! In each of the Relics books, one of Merlin's relics are featured, and in DOUBLE ENCHANTMENT it's a garnet broach. Although I wish I could craft the jewelry I created in my imagination, I settle for the jewel, and buy a piece that speaks to me of fantasy and the Victorian era. Check out the contest on my website to see if I chose correctly: http://www.kathrynekennedy.com/contest.html

If you haven't read the Relics of Merlin series yet, here's a bit of inside information about DOUBLE ENCHANTMENT, re-releasing in March 2013:

DOUBLE ENCHANTMENT is the second book in the RELICS OF MERLIN series (although since the relics primarily connect them it easily stands alone).  Jasmina is an earl’s daughter who cast a simple illusion of herself, unaware that the jewel in her possession was one of Merlin’s relics…and the spell took on a life of its own. Sterling is a were-stallion who meets Jasmina’s illusion and marries her. When he finds out the truth and meets the real Lady Jasmina, life starts to get very complicated for them both.

I chose the title, DOUBLE ENCHANTMENT, because all the books in the RELICS OF MERLIN series have some form of ‘enchant’ in the title, and since Jasmina made a twin of herself….

I got my idea for the RELICS OF MERLIN series because I tried my hand at writing a Victorian historical romance, and the entire time I was writing it I kept saying “What if?” (I just couldn’t turn off the fantasy lover in me).  It always seemed unfair that males inherited the titles and land, so wouldn’t it be wonderful if women had power? Not in strength of arms, but with magic. So, regardless of sex, the child who had inherited the magical power would be heir. And of course, those with more magical abilities would hold the highest title…so the world of Merlin’s Relics was born.


My  favorite research book for DOUBLE ENCHANTMENT was WHAT JANE AUSTEN ATE AND CHARLES DICKENS KNEW by Daniel Pool. I used INSIDE THE VICTORIAN HOME by Judith Flanders to develop the historical character of not only Jasmina, but also her father and mother as well.

I created maps of my alternate Victorian London to keep track of changes to name places (Pall Mall became Pall Mage, Belgrave Square became Gargoyle Square, and I added the Hall of Mages next to Buckingham Palace, for example) because I figured that with the influence of magic, the city would develop differently. I also have a ‘map’ of a Victorian mansion, with the type of furniture for each room listed (In England, the first floor of a home is the ground floor, and the first floor is called the second, which is often confusing to my American mind :}).  I also have a chart with hereditary titles, how each peer is addressed, and their level of magic. I keep a dictionary of my own words, because I often make them up; and a chart of the relics, when they were discovered, what type of jewel and spell (if known).


During my research, I was surprised to discover such early use of water closets, especially one that used dirt to absorb the refuse (called an earth closet).  Since neither of them was widely used until later in the century, I usually refrain from mentioning them in my books.

Victorians were known for their prudery. And yet the bustle developed because men admired the sway of a woman’s backside. And isn’t it interesting that although women were clothed head to toe, their bosoms were usually on display, and they had slits in their drawers?

I hope you enjoyed an inside look at how I wrote DOUBLE ENCHANTMENT, and if you've already read the series, I do hope you pick up the re-release with it's fabulous new cover, and give someone who loves to read a bit of magical romance.

As Always,
My Magical Best,
Kathryne