New Release: What to Do with a Bad Boy 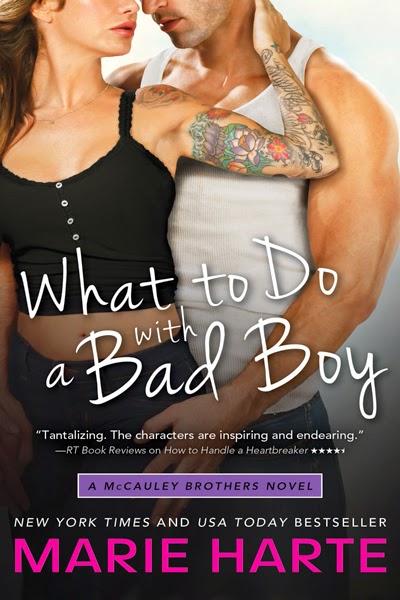 The End has Come.

I can’t believe the last book in my series is already here. It seems like the first one just came out. Oh yeah, it did. In June. *grin*

I’m a sucker for series romance. I especially love to have a series all tied up, so I’m happy to say that all the McCauleys found their happily-ever-afters. There are no hanging plots, no unresolved issues the McCauleys need to handle. And if you’re like me and like to have all your books in the same format, you don’t have to wait for ebook or print. They release at the same time.

Yeah, I’m a bit weird about that. It freaks me out to have a series of mixed formats, ebook and print. Either all ebook or all print. Mixing? Ack.(So sometimes when I can't wait and order an ebook, I then turn around and buy it in print to complete my series. I know. I'm warped. LOL)

I will say ebooks have saved my tendency to hoard paperbacks. And yes, I’m way off track, but as a writer and reader, I swing wildly in favor of reading a series until the end, and of keeping my favorite books. Right now, I have the McCauley Brothers series front and center in my office in mass market print, right alongside all the trade size books my stories normally come packaged in when not in ebook.

It’s been a thrill, and I’m doubly happy that What to Do with a Bad Boy releases on November 4th. My birthday!

To celebrate, one lucky commenter will win a signed print copy of Ruining Mr. Perfect, the predecessor to What to Do with a Bad Boy. I’ll pick the winner* Nov 7th, so you have time.

*shipping only to continental U.S. International winner will receive an ebook

Here’s a small excerpt for you from What to Do with a Bad Boy. Enjoy, and good luck!

Mike McCauley stood in the doorway, glowering like a demon. How everyone thought he was the nice McCauley amazed her, because she saw nothing nice or saintly about him.

“And here’s my answer,” he growled in a deep voice that set her on edge.

J.T. grinned at him and her and wiggled his brows.

She flushed and hated that she felt discomfited. “Who the hell invited you?”

Mike entered and closed the door behind him. He wore faded jeans and a tee-shirt under a denim shirt and sleeveless jacket. His scuffed work boots and rough hands attested to the fact that he did more than staple papers for a living. From what she knew, he and his father owned a construction company, one her father wanted to hire to do some work on the garage.

Over her dead body.

At thoughts of dead bodies, she noted the anger in Mike’s gorgeous face. Just like his son, he had “lady-killer” written all over him. Short black hair, bright blue eyes, a square jaw, and full, firm lips. He made her feel small and had as much, if not more, muscle than J.T.  God, his hand could probably span her entire face. Big hands, big feet, big…  She jerked her gaze up from where it had been wandering, mortified that he raised a brow, having seen her study.

Burying her embarrassment behind the attitude she’d honed from years of practice, she growled back at him, “I’m running a business. I don’t have time for McCauley theatrics. What do you want?”

“I want to know why my son asked me to pass the f**king potatoes last night.” He crossed massive arms over his behemoth chest. “Something he said about bowling with you two nimrods told me you might have something to do with his mouth.”

J.T. laughed then coughed when Mike frowned at him. “Oh, er. Well, I have to get back to work.”

He winked. “Gina. Yeah. Don’t mess with my sister, Mike, or I’ll hurt you. And for some weird reason, I like you. Later, Sis.” Before he left, he gave a less than subtle nod to Mike and grinned.

Once he’d gone, the office felt oppressive under the silence and their dueling scowls.

She didn’t like him towering over her desk. Over her. She rose to her feet and wondered if standing on her chair to gain a height advantage would seem too juvenile. “Well what? J.T. and I met Vanessa and Cam for a game of bowling. Colin was there. We might have let a few words slip, but it was an accident.” Through the door, a loud curse sounded. “I work in a garage. We’re not having a tea party, McCauley. Grow a set of stones and deal.”

He took a step closer, and she had a hard time looking away from his eyes. Man, she’d never seen a blue so…blue. “My name is Mike.”

“Mike.” She licked her lips, not liking the sudden dryness. To her consternation, his gaze fixed on her mouth. “So, uh, get over it.”

“Right.” Mike took a deep breath, then let it out and stepped back. “Quit cursing around my kid.”

“I’ll try.” For once he hadn’t ordered her to stop seeing Colin. “I don’t know when I’ll be seeing him again, so it probably doesn’t matter.”

Actually, Abby had sent the invitation via email that morning. “Oh. You’re going?”

“Yeah.” That handsome smile he so often wore appeared, showing a dimple in his left cheek.

“But I know how I scare you, so I don’t figure I’ll see you Wednesday night. Don’t worry, I’ll tell Colin you were busy.”

“Scare me? You?” She huffed. “In your dreams, Mike.” She moved around the desk to poke him in his rock-solid chest. “I’ll be there Wednesday. Try not to be more of an ass than you can help. I mean, your kid will be there. Don’t want to show Colin what you’re really made of.”

He leaned down, so that his nose was all but touching hers. “Sweetheart, you couldn’t handle what I’m really made of.”